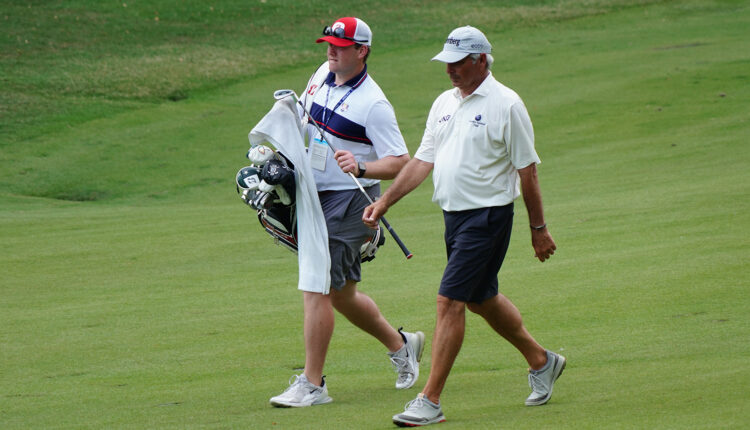 DULUTH, Ga. – As Fred Couples prepared for his second PGA TOUR Champions start of 2022 at this week’s Mitsubishi Electric Classic, he was in the market for a caddy.

There was one box to check, though. Joseph has caddied for Charlie Woods at the past two iterations of the PNC Championship, and Couples wanted to ensure that Charlie approved of this week’s assignment at TPC Sugarloaf.

“I didn’t know Charlie’s cell number, but I got in touch with Tiger,” said Couples. “JT (Justin Thomas) was on the thread, and they didn’t reply. Maybe they thought I was teasing a bit.

‘But then I said, ‘Listen, Tiger, I need to make sure Charlie is OK with Joseph caddying for me in Atlanta.’ He got right back to me, said, ‘Just talked to him. He’s fine with it.’”

With the stamp of approval, Joseph made the trip to Georgia for this week’s assignment.

Joseph recently graduated from James Madison with a marketing degree and has gained experience caddying at Winged Foot GC and Bull’s Bridge GC in the New York City metroplex.

“I have a little bit of knowledge, but this is a new ballgame here, without using the rangefinder and stuff,” said Joseph. “Learning the ropes a bit, but I talked to my dad and when I walked the course the other day, he gave me some good knowledge. He’s been helping out when he can.”

Couples informed others before event that “I’ve got LaCava caddying for me,” without clarifying that Joseph would be on the bag, as opposed to Joe, who looped for couples for 22 years.

He poked fun at his game – “I’m hitting it so bad right now that poor Joe is all over the lot” – but is coming off a respectable T17 in his 2022 PGA TOUR Champions debut at last week’s Insperity Invitational and demonstrated his trademark , seemingly effortless action as he cajoled with Thursday pro-am partners at TPC Sugarloaf.

He also caught similarities to the routine of the ‘old days’ with Joe Sr. on the bag.

“I call and say, ‘Look, find a hotel room near me; get a rental car,’” Couples said. “Sure enough, he gets a rental car, picking me up, driving me to dinner. Nothing has changed there. So I know I’ve got a good caddy and a good kid. I don’t boss him around. I used to boss his dad around a little bit, and that didn’t go so well for me.

“I’ve known him since he was 4 years old … I know his father like the back of my hand; he’s the spitting image of him. I have nothing to worry about, and so it’s very fun for me. He’s got it down; he’s walking the course … when you’re working in Tiger and Charlie’s group, there’s really no screwing around, is there?”

Couples noted that golf takes third priority when it comes to topics of conversation—there’s Joseph’s life and plans, as well as sports in general.

“We’ve already been talking about the (New York) Rangers and Madison Square Garden, which is where his dad was the other night,” said Couples. “He’s already on his way down there (Thursday night) for the hockey (Game 2 of the NHL’s Eastern Conference Quarterfinal matchup between New York and Pittsburgh).

“We’ll talk about him, what he’s doing, sports, and then we’ll get into TPC Sugarloaf. Hopefully can play some good golf.”

As he prepared for Friday’s opening round of competition, Joseph noted he had received some advice from his dad, as well.

“Make sure you always have a ball in the pocket,” Joseph said. “Make sure the towel’s always wet.”

To engage the ‘will of the voters,’ you also have to empower them | Opinion