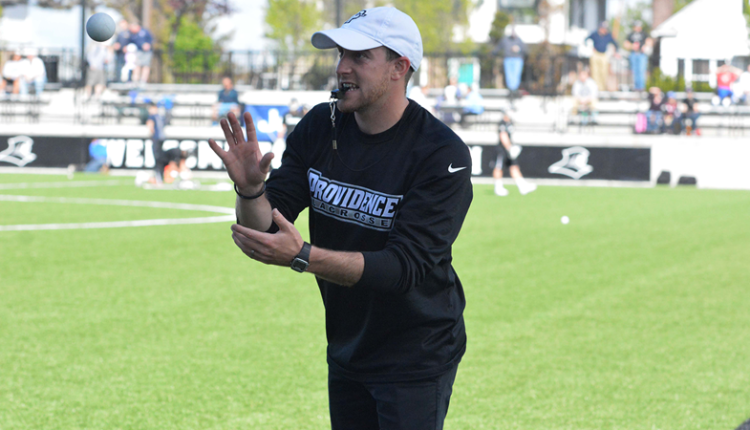 “We are thrilled to officially welcome Matt Francis, his wife Auden and daughter Mackenzie into the Lehigh Lacrosse family,” said Cassese. “Matt brings a wealth of knowledge and 12 years of coaching experience with him to Lehigh. He is a true professional in this business, a tireless recruiter and someone who cares deeply about his players and helps them to develop as lacrosse players, as teammates, as leaders and as men. He is so versatile as a coach with experience coaching defense, man down, faceoffs, goalies, riding, clearing and the substitution game. And, his positive attitude and infectious energy will make an immediate uplifting impact on our Lehigh Lacrosse culture.”

In six seasons at Providence, Francis worked with the defense, goalies and faceoff specialists. The Friars qualified for the Big East Tournament in three of the five seasons a postseason championship was held. With Francis on staff, Providence produced 16 All-Big East honorees, highlighted by Big East Defensive Player of the Year and two-time All-American goalie Tate Boyce. The Friars ranked 10th in the country in scoring defense in 2019.

“I’d like to thank Murray H. Goodman Dean of Athletics Joe Sterrett and Smith Family Head Lacrosse Coach Kevin Cassese for their belief in me and the tremendous opportunity to join the Lehigh Lacrosse family,” said Francis. “Lehigh University is an elite institution, and I couldn’t be more thrilled to join the men of Lehigh Lacrosse on their journey of chasing Patriot League and National Championships. I will be relentless in my effort to help our student-athletes achieve their dreams , both on and off the field, and I cannot wait to get started in Bethlehem.

“Furthermore, I’d like to thank Coach Chris Gabrielli for his mentorship during our six years together in Providence. I am a better coach and a better man because of our time together, and I am truly grateful.”

In 2017, Francis was part of a staff that was named Big East Coaching Staff of the Year. The Friars’ 10 wins that season tied a program record, while Providence achieved the program’s first-ever top 20 national ranking. Providence had two wins over nationally-ranked opponents, including a Big East Semifinal victory over No. 15 Villanova to advance to the title game for the first time in program history.

Prior to his stint at Providence, Francis spent four seasons at Binghamton, where he served as the Bearcats’ recruiting coordinator, defensive coordinator and faceoff coordinator. He helped mentor 12 All-Conference performers at Binghamton and six America East All-Academic honorees. In 2013, the man-down defense ranked first in the nation at 86.2 percent.

Francis began his coaching career as an assistant at his alma mater, Marist, helping the Red Foxes to back-to-back MAAC semifinal appearances. In 2011, Marist owned a conference-best goals against average of 8.99.

Francis is a 2010 graduate of Marist, where he enjoyed an impressive playing career as the Red Foxes’ faceoff specialist. As a junior in 2009, Francis ranked seventh in the nation in faceoff percentage (.576) and fifth in groundballs per game (6.46). In 2010, Francis won 158 faceoffs and helped guide Marist to his first MAAC Tournament appearance since 2006.

Off the field, Francis was a second team CoSIDA Academic All-American as a senior in 2010. Francis earned his bachelor’s degree in biomedical sciences from Marist in 2010 with minors in psychology and business administration. He added an MBA from Marist in 2012 with an advanced certificate in executive leadership.