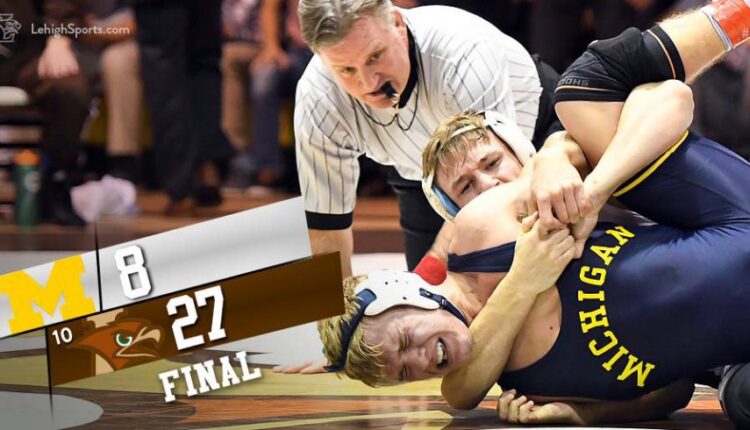 Rivalry week got off to a rocky start for the Wolverines with Michigan No. 4 wrestling team winning their first L of the season and beating 8 of 10 games against the No. 10 Lehigh Mountain Hawks at Leeman Turner Arena at Grace Hall lost.

Michigan may not have the same pedigree as Big Ten Wrestling Blue Blood Iowa or the youngest juggernaut Penn State, but the Wolverines came into the season with five ranked wrestlers on the grid and high expectations for the season.

However, things quickly got out of hand on the road trip to Bethlehem, Pennsylvania: The Wolverines dropped each of their first five games, and that left the router on. Despite the teams splitting up the four bouts in which ranked wrestlers competed against each other, Lehigh quickly took an 18-0 lead during the break and Michigan never recovered.

“There’s no question that wrestling had a huge advantage here at Grace Hall,” said Lehigh’s head coach Pat Santoro. “It was good to have the fans behind us and our boys really fed on it.”

Logan Massa No. 3 and Adam Coon No. 2 made the only wins for this team, beating high-ranking opponents at 165 pounds and heavyweight, respectively.

Most of the day’s games were close competition, as you can expect from two high-level teams. Only two games ended in bonus points, including Massa’s technical fall from Cole Walter No. 18. At 133, Lehigh’s No. 3 Scott Parker Mike Volyanyuk was stuck in the middle of the second half.

Like Ohio, Michigan won its home opener against Arizona, but only 21:18, compared to the 31:12 drubbing the Buckeyes presented to the Sun Devils. Like the state of Ohio, the Wolverines will be in action at the Cliff Keen Las Vegas Invitational December 1-2.