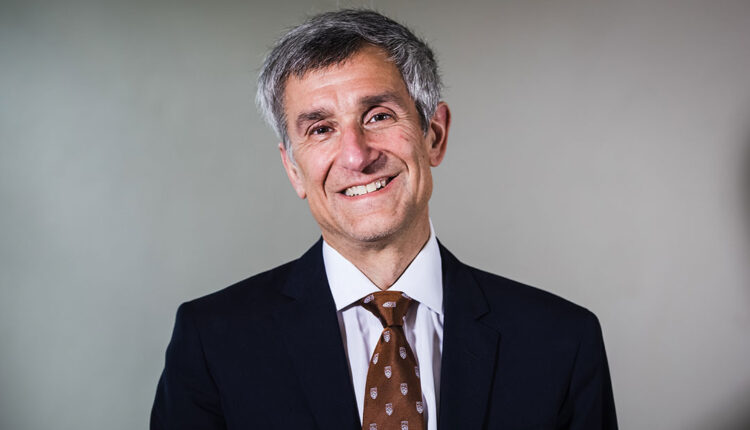 After graduating with honors from Lehigh in 1982, Helble completed his PhD in chemical engineering with a minor in Spanish from the Massachusetts Institute of Technology in 1987. From there he worked for several years in the private sector as a research assistant at Physical Sciences, Inc., during which time he was also on leave for several months as a research policy officer at the US Environmental Protection Agency. He later spent a year in Washington, DC as a Revelle Fellow of the American Association for Advancement of Science (AAAS) to work on environmental and technology policy. Prior to his arrival in Dartmouth, Helble was a professor and chair of chemical engineering at the University of Connecticut.

Helble was named a Lehigh Trustee on July 1, 2020. He stepped down from his trustee position when he became a candidate early in the search process.

Helble has authored more than 100 publications and holds three US patents. In 2017 he was elected a Fellow of the AAAS. He is a co-recipient of the National Academy of Engineering’s 2014 Bernard M. Gordon Award for Innovation in Engineering and Technology Education for the design and implementation of Dartmouth’s Engineering Entrepreneurship Program, which includes the PhD Innovation Program. He received the CAREER Award from the National Science Foundation in 1998.

Helble’s wife, Rebecca Dabora, is the Chief Technology and Manufacturing Officer at Adagio Therapeutics, a biotechnology company developing world-class monoclonal antibodies that largely neutralize SARS-CoV-2, SARSCoV, and additional coronaviruses before emergence. Helble and Dabora will move to Bethlehem and live in the president’s house. They have three grown children.

Maria L. Chrin ’87 ’10P, Vice-Chair of the Board of Trustees, and Philip B. Sheibley ’81’ 19P, Vice-Chair of the Board of Trustees, served as co-chairs of the General Committee, which included the Board of Trustees. Employees, administrators, faculties as well as students and doctoral candidates. The committee asked the Lehigh community for feedback through six virtual town hall meetings at the beginning of the search process. These well-attended sessions gave faculties, staff, students, doctoral candidates, alumni and parents the opportunity to exchange their perspectives. The subsequent comprehensive global search attracted a diverse pool of outstanding candidates, from which Helble was ultimately selected.

“We are very grateful to everyone who shared their thoughts and insights during this extensive search process,” said Chrin. “The input we received was invaluable in evaluating the candidates and ultimately selecting Joe. We found in Joe the personal and professional qualities that we know will be critical to Lehigh’s future. “

Sheibley added, “We were looking for a strong and dynamic leader who understood the unique characteristics of Lehigh and could work with the Lehigh community to advance our university during a challenging time for higher education. We are confident that Joe is the right choice. He knows Lehigh, he loves Lehigh and he is a firm believer in what is possible at this university. ”

Helble said he looks forward to meeting and hearing from the Lehigh community, and most importantly, just getting started.

“I plan to spend time on campus, walking around South Bethlehem, talking to people, and most importantly, listening. I think this is one of the best ways to get to know a community better: understand why everyone who is there is there, learn what they value most in the community, just step back and listen and hear their stories. I also look forward to spending time with the alumni, hearing their stories and helping me better understand the impact Lehigh had on so many over many, many years, ”he said.

“I can’t wait to get started. I’ve been in Dartmouth for 16 years and never thought I’d go. But to have the opportunity as president to return to my alma mater, the university that changed my view of what is possible in life … I can’t even begin to describe how special this is to me. ”