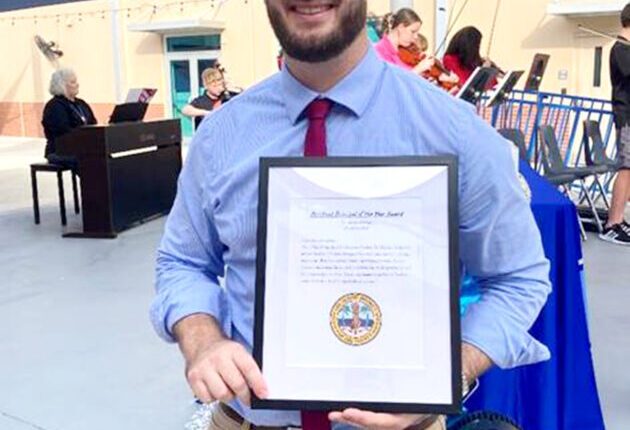 District staff and Ray V. Pottorf’s leadership team surprised Macchia with the award. She will go on to represent the School District of Lee County in the Florida Department of Education’s Principal of the Year competition.

“I know that my purpose is to serve and I choose to find other people who also believe that is their purpose and mission,” Macchia said after being presented her award. “They know my question always is, is it right for kids? And if the answer is it’s right for kids, then that’s what we’re doing.”

“Brandy’s school was a shelter before, during and after the Hurricane for our citizens with special needs,” said Lynn Herrell, Executive Director for Leadership and Professional Development. “She created a “family“Atmosphere for everyone in attendance. She never left even to take care of her own home and family.”

Macchia began her teaching career in Lee County in 1996. As an administrator she has served as a Turnaround Principal, Principal Lead, and Director of Elementary Curriculum and Instruction. She will be recognized by the School Board in January.

dr Restino began his career in Lee County as a Math Teacher in 2010. He was Assistant Principal at Lehigh Acres Middle School before transferring to Harns Marsh Middle in 2020.

“It’s great to be Assistant Principal of the year, but it’s more important to me to use this as a platform to celebrate the teachers and outstanding staff members in this building,” dr Restino said just after being surprised with his award, “This award is a validation of their hard work. They come to school every day, they mean every staff member and every student, ready to give their all.”

dr Restino is being recognized for his ability to collaborate with staff to create a school wide community of learners and his role as a mentor to new and aspiring assistant principals. He will represent the District in the state level competition and be recognized by the School Board in January.

“One of the things that I admire most about Dr. Restino, is that he believes that his job extends beyond the classroom and his work day never ends,” said Hams Marsh Middle School Principal Alex Dworzanski. “As a true servant leader, and lifelong learner, he has shown in more ways than one his contribution to the profession and the community as a whole. Community leaders and district leaders reach out to him to add value to their programs.”

Principal of the Year and Assistant Principal of the Year candidates were nominated by District leadership and submitted a resume and completed writing tasks to be considered. Cabinet and community members formed the selection committee that reviewed the resumes, writing tasks, nomination forms, and impact of nominees to select the award recipient.

A New Use for Dating Apps: Chasing STIs