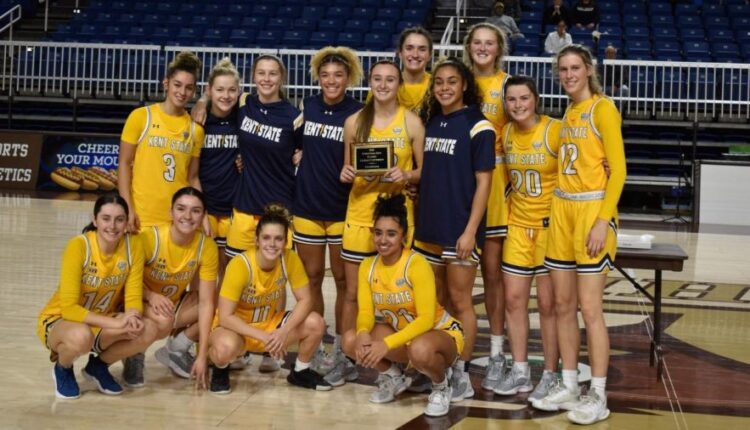 For the first time in 12 years, the Kent State women’s basketball team won its holiday tournament Sunday. The program defeated Quinnipiac and Southern Illinois in the Christmas City Classic at Bethlehem, Penn.

Graduate student Lindsey Thall was named tournament MVP after leading her team in scoring for both games. She led in 3-pointers Saturday with two and Sunday with four.

“That’s why she’s the MVP because she really carried us on our shoulders in a lot of ways,” Starkey said.

Thall, who is the program’s all-time 3-pointer leader, is tied for third in the Mid-American Conference in 3-pointers with 13 on the season.

Win 1, starting off down

Kent State went 5-for-12 from the field in the second quarter. Junior guard Casey Santoro’s jumper with 4 seconds left on the clock tied the game 24-24 by the half. Quinnipiac went 4-13 from the field and 0-4 from the 3-point range.

The Flashes had the lead from 9:00 in the third quarter until the end of the game. They shot their best behind the arc all day with 62.50%.

Quinnipiac and KSU both shot 11 points in the fourth quarter. Thall went 8-10 on free throws and led the team with 18 points.

Quinnipiac senior forward Cur’Tiera Haywood led the Bobcats with 13 points. Kent State went 16-49 from the field and 7-33 from 3PT range along with out rebounding Quinnipiac by two.

Win 2 with a shaky fourth quarter

Thall made 3-of-4 of her attempted 3-pointers in the first quarter.

With 1:36 left until halftime, Kent State took a nine-point lead to enter the locker room up 32-25.

The Flashes played their most dominant quarter in the third as they pulled away to go up 20 with 45 seconds left in the period. They were winning 49-29.

In the fourth quarter, Southern Illinois outscored KSU 32 to 23. The Salukis cut the deficit down to six with 2:32 left to go.

“It was such a team effort to finish it out against a really tough Southern Illinois team. It’s gonna continue to get better as the season goes on,” Starkey said.

Southern Illinois scored 20 points off turnovers and outscored the flashes in the paint by 12 points.

Finally back at home

The Flashes will be back in the MAC Center Sunday after two weeks of away games.

They play St. Bonaventure, which is 4-2, at 2 pm The Bonnies are on a three-game losing streak.

Their leading scorer is senior forward I’yanna Lops, who has totaled 71 points this season. Junior guard-forward Maddie Dziezgowski leads in 3-pointers with 12.

Kyle Kuchta is a reporter. Contact him at [email protected]