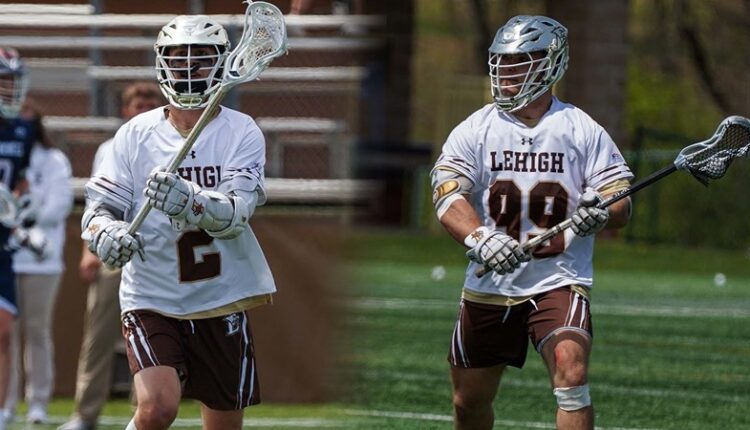 BETHLEHEM, PA. – A pair of Lehigh men’s lacrosse student athletes received the weekly Patriot League award on Monday when sophomore Christian Mule ‘was named League Offensive Player of the Week while Junior Mike Sisselberger was named Faceoff Specialist of the Week. The award is the first in Mule’s career, while it is Sisselberger’s fourth in a row and fifth this season.

Mule ‘ended Saturday’s 18-12 win against Bucknell with career highs in goals (7) and points (10). At the start of the weekend, only 10 players in the nation had scored double-digit points in a game that season. Mule ‘was just one goal and two points from setting program records. His 10 points were the most from a Lehigh player since Dan Taylor had 10 points with Furman on February 14, 2015. Mule ‘had seven points in the first half (four goals, three assists) and was involved in 70 percent of the Mountain Hawks’ first-half goals. Included was a highlight reel backhand scoop target that went viral on national lacrosse media. Mule ‘also scored a big goal 1.6 seconds ahead in the first half to put the Mountain Hawks 10-7 ahead at half time. For the season, Mule ‘has 27 goals and 13 assists. He has had at least four points in each of his last five games.

1️⃣0️⃣ points for Christian Mule ‘Saturday were the most of a Mountain Hawk since 2015 and earned him the @PatriotLeague Offensive Player of the Week ? pic.twitter.com/YSbpsWqeY2

The nation’s front runner in terms of pass percentage and groundballs starting over the weekend continued their strong game on Saturday. After winning six of his first eleven games, he won 15 of his last 16 to end day 21 of 27 with 15 groundballs. Sisselberger also recorded his first career support with 4:55 in the fourth quarter. For the season, he’s won 79.3 percent of his faceoffs (172 out of 217) with 127 ground balls. In nine games, his GB total is already second in program history for one season.

Make these 4️⃣ @PatriotLeague weekly awards for Mike Sisselberger after winning 15 of his last 16 on Saturday. pic.twitter.com/OTDP8eYhDr

With 9-0 in the season and 8-0 in the Patriot League, the Mountain Hawks are 5th in the national polls by Inside Lacrosse and US Lacrosse Magazine on Monday (and 6th in the USILA Coaches poll). Lehigh ends the regular season on Saturday with an out-of-league showdown at Villanova No. 16. The game time is set for 12 noon

Grand Canyon University is proud to announce Jamie Boggs as Vice President of Athletics. Boggs will be the first woman in Lopes history to hold the position and the third Asian American AD among 351 Division I programs. | News