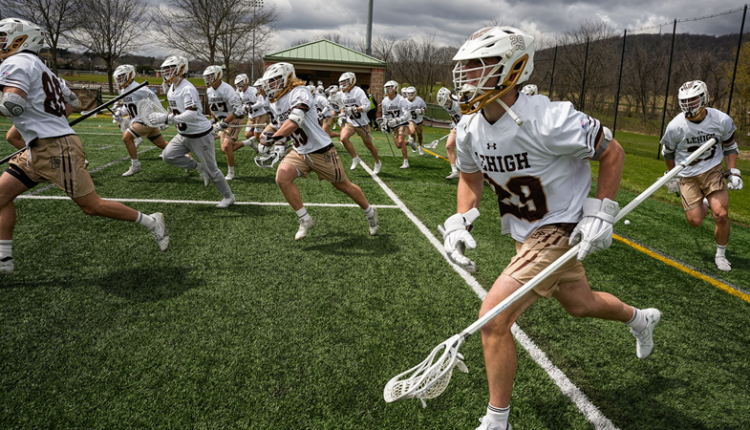 Lehigh Hosts No. 15 Boston University Saturday in Battle for First

BETHLEHEM, Pa. – The Lehigh men’s lacrosse team will look to bounce back from its first Patriot League defeat in three years when the Mountain Hawks return home for a huge showdown Saturday against Boston University on Senior Day. Opening faceoff is set for 3 pm on ESPN+ following the Lehigh women hosting Holy Cross at 11:30 am BU enters with a 6-0 Patriot League mark with the Mountain Hawks standing at 5-1. Both teams control their own destiny to earn the No. 1 seed in the Patriot League Tournament. The winner of Saturday’s game will enter its final game of the regular season (on Friday, Apr. 29) needing a win to clinch the top seed and right to host the league semifinals and championship game.

Prior to opening faceoff Saturday, the Mountain Hawks’ 12 seniors and two graduate students will be honored.

Last time out, a back-and-forth game at Colgate saw the Raiders lead 5-3 after one quarter before Lehigh held a 1-0 advantage in both the second and third. Colgate used a 3-0 run to end the first to take the lead, and the Mountain Hawks never retook it from there. They did pull even at five, seven and eight though. The eighth goal coming off the stick of sophomore Quinn Armstrong with 19 seconds remaining, just 20 seconds after Colgate took an 8-7 lead. But in the end, the Raiders wrapped up the victory at the 1:31 mark of overtime to snap Lehigh’s seven-game winning streak in the series. Colgate had been 2-8 entering the contest, but had come off a slim 7-6 defeat at No. 11 Harvard followed by a 13-11 loss at No. 14 Army.

Senior Tommy Schelling led the offense with three goals and two assists, good for his fourth straight five-point effort. In the process, he moved into 10th place in program history for career points with 155. One of Schelling’s assists was to classmate Cole Kirst in the first quarter, marking Kirst’s 50th-career goal. Armstrong scored two fourth-quarter goals while sophomore Scott Cole had a goal and assist. Senior James Spence was strong in making 12 saves, while classmate Mike Sisselberger won 13-of-19 faceoffs with 10 groundballs, winning 8-of-9 faceoffs after halftime. This came against Colgate’s Thomas Colucci, who had won 57.4 percent on the season coming in.

Despite the loss, the Mountain Hawks are still in a strong position for a high seed in the Patriot League Tournament with a successful final two games. With a win on Saturday (coupled with an Army win over Navy), Lehigh would clinch a top two seed and bye into the Patriot League Semifinals, while putting the Mountain Hawks in control for the No. 1 seed heading into the final game of the regular season. With a loss, Lehigh would be eliminated from any hopes of the top seed, but would still be alive for a bye (needing some out-of-town help).

Lehigh leads the all-time series with Boston University, 7-1, with the one loss coming in the Patriot League Quarterfinals at BU in 2017. The games have been extremely close, with the Mountain Hawks’ largest margin of victory coming by four goals . The teams first met in the Terriers’ first season of 2014, a 10-7 final. The last meeting was in the 2019 Patriot League Semifinals at Loyola, a 10-9 Mountain Hawks’ victory. Lehigh won in the regular season, 10-8.

Following Saturday’s game, the Mountain Hawks close out the regular season next Friday, Apr. 29 at Loyola. Gametime is set for 6 pm on CBS Sports Network.

US Rep. Gaetz’s Diagnosis of What’s Driving Insulin Costs Misses the Root Cause