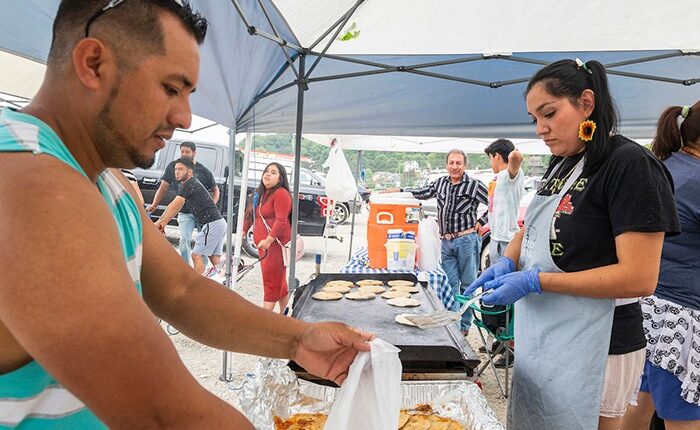 Ever Castillo just opened what he suspects is Pennsylvania’s first Honduran restaurant outside of Philadelphia.

His chosen location — Coraopolis — was until recently known mostly as a sleepy river town 10 miles northwest of Pittsburgh, hemmed in by water, trees, and steep hillsides.

But a burst of redevelopment has coincided with an influx of Latino residents, returning the town to something more resembling its early 20th century past, where incoming workers from Italy and the Balkans contributed to decades of vibrant growth.

Castillo has lived in the Pittsburgh area for the past eight years after first entering the U.S. from Honduras by way of Maryland, where he spent nearly two decades. He settled in Cranberry initially, but has since joined a growing number of Latinos making their home in Coraopolis.

Opening Five Stars Honduras Restaurant on the town’s main thoroughfare, he said, is an attempt to meet the new community’s growing need for services and amenities.

“That’s the reason we came up with the idea to open a restaurant, you know, ’cause everybody’s complaining because there’s nothing good,” said Castillo, who celebrated the restaurant’s grand opening on Aug. 6. “It’s just the normal [places] like McDonald’s and Burger King and all that. But everybody’s tired.”

Just two blocks down the same street, Luis Berumen and his brothers are preparing to expand their acclaimed Las Palmas brand with a new location combining a large grocery store with a dine-in eatery.

Having set the standard for authentic Mexican fare in the Pittsburgh food scene at their Beechview location, Berumen said the family is branching out to Coraopolis for a simple reason: “Lots of people are moving here.”

According to census data, the Latino population in Coraopolis leaped from around 100 residents in 2010 to nearly 350 in 2020, while across the county, the rate of growth has been far slower.

Nationwide, census records show the number of Latinos in the U.S. rose by nearly 12 million between 2010 and 2020, bringing the total population to 62 million by the end of the decade. This reflects a slightly slower pace than the preceding 10 years, where more than 15 million Latinos were added to the national population.

Most of those interviewed for this story initially settled in another state after leaving their homeland before arriving more recently in Coraopolis. Together, they represent multiple Central and South American nationalities.

According to the Allegheny County Latinx Needs Assessment 2021, a study commissioned by the county’s department of human services, just over half of foreign-born Latinos in Allegheny County originated from Mexico, while about a fourth came from Guatemala and 15 percent from El Salvador. Beyond these large groupings, the study shows that foreign-born Latinos in the county hail from all over the Spanish-speaking world.

“Many people come from Honduras, Mexico, Guatemala, and El Salvador,” said Veronica Martinez, a store manager at the La Poblanita Mexican grocery store in Coraopolis, where she has lived and worked for around two years.

While the store she works in brands itself as Mexican, Martinez is from Guatemala, and she said Latino customers of all nationalities see themselves as a united community in the borough.

Latinos are moving to Coraopolis, according to Jenny Diaz, a health promotion specialist at Beechview–based Latino immigrant resource center Casa San José, because they’re being drawn to the area’s access to dependable construction jobs, coupled with low living costs.

“The majority of the population choose Coraopolis due to the [better paying] jobs, and rent and living costs being lower than in the Pittsburgh area,” Diaz wrote in an email. “They go with the family choosing new job opportunities.” 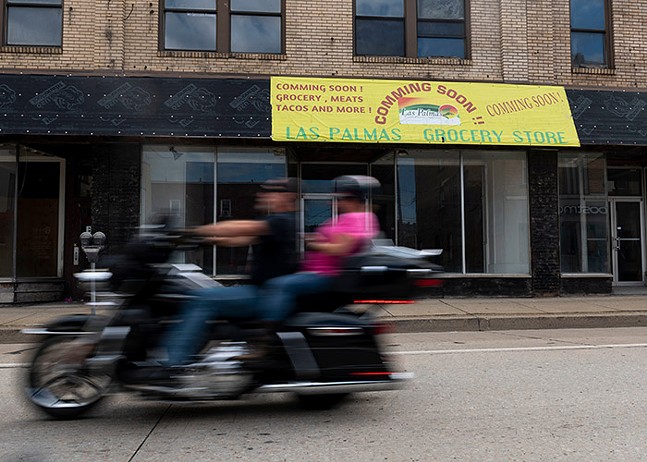 But, alongside these prospects, Latinos in Coraopolis still face challenges as they settle into a small, predominantly white, Rust Belt community.

At Casa San José, Diaz and her colleagues seek to meet these needs through a range of resources and programming offered by the nonprofit. They work with trusted landlords to refer new residents to good housing options, for example, and coordinate mobile health appointments through the Mooncrest Neighborhood Programs, a volunteer ministry promoting “spiritual, intellectual, physical, social, and emotional development for children and families.”

At the local Cornell School District, where Latino students are multiplying each year, Casa San José has partnered with educators to give additional support outside the classroom. 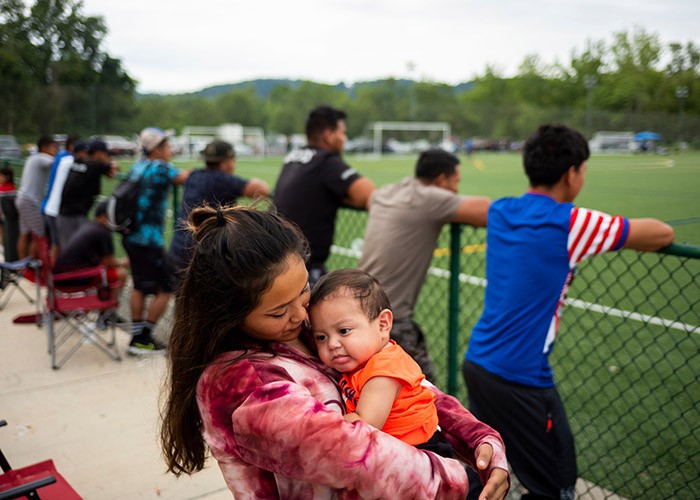 Superintendent Aaron Thomas said their work has been particularly important in helping teachers engage with families over their children’s needs and progress.

“They have been a great resource for us as far as communication with parents,” he added. 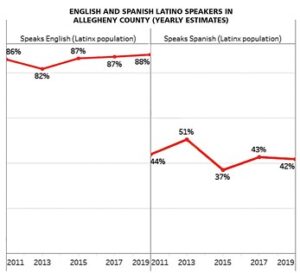 Just a few years ago, Thomas said, students speaking English as a second language made up around 2 percent of the student population. Now, they represent 11 percent, forcing quick adjustments for the district of less than 600 students.

“We’re trying to be proactive, but it’s also been a little bit reactive,” he said.

The district has now hired a full-time ESL teacher, after formerly relying on a part-time contractor, and is on the cusp of bringing in a second if the number of new students continues to climb. To ensure families can enroll their students without hitches, Thomas and his staff have experimented with an assortment of technologies and translation services.

Taking care of Cornell’s growing share of Latino students also means extending help, where needed, to the families who support them. Thomas said the district is currently finalizing a partnership with regional nonprofit Literacy Pittsburgh to provide adult language education to the Cornell community.

Amid the difficulties of transitioning to a new community and language, Thomas said Cornell’s small size and familiarity make the process easier. He believes this, and the welcoming environment they seek to foster, could explain in part why Latino families seem to be flocking to the district.

“If you come up here and enroll your child, you’re dealing with one person in one office,” he said.

Brenda and Vincent Sanchez, who live in the district, say their daughter has settled in well at Cornell and that she enjoys spending time with other students outside of school.

“She loves it,” Brenda Sanchez told Pittsburgh City Paper on a recent weekend.

Like many Latino families in Coraopolis, the Sanchezes often spend their Sundays immersed in up to 10 hours of back-to-back soccer games. Hosted in Coraopolis, the Liga Latina De Futbol, or the Latin Soccer League, has brought together regional teams each week for more than 10 years, making it an important cultural force in Pittsburgh’s Latino community. 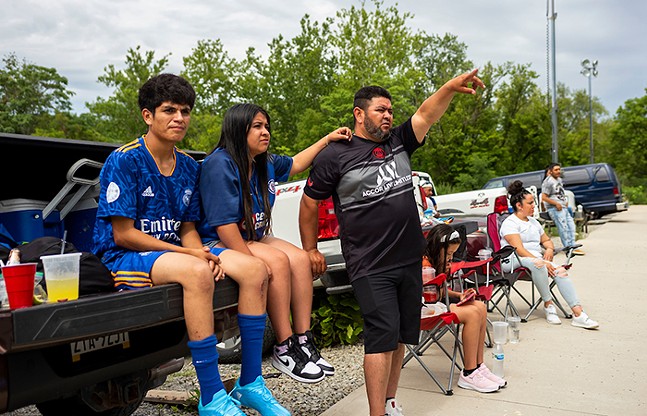 Every Sunday, each of the 10 teams takes on one opponent at the AHN Montour Health and Sports Medicine Center, a $16 million soccer and medical facility still under construction, where the Pittsburgh Riverhounds, the city’s professional soccer team, have trained since 2017.

Vincent Sanchez said the rhythms of working life for many Latinos converge around the Sunday league games, emphasizing their importance to community and social life.

“All the Hispanic people work a lot — like Monday to Saturday — so they need at least one day off for fun,” he said.

On a typical Sunday, passionate fans huddle around the sidelines of the outdoor turf field as wafts of grilled street foods swirl through the air. On and off the pitch, shouts echo, as players urge on their teammates and fans cheer for their teams.

“This is beautiful,” said Tony Martinez, a recent Pittsburgh transplant, pointing to the game unfolding beyond him and the rows of supporters on all sides. 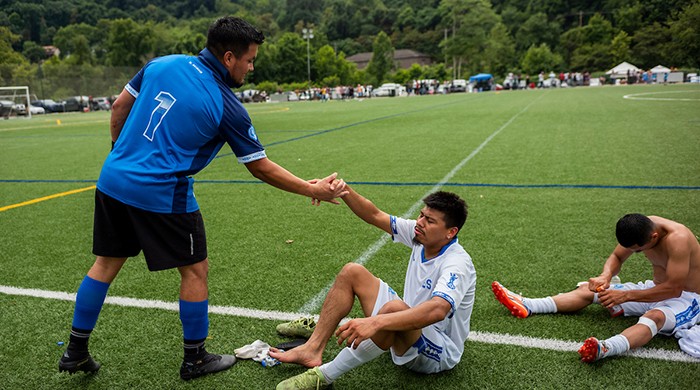 Martinez, 23, recently moved from Texas to be near family in Pittsburgh, and works primarily in a Downtown restaurant, where, he said, the pay is slightly better than what he was used to in Houston. Last week, he was at the league for the first time helping his aunt sell hot food from her traveling vending station, “Pupusas y Antojitos Helen.”

“This is like traditional food so they feel like they’re back home,” Martinez said, before confessing his favorite food is sushi.

Before COVID arrived in early 2020, Armando Campos, lead commissioner for the league, said as many as 20 teams took part every weekend. Participation dropped dramatically in the first months of pandemic, but it is now slowly rebuilding.

Campos said soccer is an important unifier across Latino cultures, and notes that league participants come not just from Latino backgrounds, but also include African natives and some non-Hispanic Americans.

In fact, supporters say the weekly league games sometimes draw hundreds of visitors from outside Coraopolis. Martinez said many of them stop in at her store on their way home to stock up on Latin American imports or to fill up on their offerings of flame grilled tacos stuffed with traditional Latino cuts such as tongue (lengua) or tripe (tripas). 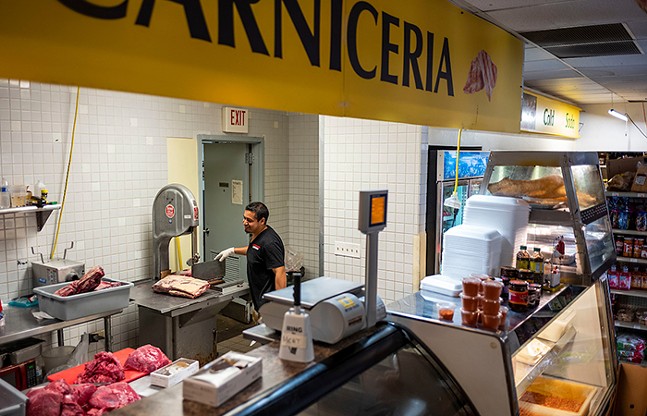 Meat is cut to be sold inside of La Poblanita Market in Coraopolis,Pa. (Pittsburgh City Paper photo by Nate Smallwood).

Up until now, Martinez said, her store has served as the community’s lone option for authentically sourced Latino products.

“Most people come here almost for everything,” she said, “because there is no other store like it or similar nearby.”

Berumen said he was persuaded to bring Las Palmas’ newest location to Coraopolis after hearing from Latinos that the growing community now requires more than just one grocery outlet.

Seeing the brothers behind the popular local Mexican grocery chain answer that call is a big deal to residents such as Brenda Sanchez, who remembers first arriving in the community when it housed only a small Latino presence.

“It’s going to be a better Coraopolis,” she said.