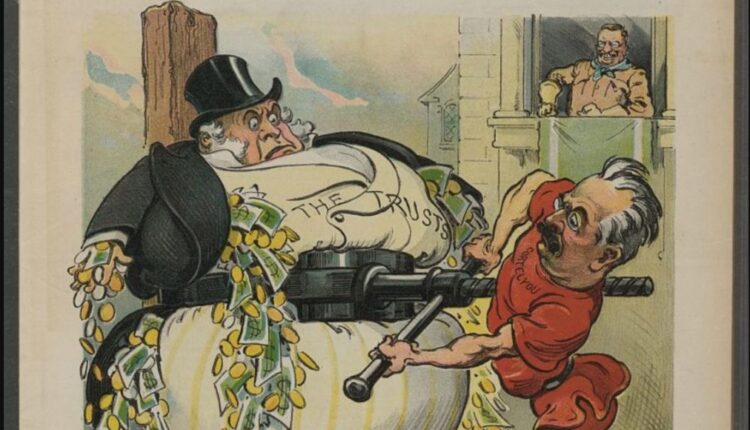 While billionaires get wealthier and corporate profits set new records, the rest of us are left with inflation, shortages, stagnant wages, hollowed out communities and a society increasingly driven by extremism and conspiracy. All of this is rooted in growing corporate monopoly power, which has left a small group of individuals and companies with the ability to dominate our lives. Yet too few policymakers talk about the urgent threat presented by concentrated corporate power.

To explore our current monopoly crisis and the structural changes needed to restore democratic control of the economy, we must reconnect with our long history of battling monopoly power. American’s previous triumphs over corporate power created a political tradition and a set of policy tools relevant to challenging monopoly domination today.

While the country’s founding is rooted in rejecting monopoly power, the development of railroads kicked off a more modern-looking era of big business.

Railroads were a remarkable technological feat, much like the internet, that transformed the economy and society. But this newly important and powerful industry, which was built using an array of government subsidies such as loans and lands grants, was quickly captured by corporate power. By the 1850s railroads had begun to consolidate and would quickly reach into different industries. For example, Minnesota’s James J. Hill bought out industrial firms and relocated their plants along the route of his Great Northern Railway. This consolidation generated rising rates and discriminatory pricing for farmers who were then hit with collapsing crop prices during the Panic of 1873.

You can imagine the problem for farmers: Low prices for commodities, even as the railroad that delivers your product to market can use its monopoly power to force you to pay whatever they demand.

That deep recession of 1873 generated a popular backlash that included rapid growth in a young organization we know today as the Grange. Founded in 1867 by Oliver H. Kelley of Minnesota, the organization — with the leadership of Minnesota populist Ignatius Donnelly — became a political force by the mid-1870s. They founded an Anti-Monopoly Party and successfully pushed for legislation in Minnesota, Iowa, Illinois and Wisconsin regulating rates and prohibiting price-fixing by grain and rail monopolists. Although the Supreme Court struck down these Granger Laws in 1886, policymakers had shown it was possible to challenge the grip of corporate power.

Railroads were among the first monopolists, but it was John D. Rockefeller’s Standard Oil that birthed the trust. In 1882, Rockefeller combined some 40 companies into the Standard Oil Trust, a complicated legal structure that solidified the company’s control over 90% of the oil industry, spawning copycats in other industries. In response, Iowa passed the first antitrust law in 1888, which laid the groundwork for passage of the Sherman Antitrust Act by Congress in 1890.

The Sherman Act, which remains the foundation of our antitrust laws, bans any contract or combination in restraint of trade and makes the monopolization or attempt to monopolize trade or commerce a felony.

The Supreme Court would initially limit the Sherman Act’s effectiveness, blocking an attempt in 1895 to prevent a merger that gave the American Sugar Refining Company 98% market share. This was just a year after the high court had ended a strike by Pullman Railroad workers, declaring a related boycott an illegal restraint of trade under the Sherman Act.

Like today, these warped interpretations of antitrust law unleashed a merger wave that consolidated 2,274 manufacturing firms into just 157 companies between 1895 and 1904. One of those mergers brought Minnesota’s Iron Range under the thumb of Wall Street’s James Pierpont Morgan. In 1901 Morgan created United States Steel, the first billion-dollar company, which included the Minnesota mines Rockefeller had taken hold of just years earlier. Morgan sought further monopoly power in Minnesota when he created the Northern Securities Company that combined railroads owned by Hill and fellow rail baron Edward H. Harriman.

That’s because in 1904 the Supreme Court ruled Northern Securities was an illegal monopoly in a case brought by the administration of President Theodore Roosevelt. The Sherman Act had finally prevailed in preventing corporate consolidation, sparking a new trust-busting era. In 1911 Standard Oil, the original trust, was broken into 34 separate successful firms, an early example of how breakups can spur growth and innovation.

In all, Roosevelt filed 45 antitrust lawsuits, while his successor William Howard Taft filed another 90. In 1911 Taft went after U.S. Steel, which created a rift between Taft and Roosevelt and set the stage for a critical campaign in 1912. That momentous election solidified a vision of economic democracy that would inform the New Deal and the golden age of antitrust enforcement that followed.

Justin Stofferahn lives in White Bear Township, Minn., and is a public affairs professional who has worked on a variety of tax and economic development issues and is a member of the Minnesota Main Street Alliance leadership team. He wrote this piece for the Minnesota Reformer, a sibling site of the , where it first appeared.

Social Media Posts Criticize the 988 Suicide Hotline for Calling Police. Here’s What You Need to Know.