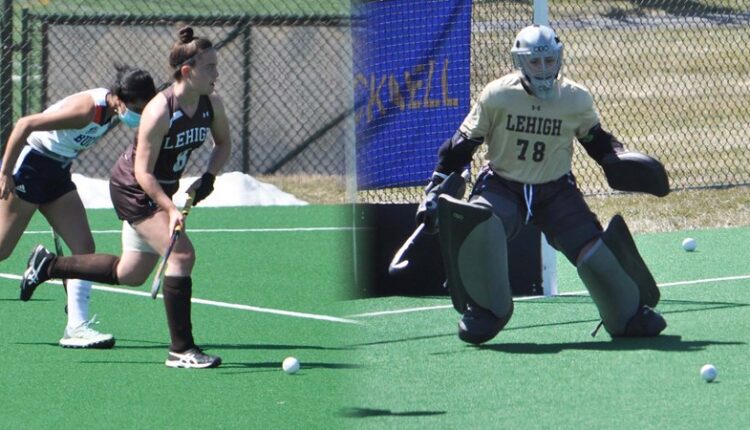 BETHLEHEM, Pennsylvania – As the Lehigh field hockey team continues to reach new heights on the field, the program continues to receive well-deserved recognition. On Tuesday Senior Lenke Havas and Maddie Kahn were named NFHCA All-Mideast Region (Havas first team and Kahn second team) in their second year. Havas becomes the first Mountain Hawk to be named the first team in the entire region since Christy Smith in 2007, and only the second first team in the entire region in program history. A season after Lehigh had multiple All-Region winners (Havas and Drew Pecora) for the first time in program history, it did so again in the spring of 2021.

The Mountain Hawks have now received five All-Region Honors (three Havas, Pecora and Kahn) awards in the past three seasons, following none of the previous six.

As a three-time All-Patriot League winner, Havas became the program’s first-ever four-time All-Patriot League winner (she was called up to the second team in the first year). Havas is a crucial factor across the field and has seen a lot of time in midfield and center-back this spring. Offensively, she scored three goals and six points, both tied for the team. Havas scored two goals in Lehigh’s 4-0 win over Bucknell, the biggest win against the Bison in program history. She also scored a big goal in the first half at Boston University’s No. 20. Havas made a defensive save against American and helped anchor a defense that has allowed the fewest goals (and the best margin) in the Patriot League game since 1996.

Kahn was named Goalkeeper of the Year in the Patriot League in four games this spring. She was also second in the country in parades per game (7.25). Kahn helped Lehigh on consecutive shutouts to open the season for the first time since 2000, when the Mountain Hawks defeated Lafayette and Bucknell for the first time since 2004 in the same season. Kahn followed these shutouts with eight parades against Holy Cross and 10 stops at American. One of those goals against the Eagles came on a penalty kick. Kahn has been voted Patriot League goalkeeper of the week twice. She scored 1.01 goals against average, a program record for a season while her percentage was good for fourth place in program history.

Lehigh started the spring with victories over Lafayette (1-0) and eventual Patriot League champion Bucknell (4-0), the first time since 2004 that the Mountain Hawks beat both the Leopards and the Bison. Despite defeats in the next three, Lehigh gave himself a chance against Holy Cross until the end, had the smallest advantage at American (2-0) since 2001, then gave himself a chance well into the second half in a nationwide despite being outnumbered ranked opponents.