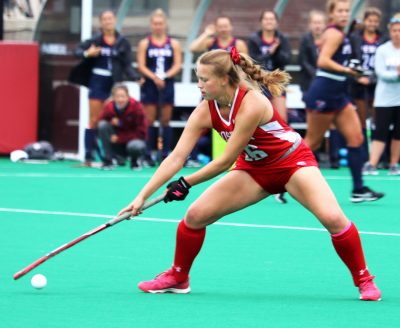 Lehigh (2-3) could have secured a place in the Patriot League tournament with a win, but the defeat ended the Mountain Hawks’ season.

Before the game, the six senior members of the team were honored with flowers, and head coach Sally Starr praised the team’s efforts during this difficult season.

“Lots [the players] I haven’t played for a month, “Starr said in a press conference on Sunday. “But I’m really so proud that we were able to score 4-0 and 12 points, 12 big points, which really gives us the opportunity to host a conference tournament now.”

The Mountain Hawks started the game offensively with senior midfielder Lenke Havas, but played on defense with senior substitute goalkeeper Stephanie Brabender. On the flip side, older BU defender Kathryn Scheerer excelled at both ends of the field, scoring her best third goal of the season on Sunday.

“It was a tough game today,” said Starr. “Lehigh fought really hard. We took the lead 2-0, they came back 2-2. And then I just loved that our team finished the game 5-2. I just had the feeling that we could do better in the second half. “

The Terriers’ senior strikers Liz Ryan and Scheerer found the net quickly, scoring two goals in less than three minutes at the start of the game. BU appeared to be able to dominate the rest of the quarter, but the Mountain Hawks bounced back after a quick-reacting goal from Havas, their third goal of the season that cut their lead in half.

The momentum slowly shifted to Lehigh, who found his step into the second quarter – Lehigh’s new midfielder Julia Gatelein finally scored and connected the game 2-2 at halftime.

“You’ve really hit our press,” said Starr. “We allowed way too many holes, a numerical disadvantage in the midfield that we had to solve. In all honesty, our hotline defense of coming back and covering the dangerous lanes wasn’t as good as it had to be and I think that has a lot to do with not playing [for three weeks]. ”

The second half started softer, but BU was able to make the adjustments to break Lehigh’s defense later in the third quarter. Terriers newcomer striker Tess Csejka and second striker Ellie McIntyre scored two goals – the latter after a successful diversion up front – and built another two-goal lead.

BU would score a fifth goal in the final minutes of the game, Ryan’s second of the day – a win for the Terriers and their chance to play at home in the Patriot League tournament semi-finals.

“We’ll do a lot better next Thursday,” said Starr. “[College of the] Holy Cross is very good this year. I will be curious to see who wins this game between Colgate and Holy Cross. Both teams have improved a lot. “