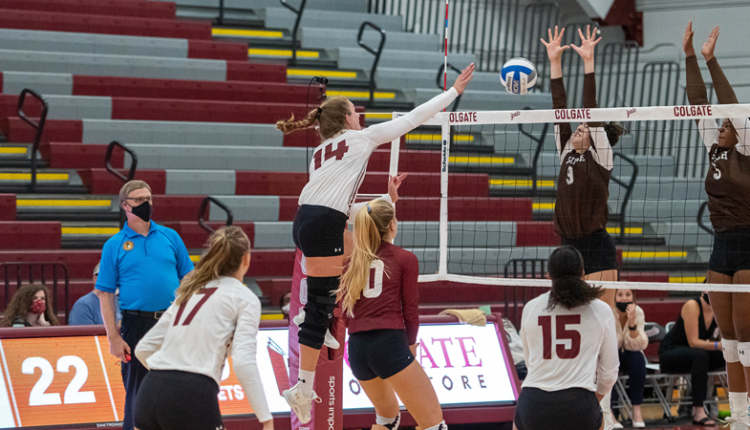 HAMILTON, NY – The Lehigh volleyball team showed off the full life Friday night, but it just wasn’t enough to outrun a hard-hitting team in Colgate when the Mountain Hawks in straight sets (19-25, 21-25, 22nd) fell -25) in Cotterell Court at the start of the Patriot League for the 2021 season. Lehigh was offensively led by fifth graders Sabrina Lancaster and Hannah Wright with 12 kills and 10 respectively, but fell to 3-8 overall at the start of the year.

Lehigh kept things tight in the first set, but trailing 8-7, the Raiders went five straight times, leading 13-7. Being able to cut it down to four, Colgate held onto for the 25:19 win.

Lancaster caught fire with three consecutive kills midway through the second set to put the Mountain Hawks 16-14 ahead, but the Raiders found a way to regain the lead after Ashley Chow removed four points in a row on a service run ahead , 23-19. Kills from Harper Snyder and Alli Lowe took Lehigh away in the second, 25-21.

The Mountain Hawks opened the third set with a 2-0 lead after consecutive kills by Wright. With a 5-4 lead at the start, Lehigh took four of the next five points to move forward by three with 9-6. The momentum shifted back to the Raiders, who took an 11-10 lead after a 5-1 run.

Lehigh was leading 16-15 but that was all she wrote when Colgate quit the job leading the rest of the way and winning it 25:22 to finish the game.

The loss to Colgate marks the eighth episode of Lehigh, dating back to September 22, 2017. The Mountain Hawks hadn’t won at Hamilton since the 2015 season.

With Lancaster and Wright at the top of the kills, newcomer Emily Stewart also added eight, while newbie Megan Schulte coped with six. Freshman Makena Smith had 23 assists with eight digs while Ally Thaw registered 12 digs to lead the team.

On Colgate’s side, two-time Patriot League Player of the Year Alli Lowe dominated with 20 kills. Julia Kurowski had 30 assists with eight excavations and Caroline Altergott completed 12 excavations with the team best.

The Mountain Hawks will now travel three hours south to West Point and face the defending Patriot League Champion Army on Saturday at 7 p.m. The Black Knights swept Bucknell Friday at Gillis Field House. Live stats will be provided for the final Mountain Hawks matchup over the weekend.