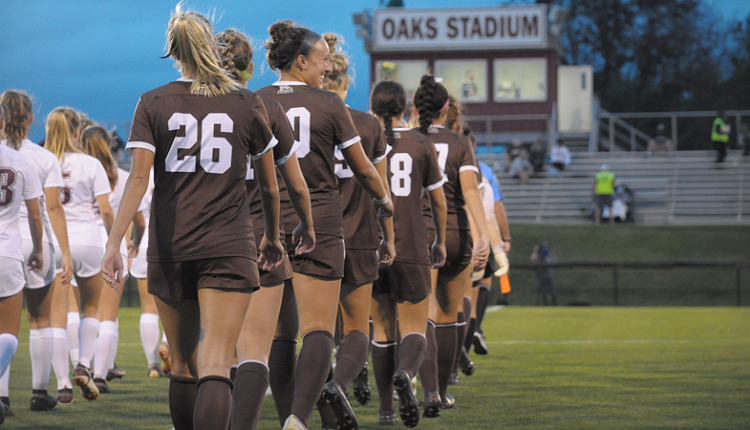 BETHLEHEM, Pa. – The Lehigh women’s soccer team is set to open its 2022 season, and the Lehigh Athletics calendar, when the Mountain Hawks host Monmouth on Friday. Opening kickoff is 7 pm on ESPN+. Friday will mark the seventh straight fall season that Lehigh and Monmouth will meet.

The games between the two teams have historically been very competitive, with Lehigh going 1-1-4 over the last six vs Monmouth. The 2022 Mountain Hawks are coming off a Patriot League Tournament appearance last season. Lauren Calabrese, a 2007 Lehigh alum, enters her seventh season back at Lehigh and first as head coach.

The Mountain Hawks will feature plenty of returning talent from the 2021 squad, including their top two scorers and four of the top five. In total, four of the Mountain Hawks’ five All-League honorees from last season also return. Erin Keefe returns in the back as a graduate student, serving as a strong spark and anchor. Other returning All-League honorees are senior Ryelle Shuey, junior Ava Schaller and sophomore Corinne Lyght.

Monmouth finished last season 15-5-1 and 8-1-1 in the MAAC, winning the conference regular season and postseason tournament. The Hawks faced Penn State in the NCAA Tournament. Monmouth enters its first season in the CAA, as Lauren Karabin and Jesi Rossman were both named to the preseason All-Conference team, after being named second team All-MAAC last year. Karabin finished 2021 with 10 goals and four assists for 24 points, while Rossman had five goals and a team-best nine assists. As a team, Monmouth was picked to finish fourth in the CAA preseason coaches poll.

Monmouth leads the all-time series with Lehigh, 10-4-5, beating the Mountain Hawks by a 1-0 final last year with a goal in the 81st minute. The goal was the first for Monmouth against the Mountain Hawks since 2015 (spanning 530:35 of game action in the all-time series). Lehigh nearly pulled even, posting three shots and two corner kicks in the final 1:24, but Monmouth’s defense held strong. The last times they met at Lehigh, the teams played to a scoreless draw. The last three meetings ended in a tie.

After Friday’s game, the Mountain Hawks return to the field next Thursday when they host Drexel at 7 pm on ESPN+.

North Attleboro ranked as one of ‘America’s Hottest Zip Codes of 2022’ according to Realtor.com