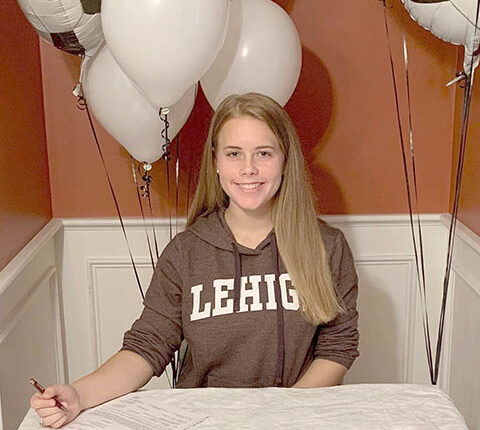 Senior goalie Abby Trainor was recently the seventh Smithfield soccer player since 2012 to sign a national letter of intent for a DI program when she wrote her NLI at Lehigh University, which plays in the Patriot League and is located in Bethlehem, Penn.

Since 2012, Goalie has been the seventh Sentinels player to join the DI ranks

SMITHFIELD – Make no mistake about it: Abby Trainor loves Smithfield and she won’t hesitate to tell you that because of her hometown, she “became who she is”.

And that could explain why the senior Smithfield High goalkeeper, who recently helped her team make it to the semi-finals for the fourth time in the past six seasons, decided to sign a national memorandum of understanding to support her athletic and academic career in the Lehigh University to continue. which plays in the Patriot League and is embedded in the small town of Bethlehem, Penn.

Trainor, who joined the DI Mountain Hawks 13 months ago, tried to choose between Lehigh and the U.S. Naval Academy in Annapolis, Md., Last year, and while enjoying a visit to Maryland to attend the academy, if she traveled to Lehigh she just blew her away.

“It’s almost like a little New England school even though it’s in Pennsylvania,” remarked Trainor. “It’s a beautiful campus on a hill. The city of New Bethlehem is beautiful, and when I walked into Goodman Stadium it was the most beautiful lawn I have ever seen. ”

Not only is Lehigh “not too far from home but just far enough to have my own piece of freedom,” joked Trainor, but the university’s College of Business appealed to her too. Trainor, who has a rigorous course load at Smithfield High Academy of Finance, wants a major in business and a minor in English.

She is also the first goalkeeper to sign an NLI with a DI program since Pike, who is currently the assistant coach of the SHS girls’ soccer team.

Trainor, who took a few minutes last Saturday morning to discuss her decision to visit Lehigh, praised and thanked the coaches for the many stops they have made at Smithfield Youth since her career began more than a decade ago Soccer had undertaken association.

She was also grateful to her teachers at Gallagher Middle School and Smithfield High, and most importantly, took pride in calling herself a Smithfield Native.

“It really started in Smithfield for me,” she said, “not just in terms of football, but because of that town, I became who I am. My love for business, English and soccer started here. It all started with Lionel Delos and Anthony Bettencourt (RI Strikers FC coaches). It started with (Smithfield High Teacher) Adam Spring for Law. This city is really important to me and that’s why I go where I go. “

Though Trainor played for a handful of clubs in middle school, she was also on target for Gallagher, who reached the RIPCOA State Finals and 16 semi-finals in 2015. In 2003 she was selected twice for the US Youth Soccer ODP (Olympic Development Program). national warehouse in Phoenix, Ariz.

“I was in 7th or 8th grade and college coaches were watching us,” she added. “It was very intimidating.”

“I had some of my favorite memories playing for NEFC,” she admitted. “However, I had to sacrifice a lot to play for the prosecutor. I was a two-sport athlete and I had to stop playing softball because I ran out of time. I had to spend all of my time focusing on football. “

“But I have to travel and play with and against some great players,” she added. “Having this opportunity was incredible. I had to give up so much but I think it really paid off. “

After getting involved with Lehigh, Trainor decided to spend her senior year with the Sentinels and get the last chance to play on the field with her hometown friends. When the COVID-19 pandemic wiped out the high school season last spring, Trainor feared it would wipe out the fall season too, but the Sentinels were able to play in eleven games and end their season with a 6-4-1 mark.

“I always wanted to play for my high school and I always wanted to play my senior year,” she added. “There’s nothing like playing high school soccer, and I know it now because I was lucky enough to play this season. Just being with my teammates was what I was looking for and it really marked my year because these were obviously unprecedented times. I didn’t get a junior prom; We are unlikely to have a senior prom and many of our senior privileges have been taken away. “

The Sentinels’ season ended last Thursday night in Warwick when they dropped a 3-0 decision against Pilgrim High in the semifinals. Before that game, the Sentinels went 4-1-1 in their last six games, allowing only three goals during that time.

The fourth win was a big, 3-0 quarterfinal win over Cumberland High on Tuesday November 17th at Clippers’ Tucker Field. Looking to return to the state finals with a seasoned lineup, the Clippers had only scored three goals in a game in the last two seasons, but the Sentinels took Marissa Ruzzano and Bella Francis 1-0 ahead in the first half after a free kick and Ruzzano extended that lead in the last 17 minutes of the second half.

“We played with so much heart,” said Trainor, who stopped six shots to post her fourth shutout of the season. “The end result was misleading because it was 1-0 for 60 minutes and then we scored two fantastic goals.”