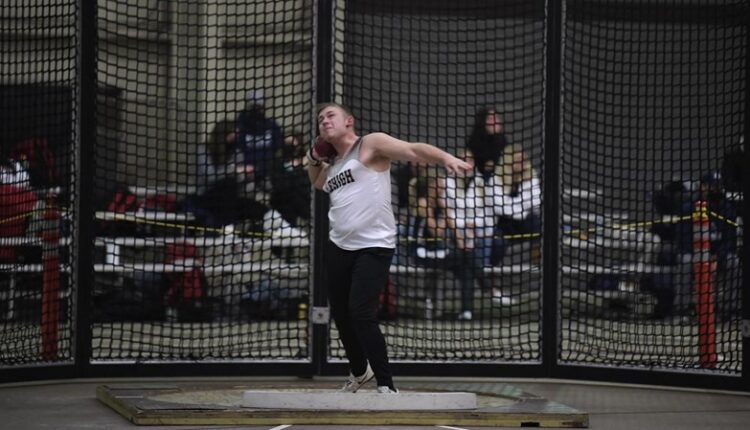 BETHLEHEM, Pa. — Competing in its second competition of the season, the Lehigh men’s track and field team hosted the annual Angry Birds Challenge at Rauch Fieldhouse on Saturday. The Mountain Hawks finished with 119.5 points behind Monmouth and Binghamton, who finished first and second respectively.

“Every team is struggling with COVID,” said assistant coach Brooke Astor. “Each team will be competing in the same championship at the end of the season, so we have to adapt. It’s all about who shows up and who adapts best.”

“In the 5K we had our experienced guys. Seth won and Avery and Nick got off to a great start so we’re going to line those guys up for the rest of the year and the longer events,” said assistant coach Todd Etters. “We’re in a good position, we need to keep working hard and keep improving, but it’s nice to see they’re in a good competitive position and the times will come down as we move forward.”

The Mountain Hawks were able to gain experience and success with the throws on Saturday. First-grader Liam Lovering set a new personal best by finishing fourth in the shot put (14.43m). Junior Quinn Conlan scored points for Lehigh in the weight throw, where he finished third with a personal record of 15.07 m.

“Liam Lovering’s performance was probably the highlight of the day for the men’s team. That’s a huge PR for him and a great mark for a first year starting the season,” said assistant coach Allison Taub. “When it comes to the weight throw, Quinn finished third with a tremendous PR to end his season and Achilles finished sixth and connected his PR. He’s starting to become consistent over the 14 meter mark.”

“A great sprint day for everyone who was there,” said assistant trainer Khayla Atte. “We’ve been dealing with health and safety protocols and family stuff and injuries over the holidays so I’d say for who we had it’s been solid.”

Lehigh was third overall with 119.5 points. Monmouth led with 185.5 points, followed by Binghamton with 134 and Sacred Heart in fourth place with 77.

Some of the Mountain Hawks will return to Rauch Fieldhouse for the Moravian-hosted John Covert Classic on January 22, while others will travel to the Villanova Open in Staten Island, NY