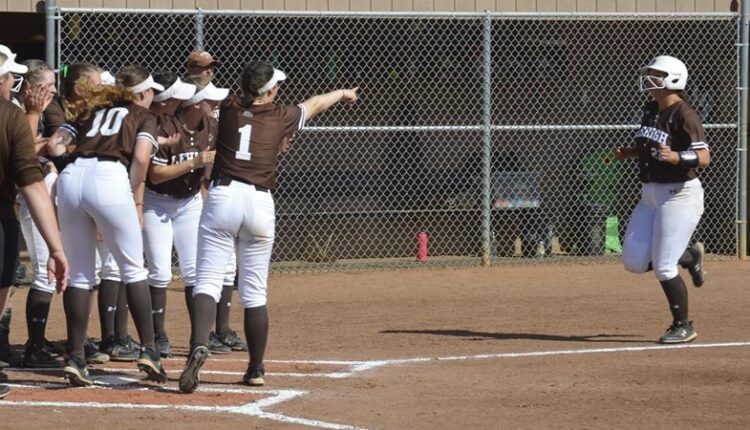 Lehigh Eliminates Colgate to Earn Championship Round Rematch With Boston U.

BOSTON – For the fifth consecutive Patriot League Tournament Lehigh has advanced to the championship round. The Mountain Hawks rebounded from a 1-0 loss to host and top seed Boston University in their first game Friday to eliminate Colgate 5-1 at BU Softball Field.

Lehigh (28-18-1) will meet Boston University Saturday in the championship round for the fifth consecutive tournament, needing two wins to capture its first tournament title since 2017.

Senior Jaelynn Chesson went 3-for-4 in the elimination-game win over Colgate and jump-started the Mountain Hawks with a two-run home run to left center in the top of the first. Chesson’s home run was her 13th of the season, tying her with Lisa Sweeney (2008) and Jen Colquhoun (2012) for Lehigh’s single-season record.

A record-tying two-run J-💣 puts us in front!

Chesson goes deep to left center for her 13th of the season.

Sophomore Katelyn Young delivered another strong start in the circle, allowing one run on just three hits with one walk and one strikeout. Colgate’s only run came on a Steph Jacoby RBI double in the bottom of the first inning.

Chesson had three of Lehigh’s 10 hits off of Colgate pitchers Bailey Misken and Kaitlyn Borruso.

Senior Jaelynn Chesson went 3-for-4 with her school record-tying 13th home run in the win over Colgate. pic.twitter.com/RhmLUra0St

Lehigh’s best scoring opportunity came in the top of the second when the Mountain Hawks put the first two batters on. A sacrifice bunt moved the runners into scoring position, but first-year Lindsey Martin was ruled out at the plate on a ground ball to shortstop and the Mountain Hawks were turned aside.

Nori got out of the first inning with a double play started by senior Carley Barjaktarovich. She then stranded two runners in the second by striking out AJ Huerta-Leipner looking.

Boston University (40-15) scored the only run of the game in the third when Kayla Roncin singled home Audrey Sellers with two outs.

Sophomore Brooke Cannon singled through the left side in the fourth for Lehigh’s lone hit of the game.

Nori started a 1-6-3 double play to end the sixth inning and finished with a line of one run allowed on five hits with one walk and four strikeouts.

Boaz walked two and struck out two to earn the win for Boston University.

Saturday’s championship round begins at noon and will be broadcast on ESPN+. The Terriers need to win just one game while the Mountain Hawks need to win two. The if-necessary seventh game will begin 30 minutes following the conclusion of game one.

🥎 @Lehighsoftball wins 5-1 over Colgate. Rory Dudley talked about the team’s mindset heading into their second game of the day. pic.twitter.com/1NkRNymgE0