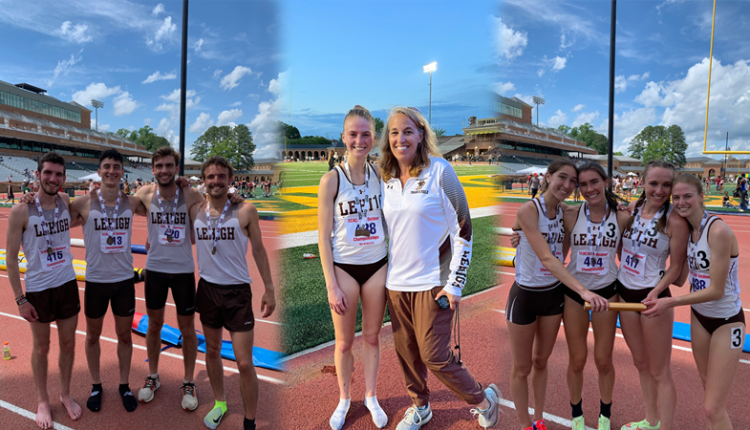 WILLIAMSBURG, Va. – The Lehigh men’s and women’s track and field teams wrapped up competition on Sunday at the IC4A/ECAC Championship, hosted by William and Mary. The Mountain Hawks had a solid weekend in Williamsburg, Va. with sophomore Christina Yakaboski winning the 5k and both the men’s and women’s 4×800 relay teams winning their races. The Mountain Hawks finished the weekend with six individuals and four relay teams earning All-East honors by finishing in the top eight.

Yakaboski was the first Mountain Hawk to win a gold medal this weekend. On Saturday, she won the 5k with a new personal best of 16:47.04 to become third all-time. Junior Madison Zaun ran alongside Yakaboski, finishing 17th with a time of 17:42.23. The 4×800 relay teams wrapped up the three-day competition on Sunday for Lehigh, bringing home gold medals and All-East honors.

“That was pleasantly surprising,” said head coach Matt Utesch. “We knew she had that time in her but she speeded brilliantly. She sat on Autumn Sands from Lafayette for quite awhile and just opened up and dropped the hammer on her which was really inspiring to watch.”

Senior Kyle Burke and juniors Jacob Martinez, Brandtson Duffie, and Kerem Ayhan have had their eyes on the 4×800 school record all season. On Sunday, the four Mountain Hawks finally broke the 45 year old school record, winning the race with a time of 7:26.80.

“We knew we had the guys sort of in the stable to do it but it took the right day and the right time and they did it quite easily,” Utesch said. “As a matter of fact I think one of the guys said that when Kyle got the baton all he had to do was run a 1:58 and they still would have broken the record so everybody did their part on that and that was a really Awesome effort. Kudos to the guys that set that record 45 years ago too. That’s an awesome, iconic record for us to break.”

The women’s 4×800 followed suit, winning gold medals of their own on Sunday. Seniors Kara Bonner and Natalie Condon as well as junior Elena Perez-Segnini and Yakaboski finished with a time of 8:57.66 to be named ECAC Champions.

“Back to back wins which was pretty neat to see from the stadium and watch that happen, both relays just came in and kind of dominated and it was pretty neat to watch,” said Utesch. “I think it really bodes well for the women and for their future because there were some folks on that relay that don’t normally run it. For example Christina Yakaboski ran a 5k the night before and turned around and ran the 4×800 the next day , that’s not a normal double and she ran a pretty good split too.”

While Lehigh had impressive performances on the track, senior Teasha McKoy stepped up in the field, finishing in the top eight in two events. McKoy broke her third school record of the year in the shot put on Friday. She finished seventh with a mark of 14.12m. In the discus, the senior finished fourth overall with a mark of 46.37m to be named All-East.

“It’s hard to talk about Teasha without getting emotional because she’s been the backbone of the throws group for the last four years,” Utesch said. “She’s been through a couple of different coaches and she absolutely deserves the school record. I know she’s a little disappointed because she wanted to break it a little more significantly and I know she wanted to move on to the second round as well but she has been a pillar of our program and I can’t thank her enough for all of her leadership and help throughout the years. She’s really been quite amazing.”

Sophomore Achilles Mouzakis opened up competition on Friday in the hammer throw. He was the first Mountain Hawk to earn All-East honors, finishing eighth with a mark of 52.35m.

On Saturday, Lehigh finished the day with five top eight finishes and five PRs. Senior Hetty McMillan was the first Mountain Hawk to earn a new personal best. McMillan was just short of All-East honors as she finished ninth in the 1500m with a time of 4:29.92.

Fellow senior Jade Sessions had an impressive race in their final meet of the season. Sessions finished fourth in the 800m with a new personal record of 2:08.80 to earn All-East recognition. She is now third all-time.

On the men’s side, graduate student Seth Slavin competed in the 10k for the men’s team on Saturday. Slavin finished eighth with a time of 31:25.39 to become All-East in his final meet at Lehigh.

Both Ayhan and Martinez competed in the 800m on Saturday for Lehigh. The duo were just short of All-East honors, finishing with respective times of 1:52.56 and 1:52.58.

Lehigh’s sprinters continued to put up solid times as they wrapped up their season this weekend. The 4×100 relay started things off on Saturday, finishing seventh with a time of 47.79. Senior Camari Griffin, junior Ashley Griesmeyer, sophomore Jordyn Hock and first-year Stephanie Webb all earned All-East honors in their seventh-place finish.

In the final race of the weekend, Griffin, Hock, McMillan and Webb competed in the 4×400 relay where they earned All-East recognition. The relay team finished seventh overall with a time of 3:54.41.

Conroy was just short of being named All-East in her ninth-place finish in the pole vault (3.68m). Talamini-Kelemen competed in the triple jump alongside junior Rachel Sequeira. Talamini Kelemen finished 15th overall with a mark of 11.43m while Sequeira finished 17th with a mark of 11.15m. The junior also competed in the long jump where she earned a 16th place finish with her mark of 5.20m.

For some Mountain Hawks the IC4A/ECAC marks the end of the outdoor season. Several Lehigh student-athletes will wait to see the final qualifying lists for the first round of the NCAA Championships. NCAA qualifiers will be announced early this week.

What Americans are saying about their financial health | The Numbers Racket