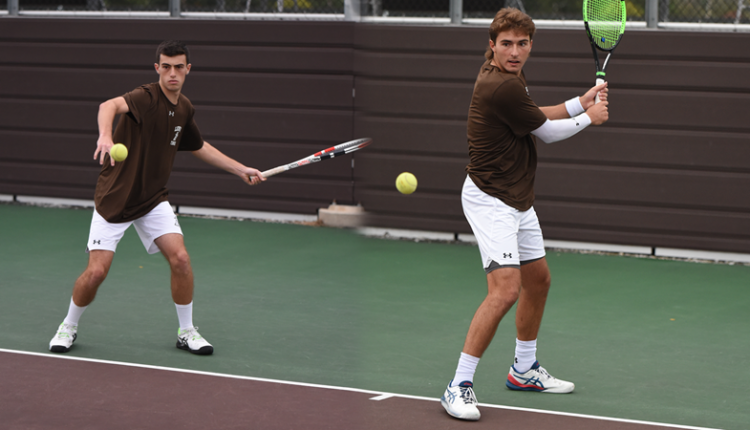 “Marc Blekhman is the first ever Lehigh Men’s Tennis player in Patriot League history to win Rookie of the Year,” said head coach Wouter Hendrix. “This is an incredible accomplishment and I am very proud of him. Marc has worked incredibly hard for this award and I love the way he competes. He played a big role in our team’s quest for the number two seed. This special recognition is a reflection of our entire team’s commitment to our vision.”

In his first-year at Lehigh, Blekhman had a stellar season for the Mountain Hawks to secure his Rookie of the Year and second team All-Patriot League honors. He finished with eight singles wins, four of which were earned in league play. The first-year put up impressive numbers in doubles, finishing the season with a team-high 13 doubles wins. Paired with junior Jeremy Learner during league play, the duo went undefeated in doubles, finishing 6-0 for the season.

Elliott was named first team all league for the second time in his career. The senior also earned the honor after his junior season and was named second team after his first year at Lehigh. The senior ended his Lehigh career with his best season yet. Competing at the No. 1 spot, Elliott finished the season with a team and career-high 13 singles wins. During league play, he went undefeated, finishing a perfect 6-0. Elliott finished his Lehigh career with a 34-19 record in singles and 32-24 record in doubles.

“Zack’s undefeated league record at the number one position speaks for itself,” said coach Hendrix. “He’s had an absolutely magnificent season. One can only marvel at the long and remarkable list of opponents he has bested this year. Zack’s combination of talent, work ethic, and leadership intangibles have been a crucial factor in cementing our team’s status as a top 3 squad in the Patriot League for the past four years. I consider myself very lucky to have had the privilege of coaching him.”

The Mountain Hawks defeated Loyola Maryland in the Patriot League Quarterfinals this year. Lehigh’s season ended in the semifinals against Army. The men’s tennis team finished with a 13-7 record and 7-1 record in league play.