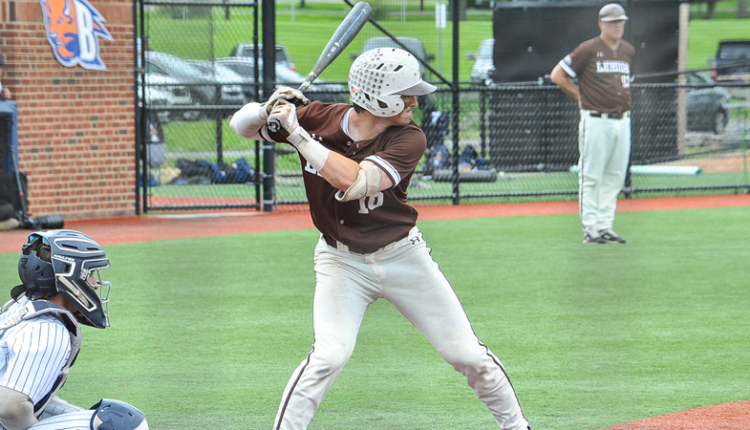 LEWISBURG, Pa. – An offense-centric opening game of the Patriot League semifinal series which was played on both ends of a 50-minute lightning delay resulting in a 10-8 victory for Bucknell Saturday afternoon. Game 2, played between the Mountain Hawks and Bison, will take place at 11 am on Sunday morning while Game 3 (played if necessary) will begin shortly afterwards.

The Mountain Hawks (26-23) managed to score eight runs on 10 hits, jetting out to an early lead before re-taking it twice in the fifth and sixth innings before falling.

Lehigh’s first eight in the starting lineup each managed to collect a base hit with both Adam Retzbach and Tyler Young having two-hit games. Casey Rother and Andrew Nole each finished with two RBIs, totaling four of the Mountain Hawks’ eight runs.

On the mound, sophomore right-hander Tyler Thompson (1-2) was charged with the loss after allowing two earned runs on two hits in 0.2 innings. Rother ended up giving up the home run that put insurance runs on the board for Bucknell which led to the victory.

Lehigh scored first in the second inning on Nole’s groundout which scored Young to take a 1-0 lead. The advantage became 2-0 on Joe Gorla’s RBI single to left field in the third inning.

Bucknell tied the game with two runs in the fourth inning before the Mountain Hawks got back on top in the fifth inning off Retzbach’s RBI single to left field, scoring Jake Whitlinger to make it 3-2.

In the bottom of the fifth, the Bison scored three runs, starting with a two-run triple down the right field line and was followed by Logan Kellerman’s sacrifice fly to center field which was caught by a sprawled-out Whitlinger. Bucknell headed into the sixth inning with a 5-3 lead.

The Mountain Hawks got their big inning in the top of the sixth inning, fighting back from down two to go up two by scoring four runs. Riley Davis laced a double to right center field to score Young and Nole singled through the right side, scoring Davis to tie the game at 5-5.

A two-run single off the bat of Rother extended the Lehigh lead back out to 7-5. Rother, who finished the game 1-for-3 with two walks and two RBIs, extended his hitting streak to 19 straight games, matching the Mountain Hawks’ longest hitting streak since 2014.

With two outs in the bottom of the sixth, Brendan Lowery ended up doubling down the left field line against Nick Pave, scoring two to tie the game at 7-7.

Bucknell took an 8-7 lead in the bottom of the seventh inning which led into the 50-minute weather delay for lightning in the area. The game resumed around 4:45 pm and the very next batter, Chris Cannizzaro, launched a two-run home run to left field to take a 10-7 lead.

Lehigh scored his final run of the game on a throwing error in the eighth inning, but the Bison held on for the 10-8 win.

The Mountain Hawks will need to win two games on Sunday at Depew Field to keep their season alive and advance to the Patriot League Championship Series. Both games will be streamed live on ESPN+ (subscription required).