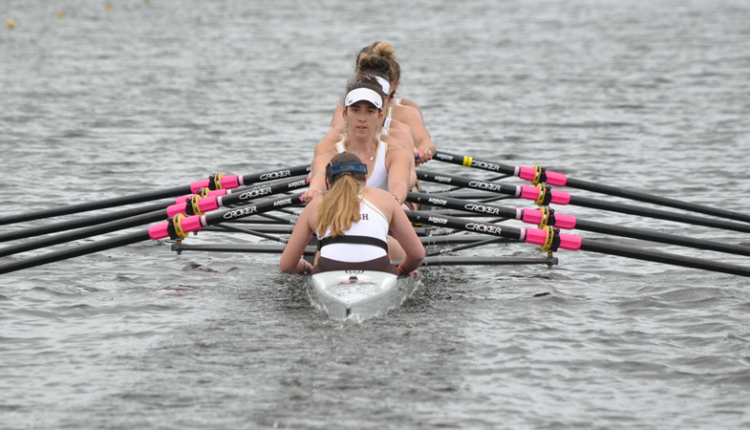 CHERRY HILL, NJ – The Lehigh rowing team continued to raise the bar at the Patriot League Championships, as the Mountain Hawks finished fifth overall, led by a fourth-place finish from the Varsity Eight on Friday on the Cooper River in Cherry Hill, NJ That V8 performance tied for the best finish in program history and best with nine crews participating. Last season, Lehigh’s Varsity Eight was also fourth out of seven crews competing.

“Two out of the three boats outperformed their seedings and the other one met their seeding,” said Lehigh head coach Brian Conley. “When you walk away and the whole team outperforms where they were ‘supposed’ to, I think that’s a great regatta for us. The Varsity Eight stood out the most in terms of putting together their best race they’ve ever put together before. That was a really tough race and a great performance by them overall.”

As a team, Lehigh finished in fifth place overall with 29 points, only two points behind Georgetown in fourth and one ahead of MIT in sixth. Boston University won the team championship with 50 points, followed by Bucknell in second (48) and Navy in third (46).

The Varsity Eight posted a second-place finish in its morning heat, recording a time of 7:14.629, more than three seconds ahead of Bucknell (who went on to win the grand final).

Great finish by the Varsity Eight this morning to take second in its heat! pic.twitter.com/8fUzGWOwqx

What a tight race in the Varsity Eight grand final as the Mountain Hawks finished fourth this afternoon, just five seconds behind Navy in third and less than 15 seconds out of first. pic.twitter.com/WTlhpNfJpK

— Lehigh Rowing (@LehighRowing) May 13, 2022 Friday marked the closest the Mountain Hawks’ Varsity Eight has ever been to Navy, an annual Patriot League contender. Lehigh’s Varsity Eight also defeated Georgetown for the first time in program history.

“This was the first time that the Varsity Eight put a lot of scare in a lot of the other teams in terms of potentially being able to medal and steal the race away,” said Conley. “I think that says a lot to the growth of the program, but more importantly, to the leadership the seniors have brought to the program. We’re going to miss them a lot, but they’ve left something for everybody else to pick up and carry forward for us.”

The spring season saw plenty of highlights, capped off by Friday’s performance, as the program looks to continue raising the bar moving into 2022-23.

“We were a really young team,” said Conley. “Coming in in the fall and having gone through COVID and everything, I think at the end of the day, they really did a great job in terms of listening to what they wanted us to do, but more importantly, they set their own goals of what the team should be achieving. They went out there, raced it and had their best performance of the season.”