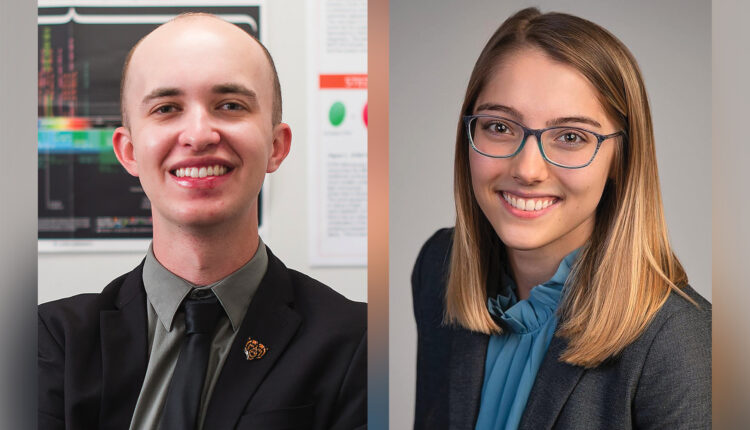 “Tau Beta Pi is the oldest, largest and widely considered the most prestigious engineering honor society,” said Dr. Laura Lackey, Dean and Georgia Kaolin Industry Chair of Engineering. “We are delighted that two School of Engineering graduates were selected to receive Tau Beta Pi Fellowships. Gabrielle and Maison are outstanding engineers and are most worthy of this award.”

Clouatre, from Mount Airy, earned his bachelor’s degrees in electrical engineering and mathematics this spring and will pursue his Ph.D. in aerospace engineering at Texas A&M University.

He will receive the Centennial Fellowship, which was first presented in 1985 to commemorate Tau Beta Pi’s 100th anniversary and honor the Society’s most outstanding fellow.

His research interests include control, optimization, and machine learning and their applications in aerospace engineering and quantum information science. He aspires to pursue a career as a researcher and professor.

Rogie, from Savannah, earned her bachelor’s degree in biomedical engineering with minors in chemistry and biology in 2021 and is pursuing both her master’s in engineering and Doctor of Medicine degrees through Texas A&M’s EnMed dual-degree program.

She will receive the James Fife Fellowship, which is presented to five students each year in memory of the father of late Tau Beta Pi member William Fife.

Rogie was a Mercer Undergraduate Biomedical Scholar and participated in numerous research projects as an undergraduate, including modifying TSLO body braces for treatment of Adolescent Idiopathic Scoliosis (AIS), biomechanical analysis of genu recurvatum and non-rigid bracing options for AIS.

She is passionate about AIS research, as she has dealt with scoliosis and spent almost a decade advocating for young girls with scoliosis through Curvy Girls Scoliosis support groups. She plans to continue investigating bracing options for AIS patients to increase patient compliance in brace wear and aspires to become a pediatric orthopedic surgeon.

More than $8.3 million in grants will have been awarded when Tau Beta Pi’s 89th class of fellows completes his graduate work. This year’s awards bring the total to 1,767 fellowships since the program began in 1929.

All Tau Beta Pi Fellowships are awarded on the competitive criteria of high scholarship, campus leadership and service, and promise of future contributions to the engineering profession. Fellows are members of Tau Beta Pi and may pursue graduate work at any institution.

Tau Beta Pi, the engineering honor society, was founded at Lehigh University in 1885. With 251 collegiate chapters and 47 active alumni chapters, it has initiated nearly 624,000 members in its 137-year history and is the world’s largest engineering society.

About the School of Engineering

Mercer University’s School of Engineering, founded in 1985, offers innovative and academically challenging programs that provide students with a comprehensive education, featuring a solid foundation in mathematics and sciences, a core engineering curriculum, a range of courses in engineering specialties and a strong emphasis on communication technologies. The School is consistently ranked by US News & World Report as one of the top three master’s-degree-level engineering schools in the Southeast. Known for its breadth of instruction in its undergraduate program and its five-year joint bachelor’s and master’s degree program, the School combines technical education with hands-on laboratory experience. Mercer engineers can look forward to joining fellow alumni in companies such as Robins Air Force Base, Mercer Engineering Research Center, Northrop Grumman, Georgia Power, Manhattan Associates and Gulfstream Aerospace.