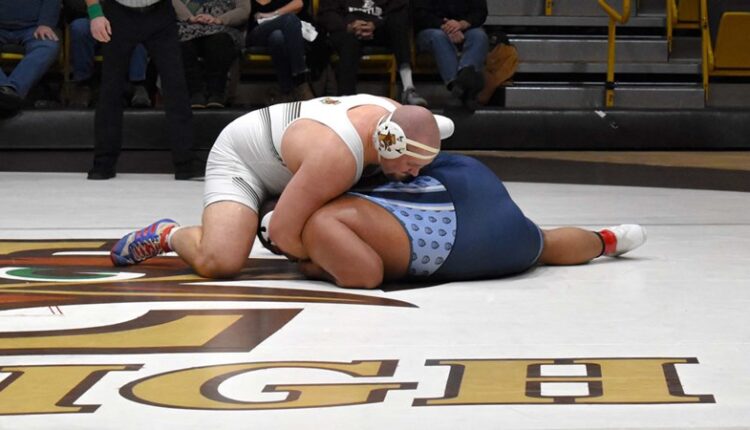 BETHLEHEM, Pa. – After seven fights, 16-8 behind Columbia, No. 17 Lehigh fought back to conquer the last three. A first-period pin by senior Jordan Wood at 285 led the Mountain Hawks to a 20-16 win over the disgruntled Lions Friday night at Grace Hall’s Leeman-Turner Arena.

The teams split the 10 bouts 5-5, but Lehigh capitalized on a 5-1 lead in bonus points to earn his third straight win.

Wood’s exploits preceded two-point decisions by sophomore AJ Burkhart with 184 and freshman-year JT Davis with 197. Lehigh is now 7-4 in doubles this season while Columbia falls to 1-2.

“We knew Columbia had a lot of good wrestlers,” said Lehigh head coach Pat Santoro. “We didn’t do well at setting the pace. We stood around a lot in the first half. We gave them a lot of confidence. We didn’t do that a week ago and that made the difference.”

“When we’re aggressive we’re a really good team,” Santoro continued. “I think we showed that. When we’re not aggressive, we’re average. We work far too hard to stand around and wait for something to happen. Nobody goes out there trying to lose. Our guys want to win but we have to have short memories and get this thing over with and fire tomorrow.”

The duel started at 125 where 20th-ranked Joe Manchio defeated 15th-ranked junior Jaret Lane 4-3. Manchio had the only takedown of the fight in the first period, breaking a 3-3 tie with a two-minute drive advantage.

Malyke Hines responded with a 12-9 win over Angelo Rini at 133 to level the score at 3-3. Hines led 4-1 after one and added a second-period reversal. A takedown in the third period thwarted Rini’s late rally.

Columbia won the next two fights and went 10-3 after four. At 141, 19th-ranked Matt Kazimir capitalized on a strong second period at the top to win an 11-1 major over Connor McGonagle. Kazimir rode out the second period and flipped McGonagle three times.

Paul Watkins earned the nod at 149 for Lehigh but dropped a 9-3 decision on Danny Fongaro.

Junior Josh Humphreys gave Lehigh some momentum at the break with a 17-2 technical fall against Andrew Garr at 157. Humphreys led 10-0 after one period and added a takedown in each of the last two periods, plus two escapes and a drive time advantage. The fight lasted the full seven minutes as Lehigh was 10-8 down at the break.

Josh Ogunsanya of Colombia won a 7-2 decision over sophomore Brian Meyer with 165, and then Nick Fine beat first-year Jake Logan with 174 to extend the Lions’ lead to 16-8 with three fights left.

Burkhart started the Lehigh comeback with a 4-2 decision over Brian Bonino. He posted a first-period takedown and a second-period escape, as well as a 1:21 drive time advantage.

“AJ won, but he was in a fight tonight,” Santoro said. “I’m glad we saw Columbia at a double meet. Our boys now know how good they are. If we see them at the conference tournament or at the NCAA, we have to be ready.”

After missing the duels last week, Davis returned with a 2-0 win over Sam Wustefeld at 197. Davis rode the second third with a strong performance up front and got away in the third to put Lehigh at 16:14.

“JT and AJ just gutted it tonight,” Santoro said. “JT hadn’t fought in a week but he stepped up and found a way to win. He stuck with it and that was really important. He gave us a chance to win at heavyweight.”

In the winner-take-all heavyweight bout, Wood scored an early takedown on Jalen Stephens and added a pair of four-point near falls before securing his first fall of the season at the 2:50 mark.

“Jordan has been special since he’s been here,” said Santoro. “He’s a special person and a really good wrestler. We’re really lucky to have him.”

Lehigh now leads the all-time series against Columbia 19-1 and has won 13 matches in a row in that series.

The Mountain Hawks are back on action tomorrow afternoon when they greet the Navy at the annual Billy Sheridan Memorial Dual and Salute to Service. Game time is set at 2:00 p.m. Per Lehigh Athletics’ updated viewership policy, no new tickets will be sold, but the duel will be broadcast locally on Service Electric Network 2/502 and streamed on FloWrestling. The audio broadcast will be available from 1:45 p.m. on Fox Sports Radio 94.7 FM and 12:30 p.m. on Easton and LVFoxSports.com