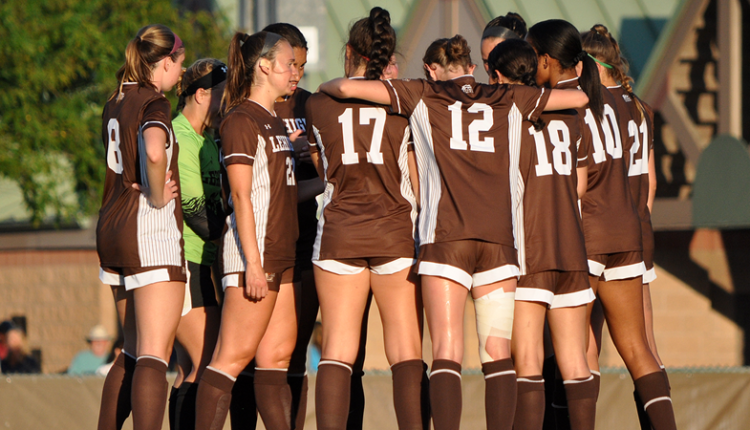 Last season (when she was associate head coach), the Mountain Hawks showed flashes of brilliance, ultimately earning the No. 5 seed in the Patriot League Tournament.

Now, Calabrese is primarily focused on one word, consistency, to help the program take the next step.

This preseason, Calabrese has felt an energy among the group, which will help the Mountain Hawks reach that goal.

“It’s definitely an exciting time to be a part of our program,” she said. “As we wrapped up our first week of training and head out of double sessions and into regular season play, we’ve been focusing on our team identity, how we define ourselves and how our opponents see us.”

How will opponents see the Mountain Hawks? Let’s take a closer look.

Anchoring Lehigh’s defense are four talented goalkeepers, with three returnees and a first-year.

“It has certainly made for a competitive preseason,” said Calabrese. “We’re really excited to see how that plays out. It’s definitely a competitive position, and an essential piece. It’s a backbone of our defense and also a trust position.”

Among those competing in goal are junior Violette Bonvallet and sophomore Abby Trainor, who split time last season – Bonvallet with a 1.57 goals against average and 73.8 save percentage, and Trainor with a 1.37 GAA and 74.5 save percentage.

“If our back line trusts our goalkeeper, we’re a team that’s looking to keep the ball at our feet and play out,” said Calabrese. “We have a number of players who are very confident with the ball at their feet, but can also make some great saves, so we’re really excited on that end.”

In front of the goalkeeper, the Mountain Hawks’ back line will be led by graduate student and two-time All-Patriot League honoree Erin Keefe.

“Having Keefe return is outstanding,” said Calabrese. “She provides some consistency and wisdom back there. Her knowledge of the game and her experience as an All-League player inherently gives her respect across the league and within our team, but also her work habits and her role as a captain really elevate her position and underscores the importance of it.

“I’ve really seen a development in Erin over the past couple months, just vocally in terms of her organization and communication,” Calabrese continued. “She’s always been a great 1v1 defender, but what makes a leader in the back line is your ability to bring others together, to communicate and to solve problem in space and put opponents in tough situations.” Keefe will be surrounded by plenty of experience, including junior Emma Roesing, who also scored the game-winning goal in the 90th minute at Lafayette last season.

“Emma historically has played center back, but also outside back and she’s super reliable, really good with the ball at her feet and great at decision making, so she’s been playing on the right,” said Calabrese. “We have Julia LaLama, who’s a senior and has gotten some minutes throughout the spring and has had some success back there in terms of her overall athleticism. We also have [sophomore] Hope Flanegin who is just a grinder, a physical player, team player and super reliable in terms of work rate.”

Junior Imani Ashman has emerged on the back line as well.

“We shifted her to the back left, outside back in the spring,” said Calabrese. “Imani is really reliable in her 1v1 defending, her distribution and her understanding of the game.”

Multiple first-year players are competing for time in the back as well.

“For us, we want to be super disciplined in the integrity of our defending,” said Calabrese. “That starts all over the field.”

“Rye can win 50/50 balls and really dictates the play, just in terms of her ball-winning ability and her aerial presence,” said Calabrese. “She also understands spacing. She’s good with the ball at her feet, so I’ve really seen improvement in her and her style of play of wanting to keep the ball and advance it to the midfield.”

Other veterans returning in the midfield include seniors Mattie Murphy and Chloe Sherman, along with junior Alex Odle.

“Mattie and Alex are very technical players as well,” said Calabrese. “Both are seasoned and respected, and have seen a lot of minutes the past couple of seasons. I’m very excited to see how their technical mastery and ability to read and solve space informs our team style of play. To get the ball through the thirds is critical for us.

“Chloe is another player who has stood out,” Calabrese continued. “She’s super technical, very engaging and crafty in the final third. She can play creative balls and final passes that allow our attacking personalities to express their skill sets in the final third.”

Lyght also had a flair for the dramatic with the game-winning 90th-minute assist at Lafayette and 90th-minute goal vs. Colgate. “Ava is a hard-nose defender, great with her back to the goal, a threat on the dribble, and combines very well,” said Calabrese. “Corrine can play a number of positions and typically does. Her overall athleticism, speed and ability to turn defenders is exciting and honestly, I think she’s just starting to tap into what she’s capable of doing.”

Last season, junior Wendie Fisher began finding a strong niche in the lineup, which has only continued.

“Wendie brings a lot of energy and tenacity to her play,” said Calabrese. “We also have [senior] Julianna Bonner, who is just a force out wide. She has such a presence as a leader, on and off the field, and has an ability to go 1v1, put balls in the box and get on the end of crosses. She’s locked in, dialed in and ready to go. She’s a game-changer, so I’ve been pleased with her leadership skills.”

Another senior, Ciara Saxton, saw increased playing time last spring, and has taken that momentum into the fall.

“Ciara brings some speed and I’m impressed with her development, tactically, just in terms of her understanding of the game,” said Calabrese. “She had a really nice goal off a secondary ball from Bonner in one of our scrimmages.”

Like all across the field, the forward line includes plenty of first-years looking to make an impact as well.

The Mountain Hawks are in the middle of a head coaching transition. It’s a unique transition, in that there is consistency among staff (with Calabrese being elevated to head coach and volunteer assistant coach Bill Moukoulis also returning), but a feeling of a new start at the same time.

“We’re not trying to reinvent the program,” said Calabrese. “We’re not trying to start from scratch. We’re trying to build from a team that was in a great position. The pieces are there and it’s just creating these sustainable habits and that will take time. Creating habits isn’t something that happens overnight.”

This Mountain Hawks’ coaching staff brings a diversity of thoughts and perspectives, which will help as well.

“I’ve been thinking about our space in coaching as a collaborative space,” said Calabrese. “Really tapping into our skill sets as coaches, as people and as professionals and thinking, ‘how do we leverage that to synthesize the best approach, day in and day out?’

“We also want to be consistent in what we’re doing, so the women in our program, our fans and our community have a really good understanding of who Lehigh is and how you would define Lehigh soccer.”

How would Calabrese define the 2022 Lehigh women’s soccer team?

“Each semester, you’re getting a new team,” she said. “We have talent and ability, and it’s going to be exciting to watch the team take ownership of the experience. We’re focused on creating a mentality where we are going to win, we are going to achieve. I believe there’s a difference in terms of the mental approach of a game and you’re already starting to see it shift. Having higher standards for our team in training sessions and games, and coming from a place of pride.”

Calabrese couldn’t be more excited about the team’s leadership, which is another piece that will help the Mountain Hawks reach their goals.

“I’m thrilled that we have three captains – between Keefe, Rye and Bonner – who are dedicated to not just agreeing and saying ‘yeah,’ but taking ownership and being part of a conversation. And just because you’re not named a Captain, doesn’t mean you’re not a leader in your own way.So just having a larger understanding that creating that space for open dialogue [is important].” Everything goes back to one word… consistency.

“Where do we want to go and how are we going to get there? To me, it’s about consistency of messaging, consistency of individual habits and consistency of performance,” said Calabrese. “It’s from everybody – from all 29 players to all of our staff members and our high-performance development team.”