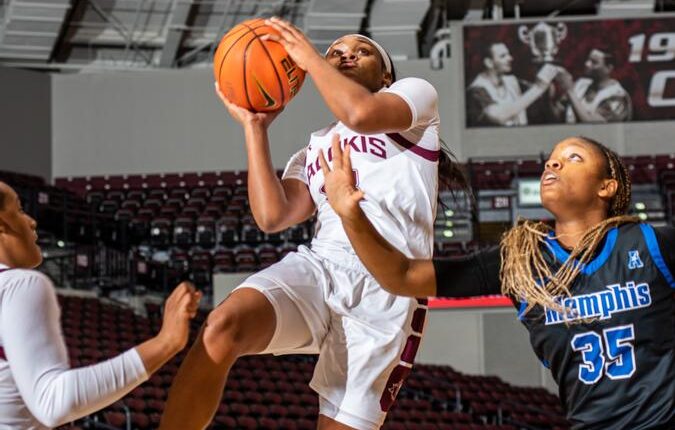 It came down to the wire but the Southern Illinois Women’s Basketball team fell to Memphis Tuesday at the Banterra Center as the Salukis now look to this weekend’s Christmas City Classic, hosted by Lehigh University.

After a furious comeback in the second half, the Tigers held off a stingy Saluki squad to take their fourth win of the year, 89-76.

Despite the double-digit loss, the Salukis were in the game throughout the fourth and even had the game tied at 65-65 with 7:03 left but the Tigers closed out the game hitting shot after shot.

The Salukis have struggled in the first quarter so far this season but Tuesday they looked more comfortable in the opening frame as the Dawgs held a 22-21 lead after the first, including seven players earning their way into the scoring column.

Southern also had its strongest shooting start of the season as it went 10-of-17 from the field and 2-of-4 from the line and the first 10:00.

Memphis outscored SIU 19-13 in the second and held a 40-35 lead going into the half but the Tigers didn’t carry its hot shooting into the contest as they were just 13-of-35 from the field and 0-of- 7 from beyond the arc at the half.

The Tigers held a 64-55 lead going into the fourth before freshman Jaidynn Mason scored eight of her 10 points in the frame as SIU started the fourth on a 10-1 run to tie the game before Memphis put it away in the final five minutes .

Ashley Jones led the Salukis with 15 points while Laniah Randle scored 14 points in the loss, both Saluki-highs for the duo.

Jamirah Shutes led Memphis in the win as she was one of five Tigers in double figures. Shutes (21 points), Destyne Jackson (14 points), Emani Jefferson (12 points, 7 rebounds) and Madison Griggs (11 points, 6 rebounds) all had big nights for the Tigers.

Southern starts play in the Christmas City Classic on Saturday when it takes on host Lehigh.

Lehigh (2-3) is coming off of an 84-61 loss to Drexel on Tuesday but prior to their loss, the Mountain Hawks put up more than 90 points in back-to-back games for the first time in program history.

The tip is set for 11 am (CST) in Bethlehem, Pa. Kent State and Quinnipiac are in the second semi-final after the Salukis take on the Mountain Hawks.