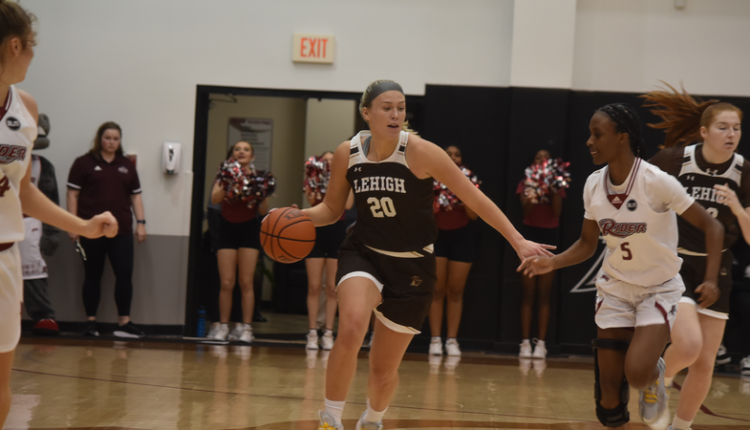 LAWRENCEVILLE, NJ – It was a nail-biter game for almost the full 40 minutes, and it was Lehigh women’s basketball who came out on top, soaring to a 81-67 victory over Rider Wednesday night at Alumni Gymnasium.

“We talked about it before tonight’s game how we were five possessions away from being a 5-2 team instead of 2-5 so our focus was coming in, let’s earn those possessions, ” said head coach Addie Micir. ” At the end of the game, when it was tight, we earned those possessions, and I couldn’t be more proud.”

Frannie Hottinger had a monster night for the Mountain Hawks, scoring a career-high 34 points and adding a team-high 13 rebounds. The 34 points were the most scored by a Lehigh player since Camryn Buhr scored 36 against Army in 2020.

The single-game individual Lehigh scoring record is 37 points, which Liz Feeley set in 1986. Hottinger was just three points away from tying that.

It was a one-point game with 8:25 to play, but after a Mackenzie Kramer layup put Lehigh up three, the Mountain Hawks took control, outscoring the Broncs 19-5 the rest of the way.

The Mountain Hawks shot 50.8% from the field. Hottinger and Kramer were the only players to score in double-figures, with Kramer adding 26 points.

“I thought Frannie and Kenz really held it down,” Micir said.” Frannie the whole way Kenz stepping up when she really needed to, and those two had some moments where they really fed off of each other, so I’m so pumped for them and the team. It’s a really good win.”

Three Broncs finished in double-figures. Jessika Shiffer had a team-high 19 points, Raphella Toussaint had 13 points and Makyala Firebaugh had 14 points.

Lehigh’s largest lead of the game came right at the end when Kramer scored a layup to put Lehigh up 14.

This was Lehigh’s second straight win over the Broncs.

The Mountain Hawks were up 12 in the second quarter, but Rider clawed back to cut Lehigh’s lead to 36-34 at the half.

“The message was guarded the three-point line,” Micir said. “I would have hoped we would have done that sooner, but it was get up and play. Let’s see what they can do.”

The Mountain Hawks will look to make it two straight wins when they take on La Salle at 2 pm on Saturday in Philadelphia.

“Every game is motivating, right, but marking a game in the win column, it means a lot and it helps us breathe a little,” Micir said. “We know La Salle is going to be a shootout, they’re a team that likes to shoot the three like us, so it should be an exciting basketball game.”