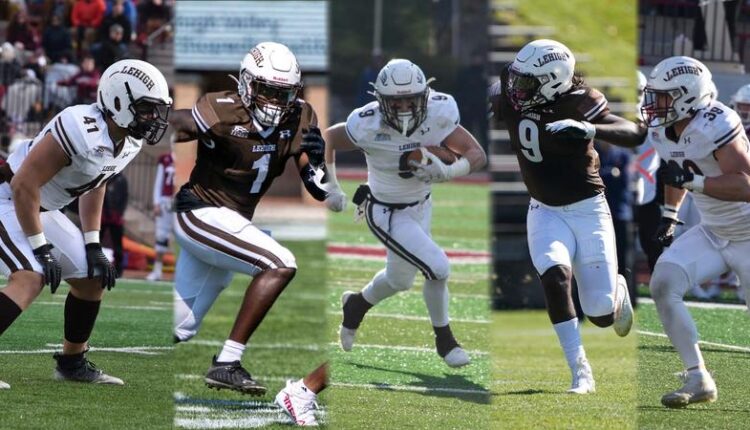 The Patriot League major awards and all-league teams are voted on by the league’s head coaches.

Jamiel becomes just the third Lehigh football player to win the league’s Rookie of the Year award and the first since Dom Bragalone won it in 2015. Lehigh’s leading receiver in 2022, Jamiel hauled in 53 passes for 649 yards and a touchdown. He caught at least three passes in each of Lehigh’s 11 games this season, with a high of seven against Bucknell in October. Jamiel had a season-high 91 receiving yards at Lafayette last weekend and scored his lone touchdown of the season on a 39-yard screen pass at Holy Cross on Nov. 5. During the season, Jamiel was a two-time Patriot League rookie of the Week.

Leach ranked third on the Mountain Hawks with 78 tackles and added 11.5 tackles for loss to rank second on the team. He picked off a pass at Princeton in late September and was named Patriot League Defensive Player of the Week following a 14-tackle, three-tackle for loss effort in Lehigh’s 21-19 win at Georgetown on Sept. 10. Leach matched a career high with three tackles for loss at Lafayette on Saturday.

Sibblis was a second team honoree for the second consecutive season. A team captain, Sibblis finished with 40 tackles, six tackles for loss and 1.5 sacks in 2022. Sibblis made a season-high eight tackles in Lehigh’s opener at Villanova and added five tackles and 1.5 sacks at Princeton.

Lehigh’s top tackler, DeNucci earns his first career all-league recognition. DeNucci finished with 93 tackles, including 16.5 for loss, and 8.5 sacks as he led the Mountain Hawks in all three categories. Last month, DeNucci was named to the watch list for the Buck Buchanan Award, given to the top defensive player in the FCS. He was named Patriot League Defensive Player of the Week after recording 11 tackles and three sacks at Princeton on Sept. 24.

A sixth-year senior, Norris ranked second on the Mountain Hawks with 83 tackles and added six tackles for loss and 3.5 tacks. Norris was named Patriot League Defensive Player of the Week on Nov. 14 after making a career-high 14 tackles along with 1.5 sacks and the game-clinching interception in Lehigh’s 36-33 win over Colgate. He added a pair of pass breakups, a forced fumble and a fumble recovery in his final season in the brown and white.