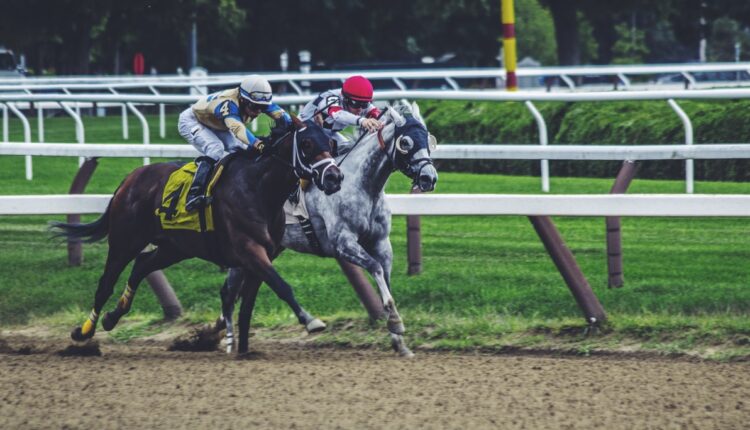 Whether it’s for funding students at Pennsylvania’s 14 state-owned universities or another purpose, the majority of registered voters in Pennsylvania believe tax revenue from slot machines in the commonwealth should be reallocated away from the horse racing industry, according to a new poll.

Eighty-three percent of respondents to the June 7 poll by the Center for Opinion Research at Franklin & Marshall College said they believe that the state should use tax revenue generated from slot machines for other purposes. Another 10 percent of respondents said it should continue to support the horseracing industry, and seven percent said they did not know.

“There is clearly little appetite for taxpayer-funded horse racing,” Susan Spicka, executive director of Education Voters of Pennsylvania, which advocates for quality public education in the commonwealth, said in a statement. “With so many other more pressing needs it’s hard to justify continuing this program.”

The poll asked five questions of respondents related to tax revenues supporting the horse racing industry, including whether respondents would favor or oppose using some of the tax dollars to fund scholarships for Pennsylvania state system students with unmet financial needs.

A majority of respondents (51 percent) said they strongly favored, and 31 percent said they somewhat favored, using some of the revenue to fund scholarships to state system students, such as the proposed Nellie Bly Scholarship Fund.

A risky wager? What supporters and opponents are saying about Wolf’s Nellie Bly scholarship proposal

While 82 percent of those surveyed said they would strongly or somewhat favor using the tax revenue to fund educational scholarships for state system students, Pennsylvania’s status as one of the state’s with the highest public college tuition rates, was not a deciding factor for respondents.

Respondents also were asked if they would continue to support the horse racing industry if they knew 1,400 horses died in the past 10 years as a result of racing-related injuries.

Petitioning for a Change

The moral and ethical concerns around horse racing led one national organization to target the industry in May, at the height of derby season, with an online petition calling for Gov. Tom Wolf to end the $239 million in subsidies the Pennsylvania Race Horse Development Trust Fund receives.

The petition circulated by Horseracing Wrongs, a nonprofit organization advocating for the eradication of horse racing in the United States, had garnered nearly 40,000 signatures as of noon on Monday.

“Horse Racing is animal abuse. There is no excuse for abuse! This ‘sport’ should be banned, not subsidized! The money saved should go toward [the] education of young people. They are our future, after all! Please, do the right thing! It’s long overdue!” one signer wrote.

Others said they weren’t comfortable with Pennsylvania taxpayers footing the bill to subsidize the industry.

“Horse racing must end and so should the subsidies,” one petition signer wrote.

Another agreed, adding “I don’t believe taxpayers should be paying for a private industry. If it’s not private, it should be.” 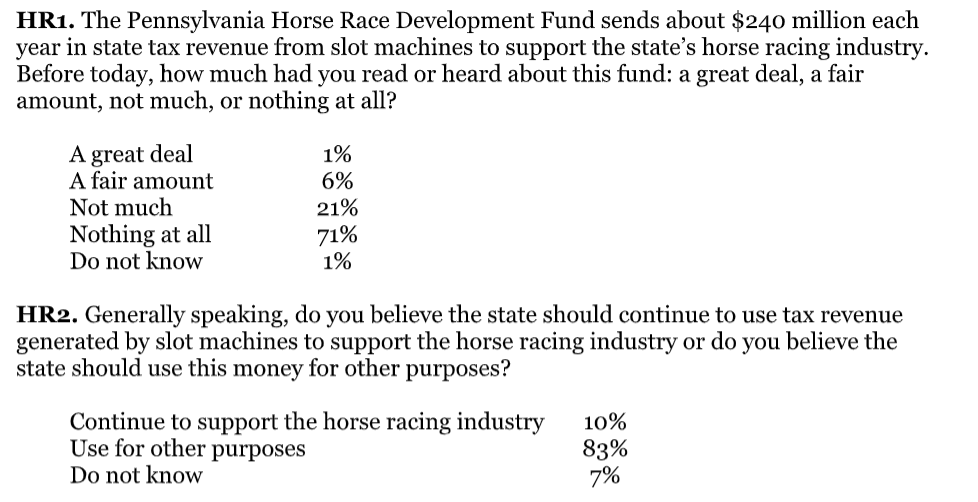 “It is not unusual in a survey for people to offer an opinion when asked, even if they don’t have a lot of information about the topic,” Berwood Yost, director of the Center for Opinion Research at Franklin & Marshall College, told the Capital-Star. “I think the reaction to the question simply comes from the fact that as respondents understand the program, given the description in the prior question, they feel like there are better uses for that tax revenue.”

The Franklin & Marshall College poll was conducted from June 7-13. It sampled 444 voters, including 205 Democrats, 177 Republicans and 62 Independents and has a margin of error of 6.4 percent.