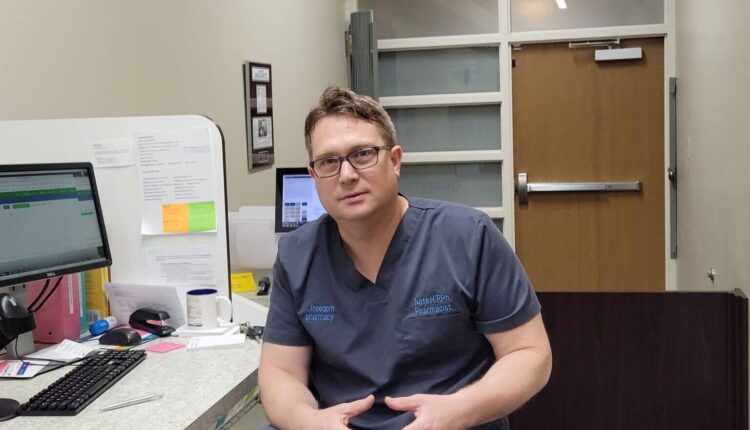 Pharmacist Nate Hux at Freedom Pharmacy outside of Columbus, Ohio. Hux last year started the pharmacy, which operates outside the insurance system, to help patients save on generic drugs. A small number of similar operations are popping up around the United States (Photo by Marty Schladen, Ohio Capital Journal).

For a growing number of pharmacists, using insurance to pay for most generic drugs makes about as much sense as getting auto insurance to cover your oil changes.

Problem is, if you try to buy generics without using your insurance card at the vast, vast majority of American pharmacies, you’re going to pay a “cash” price that is wildly inflated by the crazy system of middlemen, rebates and cost-shifts imposed on pharmacies by the insurance system.

The result, unbeknownst to many consumers, is that your copayment for many generic drugs is often more than what the entire price would be if you could get them on a truly open market.

An Ohio patient recently was making a $141 copayment through her insurance for 180 pills of Celecoxib, a generic version of the anti-inflammatory drug Celebrex. When she went to a new pharmacy that eschews insurance, she was able to get it for $23.05.

That means the copayment for the drug is six times as much as what drug cost on the open market — even when you add in a dispensing fee.

And the cash price in a pharmacy that takes insurance — which is almost all of them? About $1,165, or 50 times as much as if she could get it from a secondary wholesaler, the pharmacy equivalent of the open market.

That vast cost difference is only part of the reason why Nate Hux and a tiny number of other pharmacists in the United States are starting up pharmacies that exclude insurance companies and their middlemen: pharmacy benefit managers, or PBMs. Hux said it also allows him to be a better pharmacist because it’s a cleaner system that pays him only to practice his profession.

For patients, the savings and better health outcomes can be intertwined. Particularly benefitting are customers with no insurance and the growing number who are on high-deductible plans.

“They just don’t take medicine because it’s stupid expensive,” Hux said recently as he leaned against the counter at Freedom Pharmacy outside of Columbus. “So we opened the door for them to be able to take 90% of the medicine that’s out there at a reasonable price: $15 or less for a 90-day supply. Why do we need insurance for $15 for a 90-day supply?”

After long consideration, Hux in December opened Freedom Pharmacy in a suite next to Pickerington Pharmacy, which he also owns and which operates within the insurance system.

“We have a pharmacy living in both worlds, so we can help guide a patient to the best world for them to live in,” he said.

For patients taking some drugs, insurance is essential.

The most expensive medicines, brand-name and specialty drugs, are typically under patent and can cost thousands or even tens of thousands of dollars a month. So it makes sense to insure yourself against that expense the way you would your car against collisions or your house against fires and floods.

That means they can’t take advantage of savings that have been generated by a revolution in generic drugs.

In terms of volume, generics made up just over half the prescription drugs dispensed in 2005. In 2019, they made up more than 86 percent.

You often wouldn’t know that when insurers and pharmacy-benefit managers are involved. For example, the anti-HIV drug Truvada last year went off of patent. But when 11 generic versions flooded the market this spring, the cash price at traditional pharmacies was actually higher than that for the patented drug.

The increase is caused by a tangled mess of manufacturer discounts to pharmacy benefit managers, non-transparent reimbursements by PBMs on which pharmacies often lose money, and their need to make money on cash prices to offset those losses.

But the bottom line is that a person can to go to Blueberry Pharmacy — a shop outside of Pittsburgh that doesn’t use insurance — and buy a generic version of Truvada for $25 a month. In a traditional pharmacy, an uninsured customer would face a markup on a baseline price of $2,100.

“As I saw how inexpensive these medications are, there’s no way you’re not going to have a cost increase with insurance,” he said.

Greg Lopes, spokesman for the Pharmaceutical Care Management Association, the PBM industry group, last month insisted that the middlemen working for the insurers (often as part of the same corporation) bring value to all types of drug transactions.

Be that as it may, the current system of manufacturer discounts is forcing arbitrary list prices ever higher and increasing the pain for many patients, critics say. It’s felt by the uninsured as well as the increasing numbers of those who are on high-deductible plans and who have to pay coinsurance, said Robert Popovian, a former Pfizer vice president who, as both a pharmacist and an economist, now works as a consultant and analyst.

Not so with coinsurance for prescriptions.

“Pharmaceutical benefit is the only benefit within the health care system that patients end up paying their coinsurance based on a retail price rather than a negotiated price,” Popovian said.

The same is true for the uninsured and those who have to pay full freight until they meet their deductibles. Their payments are based on list prices manufacturers are inflating to make up for non-transparent discounts they’re providing pharmacy benefit managers, Popovian said.

It’s a problem with which Chris Johnson has long been familiar. He opened his non-insurance Medsavers Pharmacy in Austin, Texas, in 2005.

Being in a state that long has had the highest rates of medically uninsured, he knew what those people faced at the pharmacy counter.

Johnson said he’s done a brisk business. But most of the dozen or so pharmacies in the country operating outside the insurance/PBM sphere when he started have fallen by the wayside for reasons unknown, he said.

Now the only insurance-free pharmacies the Capital Journal could find were Johnson’s in Austin, Hux’s near Columbus, McCormick’s near Pittsburgh and Genscripts, which operates five locations in Oklahoma.

However, two of them have opened their doors since 2020 and they might represent a way forward for independent pharmacies.

One reason independents are important is that they’re the only game in town for many small communities, and their loss could create pharmacy deserts in some areas.

Even so, independents are the only class of pharmacies to close stores faster than new ones opened between 2015 and 2019, according to data from the National Community Pharmacists Association.

“There are still new pharmacies opening and trying to make their way with many focused on different types of revenue sources and services,” said Kurt Proctor, NCPA’s vice president for strategic initiatives.

“I think it’s a very viable business model,” he said of pharmacists operating at least partly outside the insurance/PBM sphere.

For Hux, the financial advantages for customers are undeniable. But he said he has an even bigger reason for pursuing a non-insurance model.

At Freedom Pharmacy, he charges patients what he paid for a drug and then tacks on a dispensing fee of $8 or $12, depending on whether it’s a 30- or 90-day supply.

Opting out of the insurance/PBM system fundamentally changes the economics — and Hux said it saves him from scrambling every day to fill ever more prescriptions.

“All of our profit comes from our services, like checking and vetting out the prescriptions, screening the doses,” he said. “I can tell you this: The things that you get paid for are what you become good at.”

This Pa. budget season, we must invest in safer communities | Opinion