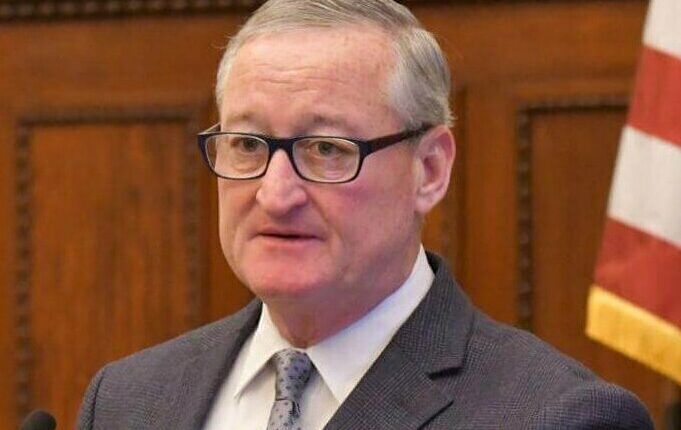 PHILADELPHIA — Mayor Jim Kenney is not ready to dump his violence prevention plan even as the yearslong upward trend of killings and shootings shows no signs of ebbing.

The mayor defended his approach to reducing gun violence in Philadelphia on Wednesday at a time when the homicide rate was up 38 percent and shootings victim rate was up 27 percent compared to the same time last year.

While Kenney and Police Commissioner Danielle Outlaw said they shouldered responsibility for the city’s homicide rate, the city’s top cop shirked blame for the rise in killings.

“Blame, absolutely not. Responsibility, yes, because it’s our job to ensure the safety of Philadlephians here,” Outlaw said.

Kenney maintained the city’s spike in killings during the past year was part of a nationwide trend — “As a matter of fact, we’re not even the worst at this point.”

But the homicide rate in Philadelphia has been increasing for years under Kenney’s watch. Killings in the city went from 277 in 2016 (the first year Kenney took office) to 499 in 2020, according to the police department’s online database.

And while killings have surged in other U.S. cities during the coronavirus pandemic, homicides in Philadelphia outpaced those in larger cities, including New York City and Los Angeles. Chicago, a city with a population of nearly 2.7 million, had more homicides as of Monday (307) than Philadelphia.

Cops also have made 1,339 arrests for Violations of the Uniform Firearms Act so far this year, up from 816 at the same time in 2020, according to police.

A budget deal hashed out between the Kenney administration and City Council members last week has put the city on track to earmark $58 million in new funding for violence prevention efforts, said Budget Director Marisa Waxman.

Another $10 million in the budget proposal would go toward restoring funding for anti-violence efforts that had been cut last year due to the pandemic — nearly $7 million for the Parks and Recreation Department and close to $3 million for the Free Library of Philadelphia.

In total, the city’s $5.2 billion proposed budget includes approximately $155 million for anti-violence efforts. Philadelphia City Council is expected to vote on the spending plan Thursday, which is expected to pass. Legislators must pass a budget by the new fiscal year, which begins July 1.

Kenney sidestepped a question about whether he believed the city’s funding level to prevent violence was adequate.

“Funding is adequate because that’s what (City) Council agreed to and that’s what’s on the table at the moment,” the mayor said.

Young: The Trail Blazers Might Want More Than Simmons for McCollum