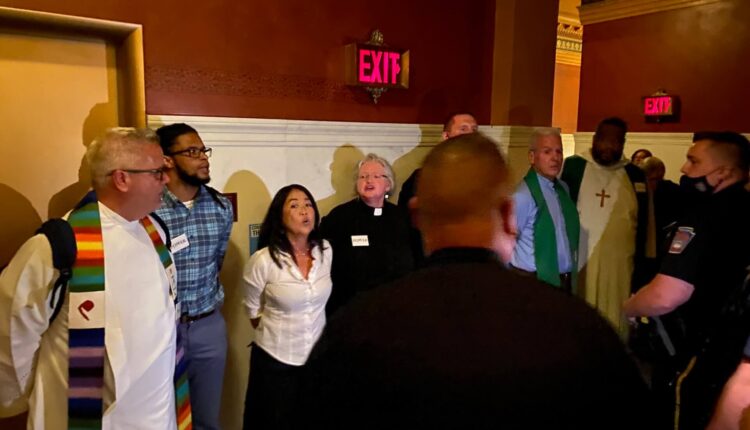 More than a dozen members of the clergy, activists, and a member of Philadelphia City Council were detained Wednesday after they unsuccessfully sought entrance to the state Senate’s public gallery and ignored a dispersal order from Pennsylvania Capitol Police.

The group, which included members of the statewide interfaith group POWER, as well as At-Large Philadelphia Councilmember Helen Gym, a likely Philadelphia mayoral candidate, gathered at the Capitol around 1 p.m. on Wednesday afternoon to visit lawmakers’ offices and to appeal to them to approve Gov. Tom Wolf’s proposal to inject an additional $1.55 billion into public education and channel all of that money through the state’s Fair Funding Formula.

Black plastic zip ties were clearly visible around the wrists of those detained and cited for unlawful assembly, according to the Philadelphia Inquirer. The protest came as lawmakers in the House and Senate raced to approve a spending plan for the fiscal year that starts on July 1.

“I feel that this is a disgrace that faith leaders who are fighting for the lives and education of Pennsylvania’s children were arrested at the state Capitol,” the Rev. Yvette Davis, a member of POWER who works out of the group’s office in Harrisburg told the Capital-Star.

Protesters in the Senate hallway pic.twitter.com/8eheYgRI9x

After stops outside the offices of Senate Minority Leader Jay Costa, D-Allegheny, and Senate President Pro Tempore Jake Corman, R-Centre, the group took an elevator to the Capitol’s fourth floor, where they tried to gain entrance to the Senate’s public gallery.

Inside, the Republican-controlled chamber was holding meetings of the Senate Government and Appropriations committees, a spokesperson for Costa told the Capital-Star.

They chant ‘Jake Corman shame on you, don’t you love our children too?’ pic.twitter.com/LMbqaOKPhB

The group were initially denied entry by security officers posted outside the doors to the gallery after being told the chamber was in recess. In response, they began banging on the door in a scene reminiscent of a similar incident in Georgia’s state capitol in March that saw a Black lawmaker arrested as she tried to gain entrance to a press conference on the Peach State’s restrictive new voting law.

Denied entry, clergy knock on the door of the Senate gallery. pic.twitter.com/rejQ1VxLYj

The protesters then staged a sit-in and an organizer said Capitol police had told him they would not be allowed entry because authorities feared they would try to disrupt the chamber’s proceedings. Capitol police officers, including one holding a video camera who was recording the proceedings, slowly began massing outside the chamber.

A short time later, a bullhorn-wielding officer declared the protest an unlawful event and ordered protesters to disperse, warning they risked arrest and the possible use of force if they refused. Slowly, groups of protesters were led away, and loaded into an elevator. They were taken to the Capitol Police’s office in the building’s East Wing for processing.

Protesters had telegraphed their intentions ahead of time, releasing a statement saying they were coming to Harrisburg to “engage in “civil disobedience” and “disrupt business as usual in the General Assembly to make sure lawmakers in the Capitol hear this call for justice,” the Philadelphia Inquirer reported.

The tactic appeared to work. The door banging and chants were audible on the Senate’s internal audio feed and live stream.