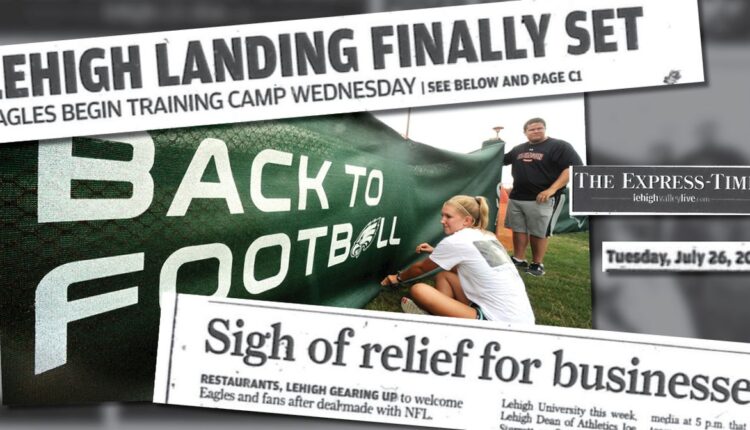 Lehigh Valley Then is a weekly series that recalls historical headlines from lehighvalleylive.com subsidiary The Express-Times and its predecessors 10, 25, 50 and 100 years ago. These stories were microfilmed at the Easton Area Public Library. The original text has been edited for clarity and length.

This Week in Lehigh Valley History: In 2011, the Philadelphia Eagles will travel to the team’s annual training camp at Lehigh University – a relief for local businesses worried about a league lockout. (Nobody knew the camp would be the team’s last in Lehigh Valley the following year.)

A pipe bomb exploded at the 1996 Summer Olympics in Atlanta, and athletes, sports journalists and volunteer security guards at the Lehigh Valley Games shared their reactions.

In 1971, STEM didn’t mean science, technology, engineering, and math; It was part of an anti-shoplifting campaign across Pennsylvania that was featured by local retailers.

And in 1921 a group of canal boat veterans relived the days of the Delaware & Lehigh Canal, taking a boat from Mauch Chunk (now Jim Thorpe) down to Bristol on the banks of the Delaware River.

That was the Lehigh Valley back then.

The July 26, 2011 front page of the Express-Times reported relief to local businesses when an NFL lockout ended and the Philadelphia Eagles returned to the team’s annual training camp at Lehigh University. It was not known at the time that it would be one of the last Eagles’ camps in the Lehigh Valley. (Inset photo: Sue Beyer | For lehighvalleylive.com)Express Times microfilm on the Easton Area Public Library

Jul 26, 2011: The fear of the Philadelphia Eagles fans in Lehigh Valley looking for a glimpse into team training in their backyard is over.

It’s over for Bethlehem companies too, and beyond that, they’ve been counting on the team’s annual training camp for years to draw the crowds in late July and August.

… The team will report in Lehigh (University) on Wednesday … and Eagles trainer Andy Reid is expected to speak to the media at 5pm that day, the team said.

The announcement came just hours after the NFL Players Association board of directors and 32 team representatives unanimously voted to approve the terms of a deal to end the four-and-a-half-month ban.

… The end of the NFL lockout and the start of training camp could mean a difference of $ 15,000 to $ 20,000 for Starters Riverport. [restaurant manager Rich Stine] said.

“Here is Christmas in training camp in July and August,” said Stine. 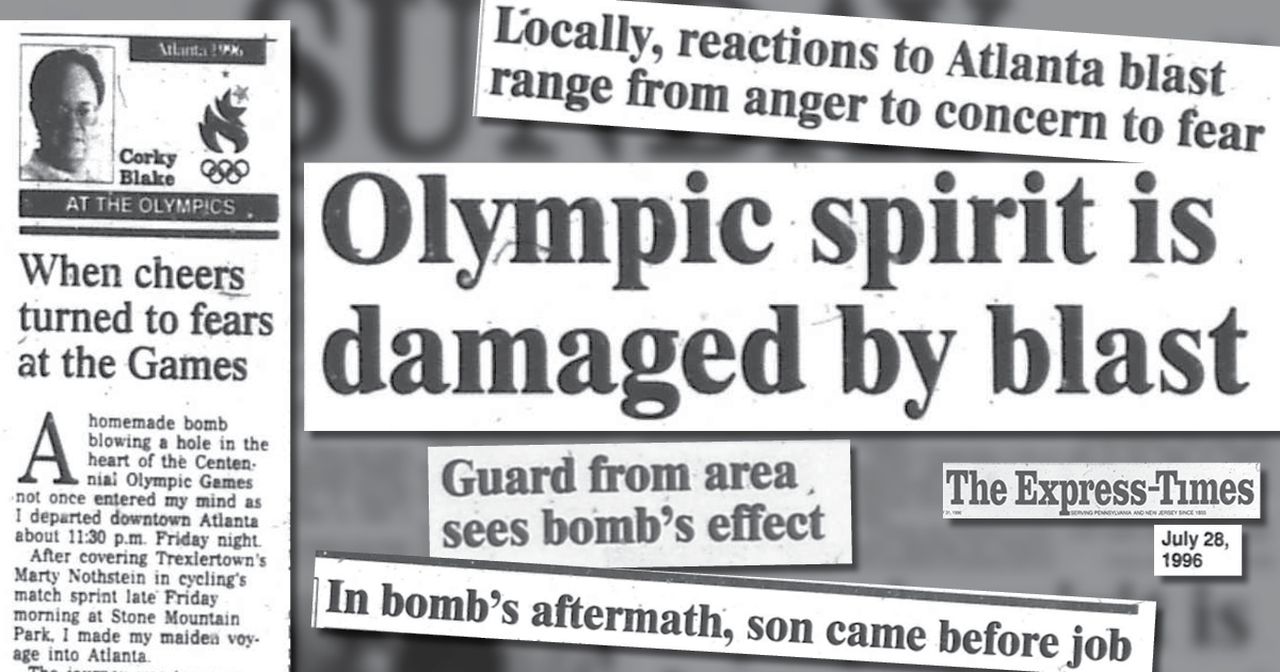 Headlines throughout the Express-Times on July 28 and 31, 1996 included reports from Lehigh Valley athletes, security volunteer, and sports journalists of the pipe bomb explosion at the Atlanta Olympics.Express Times microfilm on the Easton Area Public Library

July 28, 1996: Shortly after the bombing, local Olympians attending the Summer Games gave their reactions in a cover story titled “On the ground, reactions to the Atlanta explosion range from anger to concern to fear”:

Robert Dover, who temporarily lives in the Lebanon Township, is taking part in his fourth Olympic Games in dressage. …

“I haven’t been to the Olympics where the word terrorism didn’t come into play,” Dover said. “That has been a factor since Munich. I don’t let that influence me; I try to focus on the reason I’m here and avoid letting my energy flow into anything negative.

“It’s my way of not letting terrorism win,” added Dover. …

Marty Northstein of Trexlertown was another athlete who focused on his event. In the match sprint of cycling, he reached the gold medal final today. …

“It’s a shame what happened and my heart goes out to everyone,” said Nothstein, who lives in a house near the Olympic Velodrome in Stone Mountain Park, about 15 miles east of Atlanta. “But I’m here to win a gold medal in the Olympics and no matter what, I don’t think anything will stop me.”

A homemade bomb blowing a hole in the heart of the Centennial Olympic Games never crossed my mind as I left downtown Atlanta at around 11:30 p.m. Friday night.

After covering Marty Nothstein from Trexlertown in the Cycling Match Sprint late Friday morning at Stone Mountain Park, I made my maiden voyage to Atlanta.

… I wanted to spend the rest of the day experiencing the grandeur, pomp, and commerce of the Atlanta Olympics.

… My plan slowly fizzled out as I was swept away by the sea of ​​humanity that filled every street and pavilion within five blocks of Centennial Olympic Park, the site of the Friday night explosion.

… When we drove to Atlanta on Saturday morning, it rained accordingly. Radio reports said the main press center was closed and hundreds of reporters had been on the street. The search for bombs was the unconfirmed reason.

… The way of things … I considered staying on Route 285 and driving straight out of Georgia.

The thought only stayed with me for a second. Not only do I have a responsibility to stick with history as a journalist, but also as a citizen.

We cannot be scared into submission by this act of terrorism. As FBI special agent Woody Johnson said at a press conference on Saturday, “In a free society there is a compromise.”

In this case, the compromise was to open the Olympic Park to everyone. No security checks, although there were many security officers on the premises. No barbed wire fences.

If my schedule had been a little different, I might have been one of those people who stroll through the Olympic Park in the early hours of the morning.

I often walked past the bomb site on Friday. It’s right across from the Main Press Center.

Today this ugly light and sound tower is a major tourist attraction. Swarms of visitors stopped at the corner of Harris and Williams Streets, about a block away, to snap photos of this tower.

… Judging by the huge crowds that filled the venues on Saturday and are expected again today, terrorism is a monster that ruined a party but doesn’t control the games.

Teacher Lori Spaziani – every five feet from her – went to Atlanta to work as a volunteer guard.

In the back of her mind she had the idea that something bad could happen.

“Because I was the safety officer and was only five feet tall, I was more likely to think what I would do if something happened,” she said. “But I didn’t really think that it would happen and that I would be there.”

But she was there – off duty enjoying a concert at Centennial Olympic Park – when a pipe bomb exploded, killing a woman and injuring 111 people.

“It really sounded more like fireworks,” she said. “It didn’t sound like a big explosion. It was just loud enough to make you jump. It just seems so far-fetched that it would be like that. “

It also seems far-fetched that a security guard – allegedly a paid member of a separate force – could be a suspect in the case.

But federal agencies on Tuesday named security guard Richard Jewell as a suspect.

… Dennis O’Connell of Easton, a teacher at West Morris Central High School in New Jersey, also works as security at the Games.

“There is not so much anger but disgust that this guy is connected to the program,” he said of the Olympics on Tuesday. 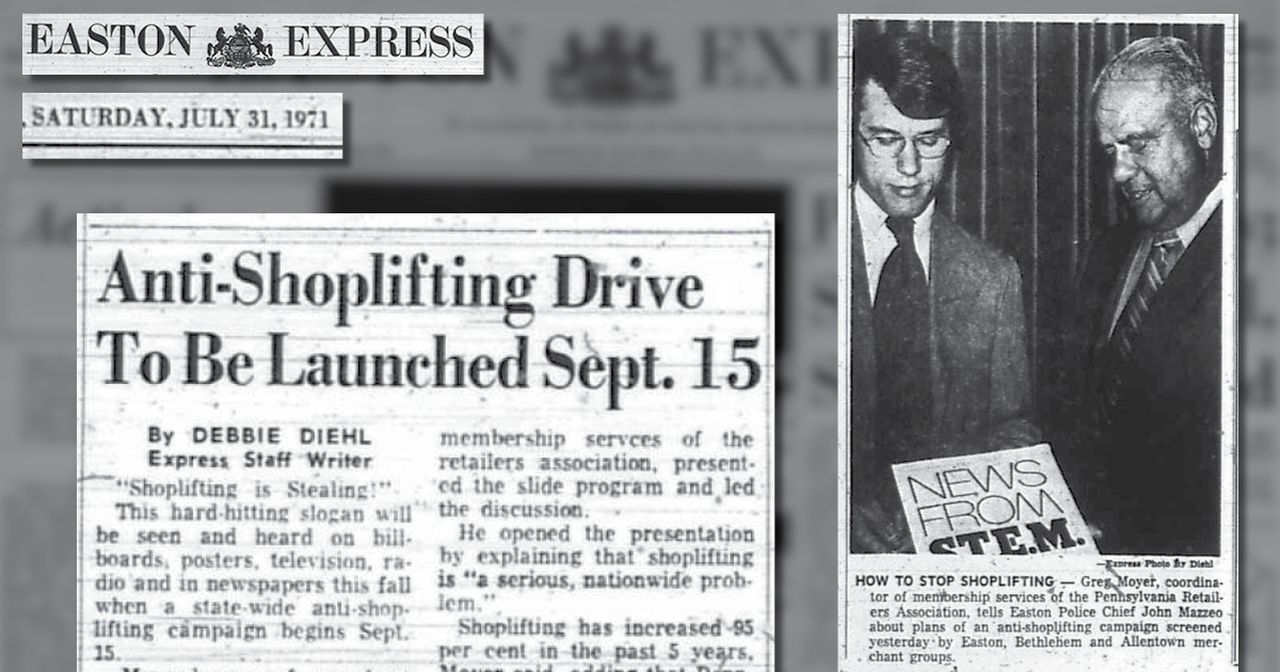 The July 30, 1971 front page of the Easton Express featured this story and a photo of a nationwide anti-shoplifting campaign featured by Lehigh Valley traders.Express Times microfilm on the Easton Area Public Library

This tough slogan will be seen and heard on billboards, billboards, TV, radio and newspapers this fall when a nationwide anti-shoplifting campaign kicks off on September 15th.

Members of trade groups in Easton, Allentown and Bethlehem demonstrated the advertising campaign at a meeting at the Hotel Bethlehem yesterday.

… “Shoplifting is the first step on the way to a criminal life” [Easton Police Chief John Mazzeo] commented. 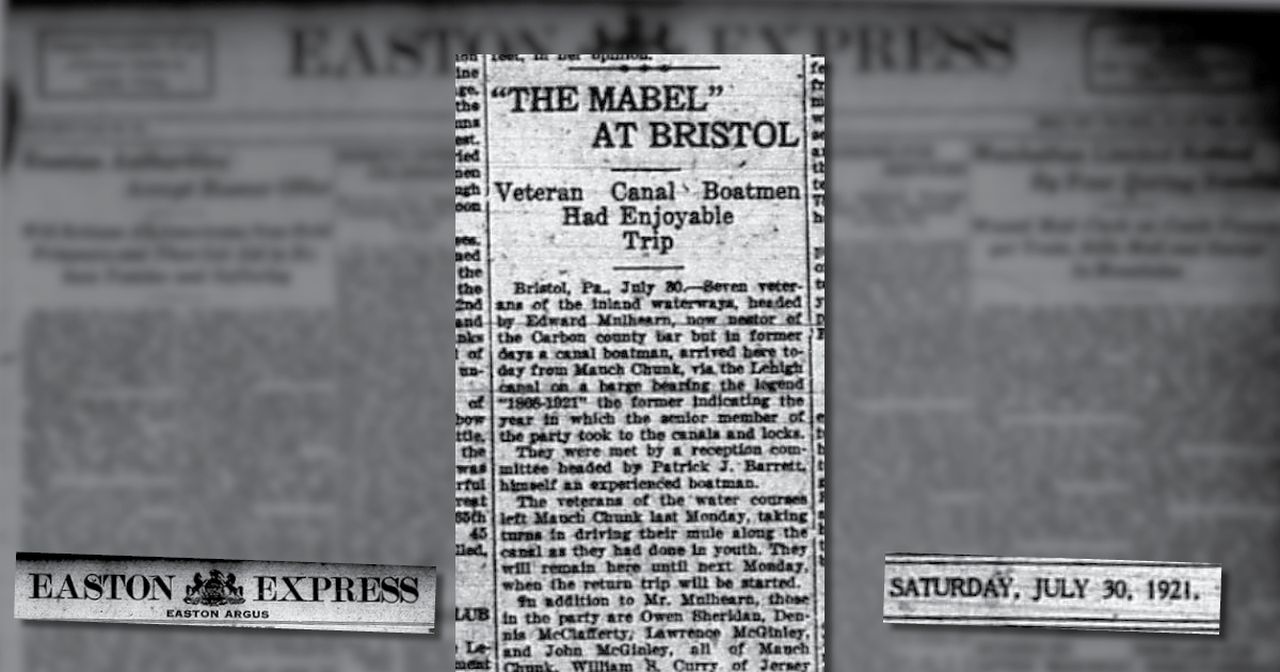 The July 30, 1921 front page of the Easton Express contains this short story about some of the canal boat veterans making another excursion on the Delaware & Lehigh Canal.Express Times microfilm on the Easton Area Public Library

July 30, 1921: Seven inland shipping veterans, now under the direction of Edward Mulhearn [illegible] the Carbon County Bar, but used to be a canal boatman, arrived [in Bristol, Bucks County] today from Mauch Chunk [now Jim Thorpe], across the Lehigh Canal on a barge labeled “1886-1921”, the former indicating the year the senior member of the party visited the canals and locks.

They were received by a reception committee. …

The watercourse veterans left Mauch Chunk … and took turns taking their mule down the canal, as they had in their youth. You stay here until the next one [week]when to start the return journey.

TO SEE MORE OF LEHIGH VALLEY THEN:

Steve Novak can be reached at [email protected]