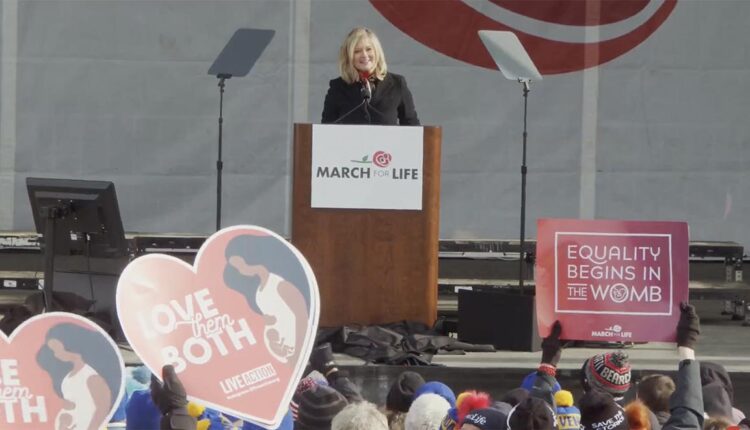 WASHINGTON (RNS) — Thousands of people gathered on the National Mall Jan. 21 for the March for Life, an annual anti-abortion rally that took on a cautiously triumphant tone as participants looked forward to an upcoming Supreme Court ruling .

Court observers say Dobbs v. Jackson has the potential to take down Roe v. Wade and return control of abortion legislation to the states.

The speaker lineup for this year’s event, themed “Equality Begins in the Womb,” included an unusually strong group of elected officials, mostly Republicans.

Senior officials like former President Donald Trump have spoken at the rally in the past, but this year organizers opted for a wide array of lawmakers.

One of the first presentations at the rally was a video featuring more than a dozen pro-abortion senators, including Mitt Romney, Mitch McConnell, Shelley Capito, Mike Lee, Marsha Blackburn, Chuck Grassley, Ted Cruz and Rand Paul.

“We believe that everyone is equally loved by God and should be protected equally,” Senator James Lankford said during the video. “That’s why we’re not giving up. That is why we march for life.”

The Oklahoma senator — a Southern Baptist pastor — was also one of about 20 lawmakers who appeared onstage at the event, along with Rep. Dan Crenshaw, Marjorie Taylor Greene, Andy Harris and Mike Kelly, among others.

Representative Julia Letlow of Louisiana, who worships at a church affiliated with the Evangelical Presbyterian Church, addressed the crowd directly in a speech. When she was pregnant with her first child, she said she used to pray, reciting Jeremiah 1:5: “Before I formed you in the womb, I knew you. Before you were born I separated you.”

“I believe the Lord makes that promise for each of us, and every soul is precious in His sight,” she said.

Optimistic about the upcoming decision

She expects a “monumental decision” from the judges this summer, she said, and thanked the crowd for their “faith and perseverance” in standing up for abortion.

Enthusiasm for the upcoming Supreme Court decision was a constant theme among attendees. Gabriel Clyde, who traveled to Washington with a group affiliated with the Wesleyan Methodist Church from New Bethlehem, Penn., said he had been attending the march for years because of his faith.

“This is an exciting year,” he said. “This summer case is huge. We’ve spent a lot of time praying about it and having faith that things will change.”

While politics is always a common theme at the March for Life gathering, this year attracted some extreme variants. Patriot Front members marched near the rally and distributed flyers to March for Life participants while police escorted them. The white nationalist group has taken part in anti-abortion protests in the past, though their arrival has frustrated organizers.

When asked about the presence of hate groups, representatives of the March for Life presented a statement from Jeanne Mancini, the group’s chair.

“March for Life promotes the beauty, dignity and worth of every human life as it works to end the violence of abortion,” the statement said. “We condemn any organization that tries to exclude any person or group of people because of their skin color or any other characteristic. Such an exclusion contradicts our mission, which recognizes that all human lives are equal from the moment of conception: equality begins in the womb.”

Footage posted to social media showed opposition from at least some March for Life participants. In one clip, a person can be heard shouting, “You ruined our march!” as members of the Patriot Front marched near the rally, surrounded by police.

Other aspects of the event were more typical of previous years, such as the presence of religious leaders and activists, especially Catholics.

Sister Veronica Marie of the Dominican Sisters of Mary, Mother of the Eucharist, said she and her Catholic group traveled from Ann Arbor, Michigan, to express their belief that “life is beautiful and a gift from God.” She also said her prayer life has “increased” in recent weeks, explaining that the upcoming Supreme Court case has given her specific reason to pray.

Brother Patrick Joseph of Massachusetts was similarly hopeful about the upcoming verdict but said it would not affect his anti-abortion work.

“From a sporting point of view: I think you have to work through the fourth quarter. If this is the fourth quarter and we’re at the two-minute warning for this quarter, we have to do our best to make sure it’s successful,” he said.

The Catholic Church has long been opposed to abortion, but US Catholics remain divided on the issue. According to the Pew Research Center, a majority of Catholics (55 percent) say abortion should be legal in all or most cases. Similarly, a 2019 Pew poll found that a solid majority of Catholics (68 percent) do not want the Supreme Court to see Roe v. Wade falls.

The views of such Catholics were visible when the Catholics for Choice group protested in front of the Basilica of the National Shrine of the Immaculate Conception. The group used a projector to shine pro-abortion messages on the side of the basilica while anti-abortion activists held a vigil inside.

A majority of black Protestants (64 percent) and non-evangelical white Protestants (63 percent) say abortion should be legal in all or most cases, according to Pew.

But there was one outlier among major faith groups in Pew polls: white evangelical Protestants, of whom more than three-quarters (77 percent) believe abortion should be illegal in all or most cases by 2021.

They include actor and conservative activist Kirk Cameron, who was promoting his upcoming adoption film Lifemark at this year’s March for Life while speaking out against abortion.

“Why are we here? The Bible, the book that built America, says those who hate God love death,” he said. “But we are the family of faith. We love God, so we love life. And our hope is not in the White House, not in Congress. … our hope is in the power of God at work in the hearts of his people.”

As for the upcoming Supreme Court ruling, some visitors to the National Mall were careful to dampen their enthusiasm. When asked whether Roe v. Wade might be crushed, Joseph’s tone was cautious.

“We hope this will be the last,” he said, referring to the March for Life. “But if not, we’ll be back next year.”