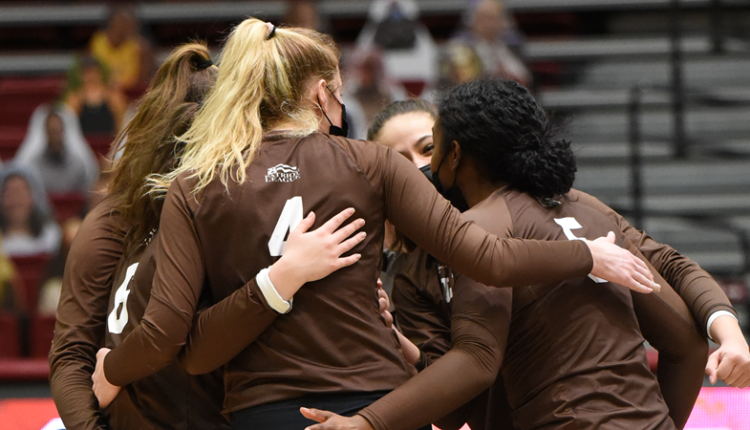 BETHLEHEM, Pennsylvania – Five new faces will hit the field this fall as head coach Alexa Keckler and her coaching staff officially announced their new class for newbies ahead of the 2021 season.

Last spring, an atypical influx of talent came to Leeman Turner Arena at Grace Hall. In fact, there were six newbies last year, bringing the total subclasses to 11 of the 17 student-athletes on the list this fall.

This year’s incoming freshman class includes two outside hitters, a middle blocker, a setter, and a libero / defensive specialist who will meet all of the positional needs for the new campaign.

A variety of states are represented in this new class with players from Florida, Idaho, Maryland and a local from Bethlehem.

The Mountain Hawks ended the shortened spring season a few months ago with 3-6 and, after qualifying in 2019, missed the field of the four-person Patriot League tournament for the first time in Keckler’s tenure.

Brown, a local product of Bethlehem, Pennsylvania through Bethlehem Catholic High School, becomes the first recruit to the area’s head coach Alexa Keckler. A libero by profession, she is one of the best in the state and received all-state honors from the PIAA in 2019 and 2020, including all-EPC first-team honors every four years in 2019 and 2020. As captain of Becahi, Brown led the Golden Hawks to a PIAA Class 3A State Championship in 2020-21, and also led their team to a District XI Championship and an East Penn Conference title. She was named Volleyball Player of the Year and Becahi’s Sportswoman of the Year by Lehigh Valley Live. In the classroom, Brown was a member of the National Honors Society, Student Athlete Character Council, Key Club, and a sophomore student council representative. Outside of high school success, she was on the Synergy, AVA, and East Coast Power club teams throughout her volleyball career.

Kiser hails from Tampa, Florida, from Tampa Preparatory School to Lehigh, where she ended a dominant career that took her team to the District Semifinals. She counted 259 kills with a hit rate of 0.417 in 2020-21. Last season, Kiser received a number of awards for her achievements, including the Kirkwood Family Outstanding Volleyball Player Award and Tampa Prep Sportswoman of the Year. In the classroom, Kiser did the honors each school year and won the Tampa Prep Music Accolade Award for the 2019-20 school year. At the club level, she has played for the Tampa Elite, St. Pete volleyball club and was a member of OTVA’s OT Dexter roster for the AAU Nationals in 2021.

Schulte is an exciting addition to the Lehigh program based in Boise, Idaho. On the pitch, she was a First Team All-Conference award winner last season and had her 2019-20 breakout year, where she received the First Team All-State Honors as well as the Southern Idaho Conference Player of the Year. In that impressive junior season, Schulte counted 480 kills, 206 digs, 49 blocks, 40 service aces, and hit at a rate of 0.266, which led Timberline to the state playoffs. In the classroom, she was a member of the National Honors Society and a member of the Honor Roll for four years. Schulte was a member of the Idaho Crush Volleyball Club in Boise.

Full of awards and successes both on and off the field, Smith travels from Annapolis, Maryland to Lehigh via Broadneck High School. In her first season in 2017, Smith was selected by the Capital Gazette as the starting player in the Team All-County second pick. In 2018, she received First Team All-County awards from Capital Gazette and Anne Arundel Counties, including First Team All-Metro from the Baltimore Sun. Smith was Broadneck’s sophomore captain, earning MVP honors and a spot on the AVCA Phenom list. Smith led her team to second place in the Class 4A State Championship in 2019 and received First Team All-County and First Team All-Metro awards for the second year in a row. In 2021 she received the four-year letter prize. Smith ended her high school career as Broadneck’s all-time leader on assists and blocks, including the single season record holder for assists and blocks. In the classroom, she was a member of the Student Athletic Leadership Council for three years.

Stewart begins her college career in hopes of becoming the next major mid-blocker to survive the Lehigh program. She’s got off to a great start after a stellar high school career in Fort Myers. In 2019 and 2020, she was named News Press Volleyball Player of the Year and a member of the News Press First Team for two consecutive years. She also received the LCAC All-Conference Awards in 2019 and 2020, and was recognized on the Under Armor All-American Watch List in 2020, where she also received the AVCA All-Region Awards. She received the Scholar Athlete Award and Unsung Hero Award from Fort Myers in 2020 and is the school record holder for the most blocks in a match (12). As the captain of her high school roster, Stewart was an eight-time MaxPreps Player of the Game, a member of the Prep Volleyball Watch List in 2021, and a member of the AVCA Phenom List. In the classroom, Steward graduated summa cum laude in the IB program, where she was also a member of the Honor Roll for four years. As a member of the National Honors Society, Stewart received an AAU Academic All-American Selection in 2019 and 2020.