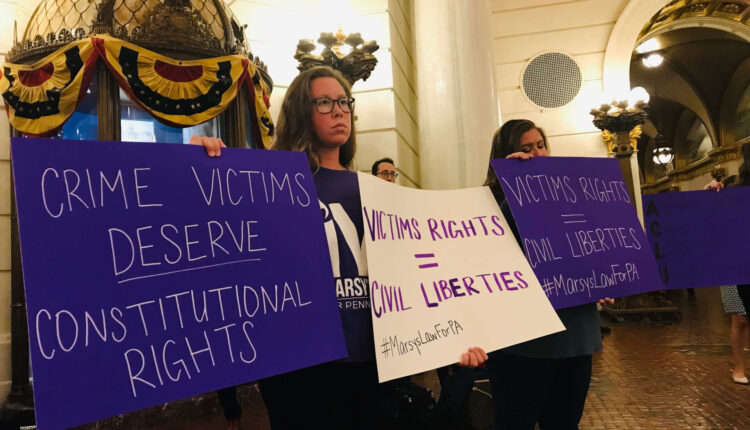 After appearing on the ballot nearly two years ago, a constitutional amendment for victims’ rights went before the state’s highest court on Tuesday.

The Pennsylvania Supreme Court heard oral arguments about whether the Marsy’s Law amendment, which appeared on the 2019 general election ballot, should have been presented in separate questions. Unofficial election results show that voters approved the referendum. However, it has yet to take effect due to ongoing litigation that argues the ballot question introduces too many changes to the state constitution at once.

Marsy’s Law is part of a national advocacy movement backed by a billionaire tech executive. Seventy-four percent of Pennsylvania voters approved it in the Nov. 2019 municipal election, following an expensive advertising campaign. The Republican-controlled General Assembly approved the language for the ballot question in near-unanimous votes in 2018 and 2019.

Ahead of the 2019 election, the League of Women Voters of Pennsylvania filed a lawsuit against the state’s top election official, with support from the American Civil Liberties Union. In response, the state Supreme Court ruled that votes for the change would not be counted until the legal proceedings were complete.

In January, a state appellate court ruled 3-2 that the Marsy’s Law amendment was unconstitutional and invalidated referendum votes because the question violated a constitutional provision that limits individual ballot questions to one subject.

Mary Catherine Roper, a staff attorney with the ACLU, argued that the 15 changes are not sufficiently interrelated to be considered one objective. The ACLU and League of Women Voters of Pennsylvania also have argued that the language for the ballot question is vague and that it “undermines the rights of people who are accused of crimes.”

“The state constitution gives the people of Pennsylvania the power to amend that document,” Reggie Shuford, executive director of the ACLU of Pennsylvania, said in a statement. “It also ensures that voters cannot be overwhelmed with too many changes at once, proposed by an overzealous Legislature. This case is about the right to vote, specifically the right of the people to consider multiple changes to the constitution as separate questions on which to vote. Instead, state lawmakers gave the voters a single choice — yes or no — on more than a dozen changes to the constitution.”

David Pittinsky, who represents the four voters who want to see the votes counted and the constitutional change take effect, argued that all 15 amendments pertain to victims’ rights. The ballot question, he said, gives victims of crimes equal rights to those who are accused.

“The important thing about Marsy’s Law is giving victims a voice in the criminal justice system,” Jennifer Riley, state director for Marsy’s Law for Pennsylvania, told reporters after oral arguments. “We have a legal argument that took place today, but what we don’t want to lose sight of is the fact that crime victims deserve to have a voice here in this state. And it’s all hinging upon whether or not crime victims should have constitutional rights in Pennsylvania.”

Pittinsky said the state Supreme Court could decide on the case by the end of the year.