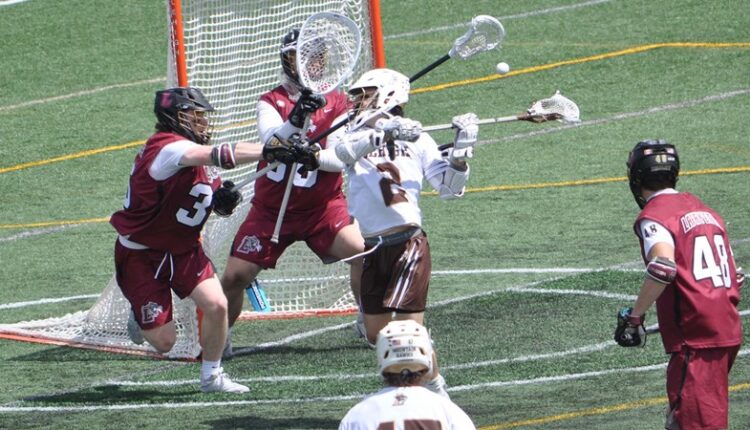 No. 7 Lehigh Clinches Top Seed in PLT with 14-11 Win Over Lafayette

BETHLEHEM, PA. – The # 7 Lehigh men’s lacrosse team held a lively Lafayette squad on Sunday, winning 14-11 for their second win over the Leopards in three days to finish number 1 in the Patriot League next month Competition. Junior Mike Sisselberger was history again. He won 23 of 27 fixtures with a program and a record of 21 groundballs, breaking his own record set two days earlier at Lafayette. With 8-0 in the season and 7-0 in the league, the Mountain Hawks made their best start in program history, while their seven wins in the Patriot League are also a program record.

“Today was a strong rally for us,” said Lehigh head coach Kevin Cassese. “Mikey Sisselberger has won so many faceoffs and collected so many groundballs. It was really impressive to break his own record. Honestly, we needed him today. I thought Lafayette did a great job of keeping the fight on both ends of the line To bring the field to us. ” I thought in many ways they outperformed us.

“We really needed our Faceoff unit to get to the point, and luckily they were,” Cassese continued. “They gave us a lot more possessions than Lafayette and we got a few more games to play than them. Our faceoff unit was definitely the star of the game.”

The win marked the 116th program record in the 14-year career of Lehigh head coach Kevin Cassese when he turned John McCloskey into sole ownership of first place in career wins.

“I’m obviously excited to take the win,” said Cassese. “I can return to my core values, and my core values ​​come from my parents. In particular, I remember my mother telling me as a child that anything worth doing is worth doing right would be lying if I said it wasn’t on my radar.

“Very grateful that as a young kid, 26 years old, Lehigh shot me in the first place and allowed me to become head coach,” continued Cassese. “Then I’ll be true to myself and I have the feeling that I stayed true to them again. Without the people around me (players, assistant coaches, administrators, etc.) I would certainly not be able to do this. I feel very grateful and definitely happy but more excited to go forward and get 117. ”

Sunday was also Senior’s Day as the Mountain Hawks class (consisting of nine seniors and four fifth year seniors) was recognized before the game.

Sophomore Christian Mule ‘led the offensive with four points over three goals and one assist. Graduate student Andrew Eichelberger scored three goals for his first hat trick of the season and the fourth of his career.

After Lafayette had even drawn 2:31 in the competition, the Mountain Hawks responded with the next six goals. Two of the goals were scored by Mule, including one behind the back when Lehigh took a 7-1 lead in the middle of the second quarter.

Christian Mule ‘with the beauty behind his back in the first half! pic.twitter.com/XmOf1Ye5Hi

As on Friday, the leopards replied. Lafayette scored six of the next eight goals and scored within 9-7 after a man-up goal in the middle of the third quarter. Sisselberger’s fourth goal of the season made for a 3-1 Lehigh run when Junior Cole Kirst’s Senior Kevin Gersbeck gave the Mountain Hawks a 12-8 lead over fourth.

The Leopards had another run in themselves, coming within 12-11 with more than nine minutes left, but graduate student Crew Cintron scored a big goal at 8:21, then Eichelberger ice cream his third game in the final Minutes, good for the 14-11 final.

The final shots were 48-28 in Lehigh’s favor, while the Mountain Hawks had a 40-31 lead on groundballs. Senior James Spence made 10 saves against Ryan Ness of Lafayette, who made 14.

“I thought our shooting was below average today,” said Cassese. “I think part of that was due to their goalkeeper and I think part of it was due to our lack of focus in shooting. I felt like there were points where we could have inflated the game wide and ours lack of attention to detail. ” Our shooting didn’t allow us to do that. It allowed Lafayette to stay there and make it a really close game in the end. “