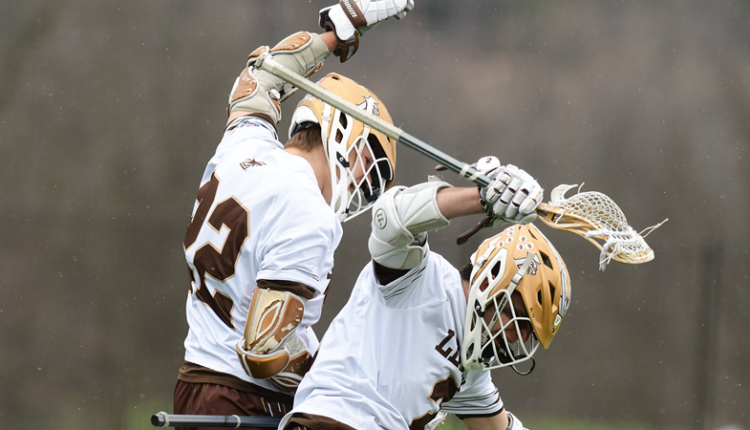 BETHLEHEM, Pa. – The No. 19 Lehigh men’s lacrosse team returns home after a pair of road games, both victories, to host Bucknell on Sunday in a big Patriot League matchup. Gametime is set for 1 pm on CBS Sports Network. The Mountain Hawks picked up wins of 12-10 then 14-7 at Binghamton and Lafayette, respectively, to improve to 6-3 on the season and 4-0 in league play.

Most recently, Lehigh used a 6-0 fourth-quarter run to turn a one-goal lead into a seven-goal victory. In that stretch was a 50+ yard goal from senior Judah Hicks, his first-career goal, to give the Mountain Hawks a 12-7 lead. Senior Tommy Schelling led the offense with five points for a second straight game via two goals and three assists. That upped his career assist totally to 72, now good for the seventh in program history. Senior Matt Marker, junior Christian Mule’ and sophomore Scott Cole also scored two goals apiece. Defensively, graduate student Teddy Leggett recorded seven groundballs and two caused turnovers, in the process, moving from fifth to fourth in program history for career groundballs (243). Over his last three games, he posted 19 groundballs and nine caused turnovers, with 25 groundballs and 14 caused turnover over his last five. Senior Michael Gomez also recorded three groundballs and two caused turnovers on Saturday.

Graduate student James Spence impressed in goal, making 13 saves – 12 over the final three quarters. That gave him exactly 600 for his career, as he became just the seventh goaltender in Patriot League history to reach that milestone.

In the end, Lehigh extended its program-record win streak against Lafayette to 13 and improved to 21-1 over its last 22 meetings in the series. It was the Mountain Hawks’ 15th straight win over a Patriot League opponent dating back to 2019. Lehigh will hope to make it 16 on Sunday, but it won’t be easy, as the Mountain Hawks host a 7-3 Bucknell team that began the season 5-0. The Bison are 1-3 in the league, but have a big nonleague win over Penn State.

The Bison began the year 5-0 before a 12-7 loss at Boston University. Bucknell responded with a big 12-11 win over Penn State, then has dropped games at Loyola (13-9) and home vs. Army West Point (10-9) with a 14-6 win against Colgate sandwiched in between. The Bucknell offense is led by first year Connor Davis with a team-leading 35 goals and 40 points. Dutch Furlong (25 goals, 11 assists) and Alston Tarry (21 goals, 12 assists) are over 30 points. Four Bison have tallied double-figure caused turnovers, led by Reid Delanois’ 15. Nick Crovatto leads the team in groundballs (68) while winning 53.1 percent of his faceoffs (110-of-207) and tallying three goals and seven assists. Reigning Patriot League Rookie of the Week Rich O’Halloran leads the team in saves (58) and has posted a 9.57 goals against average and 58.6 save percentage.

Lehigh won both meetings last season (18-6 and 18-12) to pull within 38-17 in the all-time series. The Mountain Hawks have won seven of the last 12 vs. the Bison, which includes going 4-2 at home during that stretch. In that stretch were two Patriot League Tournament meetings – a Lehigh win in the 2013 championship game and Bucknell victory in the 2015 quarterfinals (with both teams winning at home). The sides first met in 1969, a 14-1 Bucknell victory. Bucknell won 15 of the first 16 all-time meetings.

Following Sunday’s game, the Mountain Hawks will hit the road on Saturday, Apr. 16 to face Colgate at 4 pm

Come on out and grab a team poster at Sunday’s home game vs. Bucknell! pic.twitter.com/YOemhccz1r