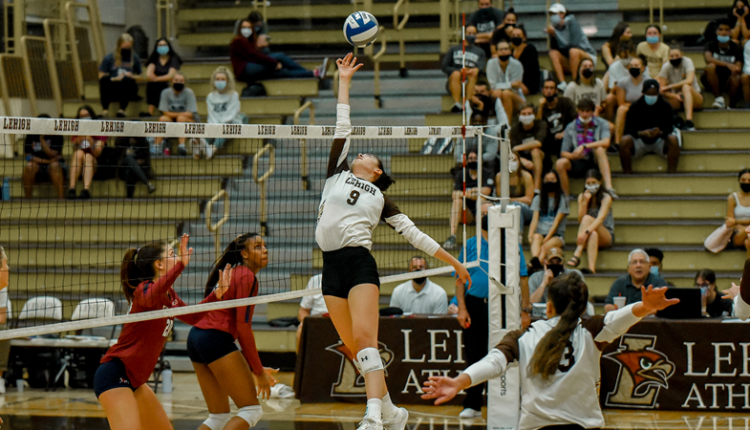 BETHLEHEM, Pennsylvania – The Patriot League game officially begins this weekend for the Lehigh volleyball program, while the Mountain Hawks (3-7) face Colgate on Friday night at 7 p.m. and Army West Point on Saturday night.

For Lehigh, it was a fatal combination of freshman Megan Schulte, 18, and fifth grader Hannah Wright, 15, who scored 33 of the team’s 61 kills that evening.

The Mountain Hawks beat .191 as a team this season, good for first place in the Patriot League. Lehigh got a total of 11.4 kills per set.

Colgate, the spring regular season champion, is 3-6 to open the 2021 season. The Raiders have won two games in a row, both at the Ellis Rowland Memorial Tournament at Cotterell Court in Hamilton, beating Cleveland State in straight sets on Saturday in the opener and Hofstra 3-1 in the nightcap.

Lehigh will be Colgate’s first Patriot League opponent of the season on Friday, closely followed by a 4pm game against Lafayette on Saturday.

Abby Shadwick leads the team with 65 kills, followed by Libby Overmyer with 64. Julia Kurowski has 252 assists to speed up the Raiders, while Sophia Thompson has 42 blocks and Taylor Cigna has 97 digs.

Colgate leads the all-time series against Lehigh, 45-19. The Mountain Hawks have dropped seven consecutive meetings and haven’t won against the Raiders since September 22, 2017.

The defending champions of the Patriot League, Army West Point, got off to a strong start to the new season and already set a 6-3 record in their first nine games. As part of the Jack Kaiser Classic in Queens, the Black Knights won 2-1 with one win over Fordham and two losses to Boston College and hosts St. John’s.

Savannah Bray leads the Army with 91 kills, while Paige Fixemer has 87 and Cate Buckingham has 82. Buckingham also leads with an attack percentage of .274. Diana Etheridge has 306 assists, averaging 9.27 per set, while Fixemer has 33 blocks and Sayler Butters has 142 digs.

Army West Point holds an all-time 42-16 record against Lehigh and has won seven of their last eight matchups, including three in a row. The Mountain Hawks last defeated the Black Knights on September 28, 2018 in five sets.
The Friday night game in Colgate will be streamed live on ESPN +. Live statistics are provided against the Army on both Friday and Saturday.