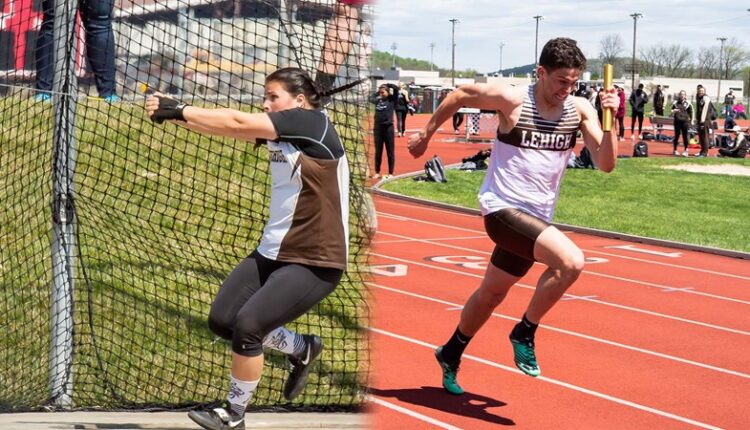 BETHLEHEM, Pa. – For the first time in nearly two full years, the Lehigh men’s and women’s athletics teams competed at the Goodman Track and Field Complex. On a sunny Sunday afternoon, the Mountain Hawks won a total of 16 events between men and women. The other schools that attended the Lehigh Spring Opener today were Colgate, Lafayette, UMBC, and Wagner.

On the women’s side, the ladies won 10 events throughout the day. Teasha McKoy and Brittany Curtin started the field events and both showed power for the browns and whites. McKoy won the shot put at 12.17 m (39’11.25 “) while Curtin took home the dub in the hammer throw at 51.10 m (167’8”). With a score of 42.14 m Curtin was also second in the discus. Veronica Meyer stayed with the discus and came third with 41.05 m.

In the long jump, Maddy Harding was second with a mark of 5.33 m, while Rachel Sequeira was third with 5.20 m. Sequeira took second place in the triple jump on 11.67 m, while newcomer Nina Cialone took third place on 11.13 m.

In the 100mH, Brett DeWeese scored another victory. The senior won with a time of 15.42 while Ashley Griesmeyer finished second with 15.75. In the 3000 m obstacle course, sophomore Andrea Miller finished second with 11: 34.54. Miller won until the last lap of the race. Alexis Smith was born on November 26th. Second on the 200m.

Lehigh won a total of six events on the men’s side during the day. One of the stars on Sunday was Ian Scott, who scored two individual victories in his second year and took first place in the high jump. Scott’s long jump of 6.62m earned him victory in that event, while he won the triple jump with a record of 14.28m. In the high jump, Scott and Brittann Pierce finished first with markings at 1.95 m. Both men tried the mark at 2.00 m, but could not pass.

Jeffrey Kirshenbaum won the 5000 m run with a time of 15: 07.50. Nick Wilson was second behind Kirshenbaum with 15: 13.62. Michael Nardelli secured another win for the Mountain Hawks in the 110mH. The junior time of 15.53 beat the field, while newcomer Daniel Stipanov finished second with 15.95, just behind Nardelli. In the obstacle race, Nick Norton and Avery Lederer dominated the race. Both men paced back and forth, but a late stumble by Lederer gave Norton the victory. Norton’s time was 9: 34.99 while Lederer finished second in 9: 37.98.

Samuel Tapera rounded off the afternoon for Brown and White, finishing third on the 100m with a time of 11.31 while Amondo Lemmon finished the day third on the 400m with 50.98.

Next, Lehigh will travel to Easton for the Lafayette Invitational next Saturday.