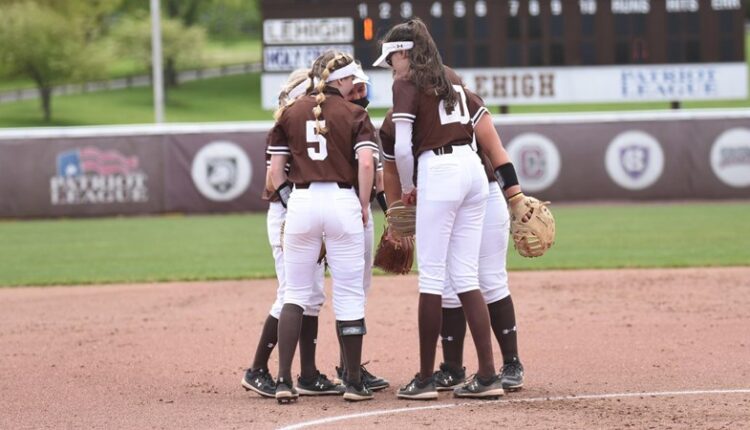 BETHLEHEM, PA. – Lehigh, who has won eight games in a row at the end of the regular season, is traveling to Boston for the 2021 Patriot League softball tournament, which is scheduled to take place Thursday through Saturday at BU Softball Field. Boston University is the two-time title holder and host for the third year in a row.

Lehigh has won the league’s top 14 tournament titles, most recently in 2017, and reached the finals in 2018 and 2019. The Mountain Hawks took two from Bucknell on April 25, two from Holy Cross on May 2, and four from Lafayette last weekend, closing the regular season with 16-14 overall and 14-8 in the league. The second seeded Mountain Hawks open the double elimination tournament against Colgate with the third seed. The No. 4 Seed Army West Point will open the tournament against the host and Top Seed Boston U.

According to Boston University’s guidelines for on-campus visitors, spectators are not allowed to attend sporting events during the spring semester. For outdoor facilities of BU Athletics, this restriction includes all areas around the venue. Please note that all visitors who gather to watch an event will be asked to leave the area by the game management staff.

Four Mountain Hawks were recognized when the Patriot League announced their postseason awards earlier this week. The junior shortstop Carley Barjaktarovich received a major award when she was named Defensive Player of the Year. Barjaktarovich has a fielding percentage of 0.974 and made 39 putouts and 74 assists during the regular season. Junior outfielder Jaelynn Chesson and junior pitcher Gabriella Nori were appointed to the first team of the All-Patriot League. Barjaktarovich was named the second team of the All-Patriot League along with Karsen O’Rourke, the second junior baseman.

While this shortened 2021 season included fewer games than normal, junior outfielder Jaelynn Chesson has managed to put together one of the best offensive seasons in school history. In just 30 games, Chesson beats .426 with 16 doubles, eight home runs and a whopping 50 runs. She leads the Patriot League in doubles, home runs and RBIs and leads the nation in RBIs per game (1.67). Chesson ranks ninth in doubles nationwide and fourth in doubles per game (0.53). If you knock out the two players who only played three games this season, Chesson takes second place in doubles per game. Chesson’s 50 RBIs are six years behind Kim Miller’s school record in 1995. Miller set the record of 56 in 50 games. Chesson received her second career as the first team in the All-Patriot League. Much of Chesson’s production has been impressive. In eight of Lehigh’s 16 wins (and seven of his 14 league wins), Chesson delivered the game-deciding or ultimately game-winning RBI.

Led by juniors Jaelynn Chesson and Carley Barjaktarovich, the Mountain Hawks were propelled by a massive offensive attack that ranks second in most categories behind Boston University. Lehigh beats .314 as a team and has scored 160 runs in 30 games. The Mountain Hawks lead the Patriot League and rank seventh nationwide in doubles per game (1.83).

Lehigh and Colgate will meet for the second game on Thursday at 2:30 p.m. The Mountain Hawks and Raiders meet in the postseason for the first time since 2013, when Lehigh beat the tournament’s opening game 3-1. That year Colgate won three of Lehigh’s four games at Eaton Street Field in Hamilton, New York. The Raiders went seventh at the start of the series, while Lehigh scored nine runs in seventh to win the third game.

Colgate finished the regular season 15-13-1 overall and 13-9-1 in the league. The Raiders took a 1-1 lead at Bucknell on the last weekend of the regular season. Four raiders: Morgan Farrah, Kara Fusco, Adrienne Nardone and Steph Jacoby won the second team’s laurels. Bailey Misken was the Raiders’ top pitcher at 6-6 with an ERA of 2.34 in 89.2 innings.

The other first round games on Thursday will face Boston University No. 1 and Army West Point No. 4. The Terriers won the other four Patriot League top prizes, led by three-time pitcher of the year Ali DuBois. BU recorded a 33-2 regular season with a 21-1 league mark. The Lone League loss came to the Army entering the postseason at 16-15 overall and 12-10 in the league. DuBois anchors a pitching baton that leads the nation with a 1.07 team ERA. Boston University defeated a double header in Lehigh on March 27th. The last two games in the series were rainy. Lehigh and Army split a home and home series of four games on April 3rd and 4th.

The Patriot League tournament begins Thursday with the Boston University Army’s West Point game at 12 noon. Lehigh and Colgate line up around 2:30 p.m.
Three games are scheduled for Friday, with the winner’s bracket game scheduled for 11 a.m. and the qualifying games for 1.30 p.m. and 4 p.m. The championship round with game six and possibly game seven is scheduled on Saturday at 11.00 a.m.

The streaming video of all promotions from the Patriot League tournament will be available on ESPN +.