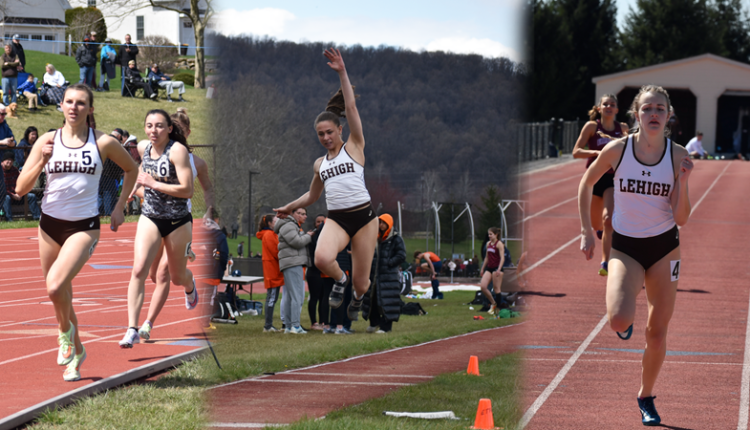 Lehigh continued to show improvement on the track, finishing with four first-place finishes and 12 PRs. In the steeplechase, first-year Savanah Beavers earned her first college win. Beavers finished first with a new personal record of 11:30.25. Sophomore Grace Kolbe finished third with a PR of 11:52.97.

Senior Jamie Zamrin continued to finish with impressive times, making her final season at Lehigh count. Zamrin won the 1500m with a new PR of 4:41.17. Sophomore Andrine Larsen finished fourth with a personal record of 4:52.65.

On top of the steeplechase and 1500m, the Mountain Hawks went on to win both the 800m and 200m. Senior Julia Dorley is continuing to show improvement on the track, winning the 800m with a new personal record of 2:12.34m. First-year Riley Morrell was the second Mountain Hawk to earn a PR in the 800m on Saturday, finishing with a time of 2:23.33.

Sophomore Jordyn Hock has been unstoppable since the indoor Patriot League Championships and is showing no signs of slowing down. Hock won the 200m with a PR of 25.34. Junior Ashley Griesmeyer also finished the 200m with a new personal record of 27.16

Cunningham and Griffin were members of the second-place 4×100 relay team who finished with a time of 48.56. The duo ran alongside sophomore Ashley Struck and first-year Stephanie Webb.

The Mountain Hawks found success in the throws at the Goodman Track and Field Complex on Saturday. Seniors Teasha McKoy and Veronica Meyer led the throws group with several top three finishes. McKoy won the discus with a new personal record of 48.99m while Meyer finished second in the hammer throw with a personal record of 50.74m to become ninth all-time.

Lehigh’s first-year duo finished with solid marks in the pole vault as well. Randi Conroy finished second with a mark of 3.70m and is now tied for second all-time. Casey Talamini-Kelemen tied her PR of 3.40m in her eighth-place finish.

The Mountain Hawks will compete in two meets next weekend. While some student-athletes will head to Lewisburg to compete in the Bison Outdoor Classic, others will remain in Bethlehem to compete at Moravian’s Greyhound Invitational.