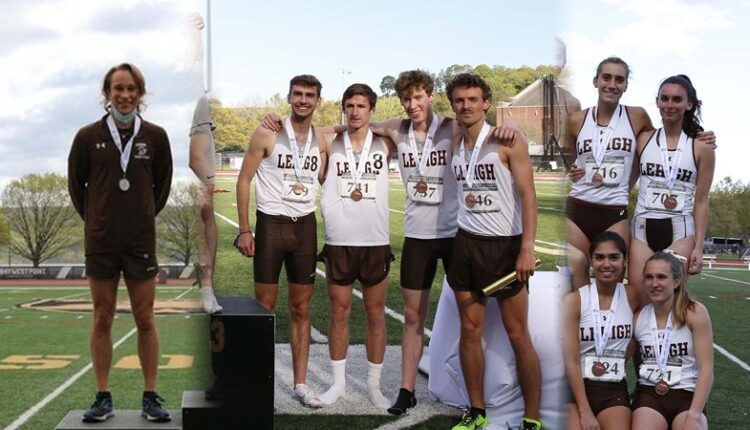 WEST POINT, NY – The Lehigh men’s and women’s track and field teams completed day one of the Patriot League track and field championships at a high level in 2021, gaining momentum for tomorrow’s second and final day. The day ended with the Mountain Hawks taking two bronze medals in the 4×800 for men and women. The men’s team is currently third out of seven schools with 15 points, while the women are currently fifth with five points. There are still a lot of points to be won for the Brown and White on Saturday.

Going back to the final sections of the first day, both Lehigh 4×800 relay teams thrilled the crowd with impressive races in a row. The men’s team of Joseph Cranley, Brian Healy, Brandtson Duffie and Jacob Martinez took third place with a time of 7: 59.69. In the third leg of the race, Duffie really broke it open for the Mountain Hawks while Martinez was able to hold onto third place. In the women’s category, Lehighs Hetty McMillan, Jade Sessions, Miranda Royds and Carly Friend took bronze with a time of 9: 09.30. McMillan paced up and down after the first two laps, giving Lehigh the lead while Sessions maintained the lead for four laps. Late pushes from the Army and Navy were enough to overtake the Mountain Hawks in the final laps.

Not only did Lehigh end with a bang, but they also started with a bang. The late push from Senior Jeffrey Kirshenbaum in the last three laps of the 10K run gave him a silver medal (30: 31.33). The entire field was in a pack for most of the race until the leaders broke off with seven laps to go. Michael Mitchell and Brad DeMassa finished seventh and eighth for the Mountain Hawks. Mitchell came in with a time of 30: 57.36 while DeMassa recorded a time of 30: 58.08. Jamie Zamrin struggled through injuries and set a time of 38: 01.33.

Look at that smile !! A late push in the last mile threw Kirshenbaum past his opponents for Go # GoLehigh pic.twitter.com/TEzzsCFEEP

At the field events, Riley LaRiviere and Anastasios Mouzakis put on a hammer throw show. LaRiviere was fifth with a score of 55.14m while Mouzakis was ninth with 51.72m. The men weren’t the only ones who were successful in the hammer throw, as the senior Brittany Curtin (52.91 m) and Teasha McKoy (48.89 m) finished sixth and 10th. The Brown and White also had great success in the spear with Brianna Wanbaugh and Karina Roze. Wanbaugh’s score of 40.78 earned the Mountain Hawks two points and a seventh place, while Roze finished ninth with 38.77. In the heptathlon, Maddy Harding is currently in fifth to fourth place with a score of 2,902 points and only nine points away from third place. Harding finished second in the 200m (26.10) and third in both the 100mH (14.88) and the shot put (10.57). Bree Smentkowski is currently eighth with 5,577 points. Smentkowski was fifth (10.38 m) in the shot put and sixth (26.98 m) in the 200 m

For most of the day, most of the events ran in the heats and tests to get to the finals for tomorrow. In the 1500 m run, Sean Brown, the reigning champion, qualified for tomorrow’s final after finishing third in his run with a time of 3: 57.88. Natalie Condon and newcomer Christina Yakaboski also qualified for the women’s 1500 m. Condon qualified in 4: 41.39 while Yakaboski’s time was 4: 48.00. In the 110mH, Michael Nardelli continued his outstanding season by reaching tomorrow’s final after a time of 3:12 p.m. Brett DeWeese continues after recording a time of 14.61 in the 100mH.

PRs FROM DAY ONE OF THE PLC

Two people injured when a van overturned in Bloomsbury

The 20 colleges most hostile to LGBT students