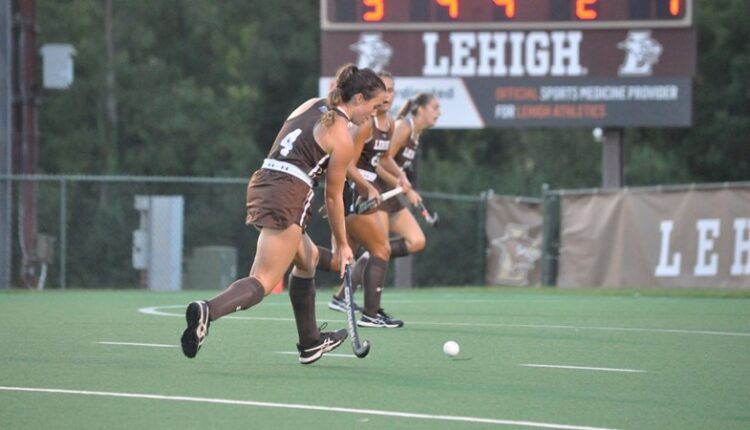 BETHLEHEM, Pa. – Junior Abbie Brown scored twice and first-year Maddie Kandra scored her first career goal to lead the Lehigh field hockey team to a 3-2 victory over La Salle Friday night at Ulrich Field. The Mountain Hawks answered La Salle’s opening goal with two goals in the second quarter and one in the fourth to post their first victory over La Salle since 2011 in a series filled with one-goal games.

Friday’s result leaves both teams at 3-2 on the season.

“We have been in a lot of close games against La Salle and we talked about the history in the last several years of not being able to come out on top and we were really motivated to continue to prove that we can move the program in the right direction,” Lehigh head coach Caitlin Dallmeyer said. “I feel like that today was a very good opportunity to do that and to do things that we haven’t been able to do and accomplish in a long time and I’m really thrilled that we were able to competitively outwork them in critical moments in the game.”

The visiting Explorers opened the scoring 7:15 into the game when Tatum Johnson took a pass from Malena Balduzzi and scored her fourth goal of the season off a penalty corner.

Lehigh tied the game following a corner just under two minutes into the second quarter as Brown deflected in junior Lotte Smorenburg’s shot for her first goal of the season. Nearly three minutes later Brown took a pass from senior Sarah Bonthuis, dribbled into the circle and beat La Salle keeper Ryan Curley with a shot to the far post.

“Abbie is in an interesting role right now,” Dallmeyer said. “She is being bounced around to a lot of different positions. She’s one of our most versatile athletes, in that I can put her a center back, I can put her at center forward and it could happen in the same game depending on where she’s needed. She’s been working on getting more comfortable in the forward-role and so tonight was really validating the work she’s been putting in at practice, shining through in some stats.”

The game remained 2-1 for Lehigh into the fourth quarter. With just under four minutes remaining, Bonthuis dribbled into the top of the circle and fired a shot that was deflected in by Kandra to give Lehigh a 3-1 lead.

Peyton Tollaksen brought La Salle within one 37 seconds later as she scored off a scramble in front of the goal cage following an Explorer corner. Lehigh used a strong possession game and solid defense to kill the final three-plus minutes off the clock.

3⃣ goals and a home win for the Mountain Hawks! pic.twitter.com/qvuQBvlxhx

Shots finished 17-8 in Lehigh’s favor including an 8-5 edge in shots on goal. The Mountain Hawks also had a 10-5 advantage in penalty corners.

Senior Maddie Kahn made three saves for Lehigh while Curley made five for La Salle.

The Mountain Hawks will host Wagner on Sunday in their final game before Patriot League play begins next weekend. Game time is set for 11 am with streaming coverage on ESPN+.