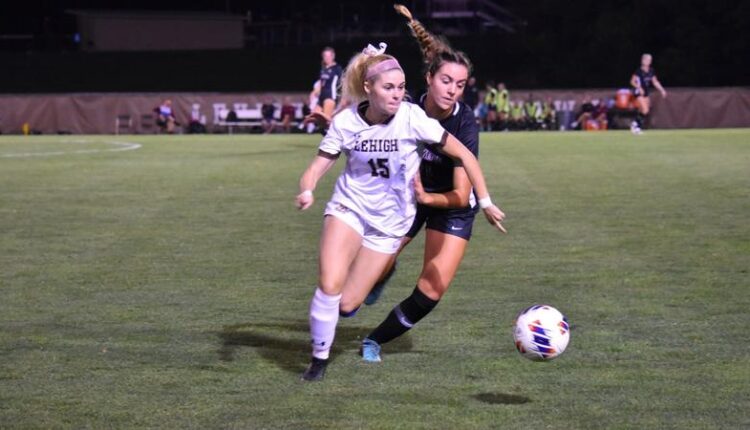 BETHLEHEM, Pa. – Behind a pair of first half goals and a strong defensive effort, the Lehigh women’s soccer team picked up its first Patriot League win of the season as the Mountain Hawks blanked Lafayette 2-0 Wednesday night at the Ulrich Sports Complex in the Rivalry, presented by Lehigh Valley Orthopedic Institute.

Senior Ryelle Shuey and junior Ava Schaller netted the goals as the Mountain Hawks defeated the Leopards for the second straight season. Lehigh is now 3-4-1 overall and 1-1 in the Patriot League.

“I was really pleased with the effort that the team put forward,” Lehigh head coach Lauren Calabrese said. “A lot of preparation and it’s also exam week so it’s really impressive that we were able to come out and execute. I think a lot of individual effort but we played individually as a collective unit so it was an amazing thing to see.”

It took just over seven minutes for the Mountain Hawks to go in front. Sophomore Corinne Lyght headed an Alex Odle corner kick towards an open Shuey, who finished from just outside the six-yard box for her second goal of the season.

“Alex had a great service,” Shuey said. “She lined it up on a play for us, we didn’t really have to do too much. She played it in and Corinne did a great job winning her one-on-one battle. She bopped it over and they gave it easy to me. All I had to do was bop it in so kudos to them and just everyone else. It was a full team effort tonight, front to back. It really just solidified us going into the weekend and it was a good first Patriot League win.”

Lehigh added to his lead in the 33rd minute behind a terrific individual effort from Schaller, who dribbled around several Leopard defenders before lobbing a shot over Lafayette goalkeeper Natalie Neumann.

“She’s been working really hard so it was really great to see her have a moment like that and we need more of that from her so it should give her a lot of confidence,” Calabrese said of Schaller’s fifth career goal.

The Mountain Hawks led 2-0 at the break and outshot Lafayette 9-0 in the first 45 minutes.

Lehigh added nine more shots in the second half, including four from Lyght. Senior Chloe Sherman also had an attempt to go off the post in the 64th minute.

Lafayette (2-7-1, 0-2 PL) had six shots in the second half, but only one on target. Lehigh first-year goalkeeper Maggie Ousouljoglou made a diving save to deny Sara Oswald in the 51st minute. The shutout is the second of the season for the Mountain Hawks.

“Give a lot of credit to our entire team that defended,” Calabrese said. “Coach Gina (Lewandowski) did a really great job in helping scout and prepare. Lafayette plays a really great brand of soccer so the fact that we were able to shut it down is really encouraging.”

Lehigh finished with an 18-6 advantage in shots and a 4-2 edge in corner kicks. Neumann and Lindsay Dwyer combined to make five saves for the Leopards.

The Mountain Hawks head back on the road this weekend as they visit Holy Cross Saturday for a 7 p.m. kickoff in Worcester, Mass. The game will be broadcast on ESPN+.

Mountain Hawks hit the ice looking for a bounce-back season