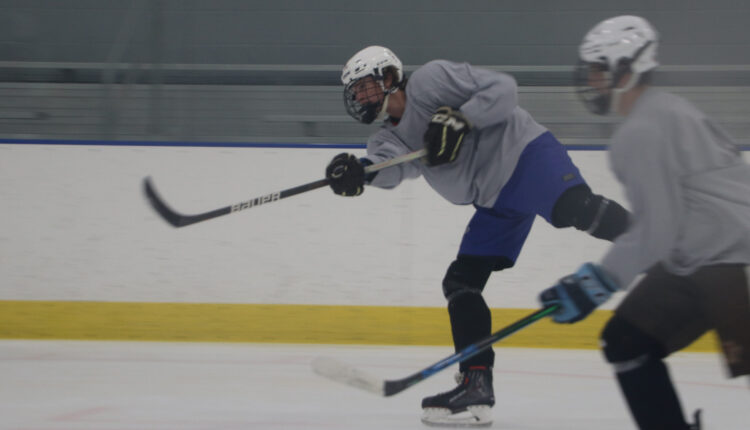 Mountain Hawks hit the ice looking for a bounce-back season

The Lehigh men’s club varsity ice hockey team welcomed its largest class of incoming players this season in hopes of being competitive in conference play and building upon goals from last season.

While still a club team, Lehigh ice hockey has a 22-game schedule including travel, receives funding from the university and has an academic requirement for its players.

The team will open its season on Sept. 23 at home against William Paterson University at the Steel Ice Center in Bethlehem.

After finishing last season with a record of 6-15-2, senior captain Mike Grise said this year’s team has a lot of potential.

“I think teams are going to be scared to play us this year, as we are always capable of upsetting good teams, especially with the goaltending we get from senior Kenny Burgess, who I would say is likely the best goalie in the conference,” Grise said.

The Lehigh hockey team does not compete in the NCAA. Instead, it plays in the American Collegiate Hockey Association’s Division I class. The team has been a member since 1996.

“Every year you try to add a good freshman class,” coach Josh Hand said. “We had a lot of good players who were interested in Lehigh, and we feel like the team will benefit from those guys.”

The Lehigh men’s ice hockey team practices on Sept. 19 at the Steel Ice Center in Bethlehem. The team is looking to bounce back after a 6-15-2 record last year. (Sophie Baraker/B&W Staff)

Freshman Nick Mulder said most players played in high school or were high-level youth players. All of the freshmen on the team, including Mulder, were recruited by Hand to play at Lehigh.

Grise said he thinks the team has a big incoming class this year because of the hockey program and academic reputation of Lehigh.

“I think we are doing a really good job with recruiting as we are a good school and a competitive program and keep getting better freshmen classes every year,” Grise said.

Goalie Jacob Brown said the team has been practicing twice a week since the beginning of September. He said their sessions consist of running through schemes and systems, exercising to get in hockey shape and, more recently, playing scrimmages against junior hockey teams.

The Mountain Hawks won 5-0 in a scrimmage against the Union Thunder, a youth hockey program from Union, New Jersey, on Sept. 21.

Brown said to improve his home record, the team will focus on not giving away leads late in games.

“It just comes down to focus and commitment to your scheme and to your responsibility,” Brown said.

Hand said he is excited to see what the team can accomplish this season.

He said their annual goal is always to make the playoffs.