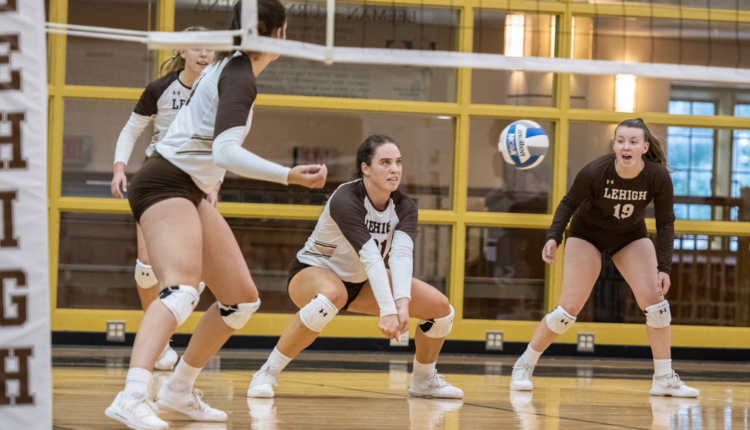 Due to the pandemic, all of the university’s fall sports teams have had their season canceled, creating a sense of doubt about the possibilities of a spring season.

Players and coaches are grateful for the season after having been out of the gym for almost a year.

“Honestly, I think it all comes down to gratitude,” said Hannah Wright, senior outside hitter. “I think we all realized how much we miss the sport when we weren’t playing it and we got a new perspective.”

Although the season was confirmed, the start of the semester was anything but seamless. As both fall and spring sports were played that season, there were logistical issues with practice times and rooms.

Winter weather has forced many outdoor sports teams to train indoors, and due to safety precautions as a result of the pandemic, the team has gotten into some conflicts with planning.

“As of now, we have two morning workouts a week and we were unable to attend some Fridays due to wrestling, but there was also some conflict between weather and fitness time,” Wright said. “We had lacrosse there [Grace Hall]and soccer right in front of or right after us. “

In a season full of possible change, second captain Amaya Smith and head coach Alexa Keckler said one of the team’s goals was adaptability. This feat could prove difficult, especially when introducing six newbies to the world of college athletics.

“The newcomers certainly had a hard time because they didn’t fully experience what it’s like to be a Division I athlete,” said Keckler. “During the preseason we practice once a day and get a few lifts, but that would have been different in a year without a pandemic.”

Keckler said she was impressed with the entire team and the work ethic they’ve shown in their time together. Smith said at some points that the motivation to move forward is difficult after spending a day in online classrooms. The suggestion to conduct team activities through Zoom made it difficult to stay connected.

With their first game in less than a week, Wright believes the team is ready to go. Circumstances weren’t ideal, but Wright said the team’s goal of the season isn’t to complain and focus on their games.

“It’s also reassuring to know that all the other teams in our league we’re going to play have gone through the same difficulties we have,” said Wright. “Our goals are definitely the same, they haven’t really changed just to play our game.”

The first game against Colgate serves as a benchmark to see how the team fares against the defending champions. Smith, Wright and Keckler agreed that Colgate would be the toughest match of the season.

With no fans allowed this season, teams have to rely on their own energy much more than on that of an audience. The lack of supporters in the stands makes communication in the field easier. However, both teams can hear what the other are saying. Wearing masks during the game will also be a new challenge this season as the importance of conditioning and communication increases.

Keckler said the team wants to win this season, but she and her staff will most of all look to the effort.

“I think for myself and the employees it is our goal for the season to really measure the effort,” said Keckler. “Who’s going to go out on the pitch and just play their hearts out?”

Mark Hall and the new Aaron Brooks led the Penn State wrestlers to a 23:10 win over Lehigh