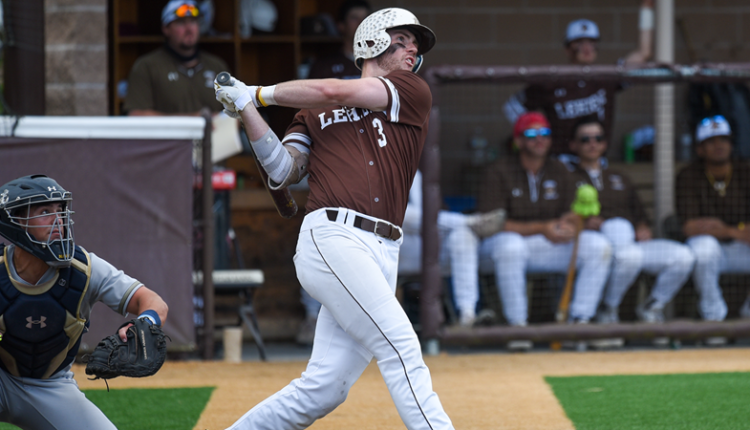 BETHLEHEM, PA. – For the first time since 2015, the Lehigh baseball program is preparing to compete for a Patriot League title. The Mountain Hawks (23-17) with the best seeds are hosting Army West Point with the second seeds for a Patriot League Championship Series showdown in three games starting Wednesday afternoon at 2 p.m. at J. David Walker Field in Legacy Park. The best-of-three series will determine who will automatically qualify for an NCAA Regional in 2021.

Lehigh and the Black Knights (26-22) split the four-game series at the start of the season and swapped colors on their home turf.

A straight win over the Army would secure Lehigh’s first Patriot League title since 2015 and the third overall win in program history. The Mountain Hawks defeated the fourth-manned Navy in three games in a semi-final win to get that point in the season. Lehigh must defeat the league’s other service academy to achieve the goal.

Lehigh was supported in the preliminary round by junior sluggers Joe Gorla and Gerard Sweeney, both of whom were the hottest players on the team after a solid first weekend. Gorla went 8-for-14 (.571) with two home runs and three RBIs, while Sweeney went 6-for-12 (.500) with a double, two homers, two walks and three RBIs. Newcomer Andrew Nole also had a tough weekend in the pits against the Midshipmen, hitting 0.417 (5-12) with a double and a run-in run.

On the hill, left junior Luke Rettig led the Mountain Hawks to a Game 3 win to win the series after throwing seven goalless frames that allowed only three hits with eight strokes. Left junior Matt Stamford threw five strong innings of relief in Lehigh’s Game 1 win to claim the win.

Gorla and Patriot League Player of the Year Casey Rother enter the Championship Series and lead the team with an average of 0.329. Both are also tied for team leadership in RBIs at 32.

Even though junior right-handed Mason Black only threw four innings in Lehigh’s Game 1 win over Navy on May 15, he still makes it to the series with the Black Knights as the formidable pitcher. Black is 7-2 with an ERA of 2.62 and 95 strokes per year.

Army West Point finished its semi-finals series with Lafayette in three games at Doubleday Field at West Point. Like Lehigh, the Black Knights took the series open and closed to claim victory. Compared to Rettig’s Game 1 performance for the Mountain Hawks, Ray Bartoli nearly went the distance, throwing 8.1 innings while allowing only three runs, two of them with seven hits, two walks and four strikeouts.

Though Anthony Giachin came into the series with a rift, the First Team All-Patriot League picking against Lafayette only went 11-11 off the record. In his last season with the Black Knights, he cut .293 / .463 / .421 in 48 games.

Lehigh and Army West Point split the four-game set in early April and are back in the Patriot League tournament for the first time since 2014. The Mountain Hawks have taken semifinals on the road in three games to advance to the championship series for the first of two straight appearances. The last time the two teams met in the finals was in 2005 when the Black Knights swept Lehigh at West Point to claim the title.

All three games, Wednesday, Thursday and Friday (if required), start at 2 p.m. and will all be broadcast live on ESPN +.