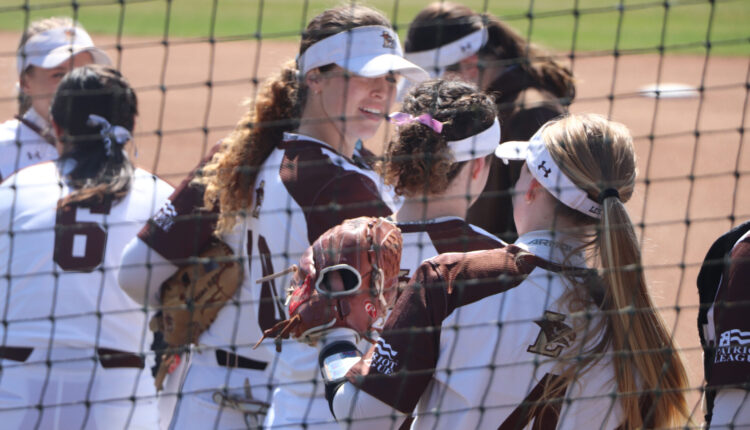 Light showers on Saturday morning did not stop Lehigh softball from winning both games in a double-header against Holy Cross. The Mountain Hawks took the first game 4-1 and the second 5-3.

After a short delay due to rain, the weather cleared up and allowed the two teams to start up their first game just before 1 pm at Leadership Field.

The Mountain Hawks got off to a slow start but managed to keep the score tied at one through the first three frames.

The stalemate continued until the fourth inning when senior Addie Kittle hit a two-run home run down the left field, bringing in senior Karsen O’Rourke who had stolen second base.

“I thought it was really big for the team,” Kittle said. “I know we needed the runs.”

Lehigh would score again in the fifth on an RBI single from junior Emily Cimino, keeping Holy Cross scoreless after its sole run in the first

This didn’t stop The Mountain Hawks, and they scored four runs in the bottom of the first, including a double from sophomore Amanda Greaney that brought in two runs.

The Mountain Hawks held this lead through the end of the game, picking up another run in the fourth on a Holy Cross fielding error.

Nori didn’t start out pitching the second game, but came in during the fifth inning and pitched three strikeouts in the remaining three innings.

“You have to take the game one pitch at a time and trust the team behind you,” Nori said.

Nori’s pitching gave Lehigh the competitive edge they needed to take home the win in both games on the chilly spring day.

“We honestly had a lot of fight and that was really really cool,” coach Fran Troyan said. “But I honestly feel like we’re going to play better softball tomorrow.”