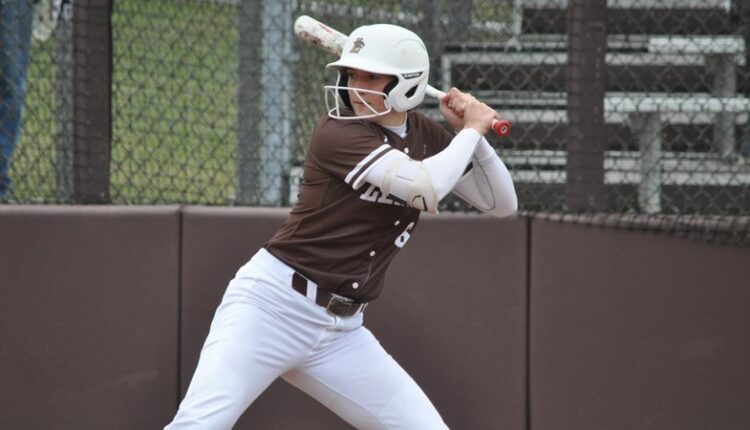 BETHLEHEM, Pa. – After spotting Holy Cross a 5-0 lead after two and a half innings, the Lehigh softball team battled back, scoring three runs in the fourth and three more in the fifth to rally for a 6-5 win over the Crusaders in Sunday’s series finale at Leadership Park.

Junior Emily Cimino went 3-for-4 at the plate and homered to lead off the fifth inning. Lehigh capitalized on three of Holy Cross’ four errors on the day to bring home the tying and go ahead runs.

Sunday’s win gives Lehigh a sweep of the three-game series as the Mountain Hawks improve to 16-12 overall and a perfect 7-0 in Patriot League play. Holy Cross falls to 11-23 overall and 3-6 in the league.

The Crusaders scored all five of their runs in the top of the third inning. Senior Gabriella Nori struck out the first two batters of the frame, but then gave up back-to-back singles. Holy Cross took a 1-0 lead when junior Josie Charles was unable to hold on to Erin Bengston’s line drive. The error was followed by three consecutive run-scoring hits, including a Jessie Nagel two-run double, as Holy Cross went up 5-0.

Lehigh pulled three runs back in the bottom of the fourth inning. Senior Jaelynn Chesson led off with a home run to left center, her 10th of the season and the 30th of her career. The Mountain Hawks proceeded to load the bases with two outs and senior Melissa Fedorka delivered a two-out double to left center to bring Lehigh within 5-3 after four.

Cimino led off the fifth with her third home run of the season out to left center. Chesson followed with a single and ended up at third base with one out. She came home with the tying run and Cannon reached on a throwing error by Holy Cross’ Callie Thibault. Cannon was caught stealing for the second out of the inning, but senior Karsen O’Rourke reached on an error to keep the inning alive. A walk moved O’Rourke into scoring position and the senior raced around to score the go-ahead run from second after Thibault was unable to field a grounder off the bat of senior Addie Kittel.

Bailey Chavez went 3-for-4 for Holy Cross and led off the seventh with a single, but sophomore Katelyn Young got Bengston to ground up the middle and senior Carley Barjaktarovich turned a 6-3 double play to erase that threat. Young then retired Megan Yurchick on a ground ball to O’Rourke at second to end the game.

Young earned the victory in the circle with 4.1 innings of scoreless relief. She allowed two hits and struck out two. Nori was charged with five unearned runs on six hits in 2.2 innings of work. She struck out five and did not walk a batter.

Lehigh will host Princeton in a non-league doubleheader Wednesday with game one starting at 3 pm from Leadership Park. The double header will be streamed on ESPN+. The Mountain Hawks are off from Patriot League play next weekend and will host Rider in a non-league Easter Sunday doubleheader to close out their 11-game homestand.