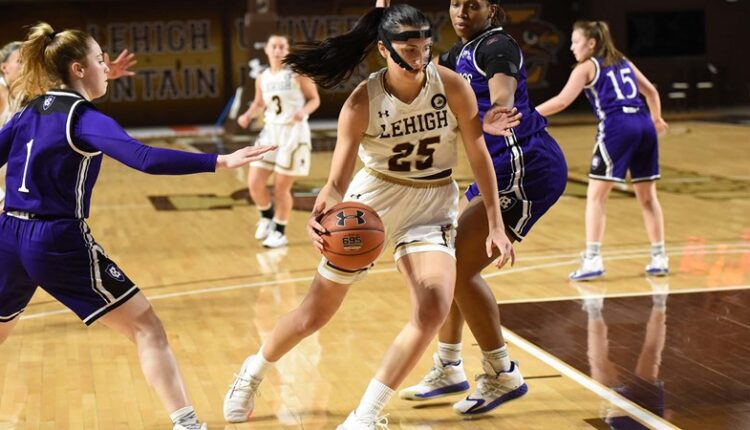 BETHLEHEM, PA. The fourth-filled Lehigh women’s basketball team beat the fifth seed Holy Cross at 30:11 in the middle of the Patriot League quarter-finals on Sunday, and despite a spike in the late third quarter, the Crusaders never got any closer than eight than the Mountain Hawks 75-57 win. With the win, Lehigh will advance to the Patriot League semi-finals for the third time in a row and will play at Bucknell on Thursday. Junior Emma Grothaus led the offensive with a season high of 19 points while newcomer Jamie Behar added a career high of 16 points from the bench.

“We have a really deep bank; we have a lot of kids who are capable goal scorers,” said Lehigh’s head coach Sue Troyan. “We don’t depend on one or two people on any given day. All year round it was different people who rose. Jamie had a big game today. I thought Emma played very well for us too. Frannie had one great first half. “

Hottinger scored 11 of their 14 points in the first half. Grothaus finished the game 8-of-11 from the ground, including 2-of-3 from 3-point range. Behar was 6-of-9 off the field, including 4-of-6 behind the bow. As a team, the Mountain Hawks knocked down 13 3-pointers (on 32 tries), more than their 10.2 average, which was fourth in the nation competing on Sunday.

“It’s usually different kids at different moments who stand up for us and that’s the strength of this team – the way we play on the offensive end, shoot three-pointers and have a balance between inside and outside play”, said Troyan. “I think we have more quality depth than any other team in our league, which can help us in this next section.”

In just under the first quarter, the Mountain Hawks split towards the end of the reporting period when they used a 7-0 run after 15 minutes to convert a 12-11 deficit into an 18-12 lead.

Holy Cross moved between 9pm and 7pm in the middle of the second quarter before Lehigh responded in a big way. The Mountain Hawks ran an 11-0 run that was crowned by a Grothaus 3-pointer to give their team a 2:23 advantage of 32:19. Holy Cross came within 11, but a 3-pointer from Katie Rice with just seconds left Lehigh halfway up 38-23.

The Mountain Hawks’ momentum continued into the third quarter. A few minutes later, they stumbled eight points in a row and finished with a 3-pointer from Mackenzie Kramer to take the 4:41 lead.

The Crusaders wouldn’t quietly walk away, however, finishing the quarter on a 14-1 run to return to fourth place within 52:44.

Senior Mary Clougherty threw down a 3-pointer on the fourth’s first possession, and Lehigh later used another 8-0 rise (which extended to 14-2) to dispel any doubts. The Mountain Hawks built their greatest lead when another Behar-Trey gave Lehigh a 73-50 advantage en route to the 75-57 win.

“It’s definitely a sign of growth for our team,” said Troyan. “When Holy Cross was running, we were talking about playing composed and doing the things we had to do. It was really going to start on the defensive. I thought Mary led the way in the fourth quarter. She got five seconds Phone call and a possessions or two later caused sales on a post-entry pass. “

“Resilience would be the word that comes to mind [when thinking about the team]”said Troyan.” Honestly, if you look back on last year, we went to Boston to play in a semi-final game and that was taken from us. The kids this year have been through so much just to have a season with the testing and COVID logs. It has not been an easy path, but the difficulties they have faced over the past three or four months prepared them well to get to this point. “

The Mountain Hawks will be back in action in the Patriot League semi-finals on Thursday when they travel to Bucknell to face the bison.